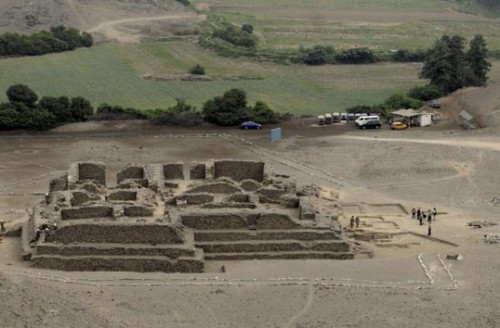 Pyramid at El Paraíso archaeological site in Peru, similar to the one that was destroyed.

What a shame. Sometimes you just have to wonder how people can be so irresponsible, so blind.

In case you missed it, a few weeks ago developers used bulldozers and heavy equipment to completely demolish and then remove a five-thousand-year-old pyramid near Lima, Peru. Afterward they covered the site with trash and burned it to conceal what they did and to make it look like they were just clearing some land.

When witnesses alerted police, it was discovered that the developers were preparing to destroy three additional pyramids.

Located at the El Paraíso archaeological site, the pyramid was part of a complex of structures that are the oldest in the Western Hemisphere. They were built by the little-studied pre-ceramic cultures that predate both the Nazca culture and the Inca Empire.

Archaeologist Marco Guillén Hugo was in charge of the research and excavation of this site and reported to El Comercio that he had reason to believe two private building companies were behind the destruction. 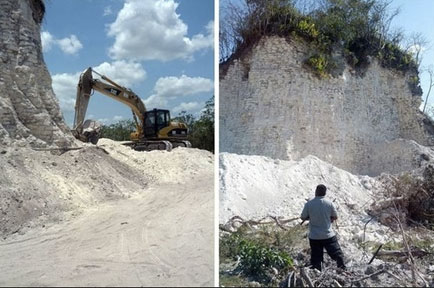 Noh Mul temple in Belize being destroyed for its limestone. Photo: Daily Kos

“This isn’t the first time they have tried to take over this land,” Guillén told the daily. “They say they are the owners, even though this land is untouchable.”

The Ministry of Culture has said that although the companies claim to own the land, it is actually under state control.

The destruction of this pyramid, archaeologists stated, was an irreparable loss for the culture and history of Peru.

Just last May, an ancient Mayan pyramid was destroyed in Belize by a construction company. According to the BBC: Head of the Belizean Institute of Archaeology Jaime Awe said the Noh Mul temple was leveled by a road-building company seeking gravel for road filler.