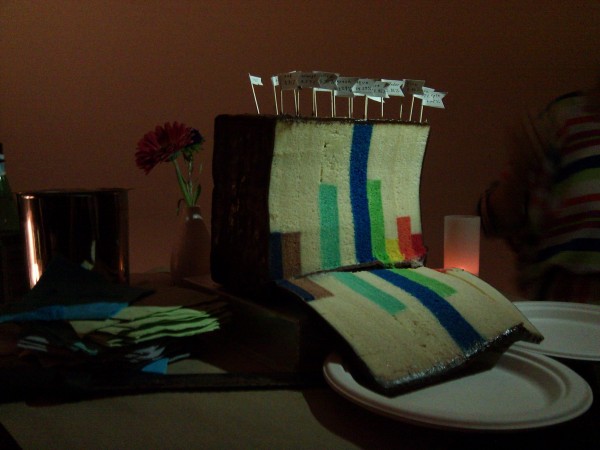 Open Space turned 5 today. And what a fantastic 5 years it’s been, thanks to the more than 400 people who have written, produced, or talked something into being with us, including our 45 columnists, 5 guest editors, and 3 developers; along with countless designers, interns, staff, and helpers of all kinds; and the more than 1 million people who’ve dropped in to see what we’ve been doing.

To celebrate, I asked lovely, brilliant Leah Rosenberg to create a birthday cake for us, and she responded with a survey sent out to many of the writers, artists, and friends we’ve been working with all this time. She asked us to suggest favorite flavor combinations, among other things, and to choose a favorite color. The cake when it arrived was a “data set” in the shape of a chocolate cube, with two rows of tiny white flags at the top, the back row labeling flavor (salt, cinnamon, lemon, and berry are some that I remember), and the front row indicating color, by percentage of popularity. When we sliced into the cake a graph was revealed, representing incidence of favorite color as answered in-survey by respondents. Blue won by a cakeslide?

Thanks, everyone, for your affection and attention. Can’t wait to see what we’ll all do next.