Proposal for a Museum 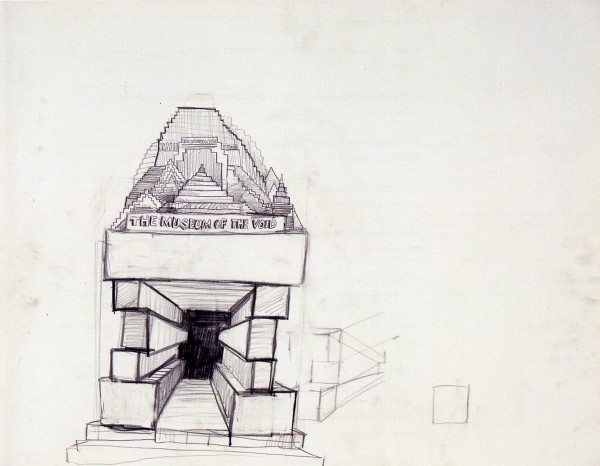 Robert Smithson, The Museum of the Void, 1969

In Summer 2013 SFMOMA will close its doors to the public to accommodate construction for an impressive expansion, currently planned to last nearly three years. And while these months of closure will be filled with off-site programming and exhibitions at other places, it will nevertheless be felt keenly among those who care about art and its institutions.

When we were asked to edit a series for Open Space, it did not take us long to arrive at this absence as our subject. But rather than a space for melancholy, perhaps the closure allows for a moment of reconsideration or reflection, the sort of pause that (for some of us, at least) is the precondition for thought. Just what should be the role of the museum of modern art today, more than 90 years since Katherine Dreier and Marcel Duchamp first inaugurated the Société Anonyme in 1920 as a “museum of modern art”? What are its tasks, its subjects, its forms of institutional organization and legitimation? How might they be productively reimagined for a present that Dreier and Duchamp (or Alexander Dorner, or Alfred Barr) could hardly have foreseen? Even as museums everywhere expand, or deploy franchises to the farthest reaches of the globe, the narratives of public life and universal modernization that once drove the museum forward seem to have faltered. In such conditions, “expansion” is both spatial and ideological, though the import of the latter is very often unspoken or ambiguous.

Understanding the renovation to be a sort of intra-institutional reimagining, we’ve engaged several people — writers, curators, historians, and artists — to share their own dreams and (counter) images of the contemporary museum. They were given the simple prompt to “invent a proposal for a museum in San Francisco”; their responses will be posted over the coming months. They range from the political to the utopian, from topical to oblique. Interspersed with posts from our guests, we’ll include our own selection of historical proposals for museums, drawing upon the fields of art and architecture in particular.

Our first proposal, by artist Zarouhie Abdalian, will appear tomorrow, with several more to follow. We hope you’ll check back as we develop this series through the spring.