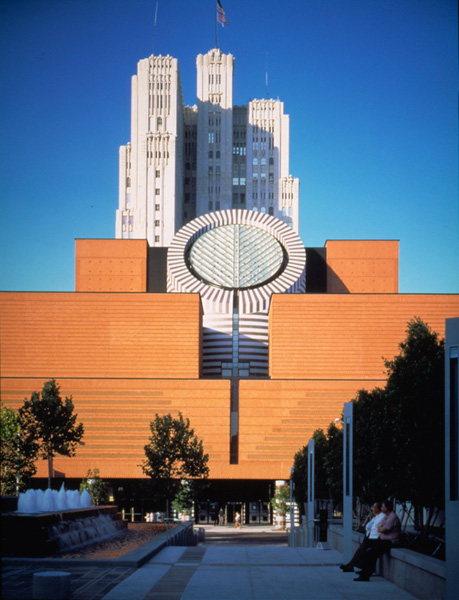 With SFMOMA’s expansion and renovation scheduled to start in 2013, I have been thinking about Swiss architect Mario Botta. Botta designed the current San Francisco Museum of Modern Art, which the Norwegian collective Snøhetta’s sleek new design will eventually gut and grow south and east to create a striated mesa-like mass. Botta’s red brick Third Street façade and black-and-white atrium tower will remain intact, but the current building’s stately formality, symmetric geometry, and byzantine flavor will be softened, and potentially overshadowed, by the pale new appendage looming behind it.

The expansion and alteration of Botta’s original design raises an interesting question about the value of boundaries — specifically, what stands to be gained by opening static situations to new influences. This question is not specifically architectural, and takes on extra weight when it leaps across disciplinary lines. Because the pending alteration of Botta’s design prompted this query, I thought it fitting that I poke at the question using Botta’s work, but not only the building he designed to be the San Francisco Museum of Modern Art.

In addition to Botta’s early drawings and models for the museum’s design, SFMOMA has in its collection a chair that Botta designed in 1990, five years before his museum commission was complete. At first glance, there is nothing particularly remarkable about the chair, but looking at it within the context of the museum collection I found myself noticing connections and affinities between Botta’s chair and a surprisingly diverse set of artworks. These connections suggest that the most informed, or at least most resonant, way to understand the chair is not simply as a design object, but rather as a point within a broad, interconnected spectrum of objects and images. 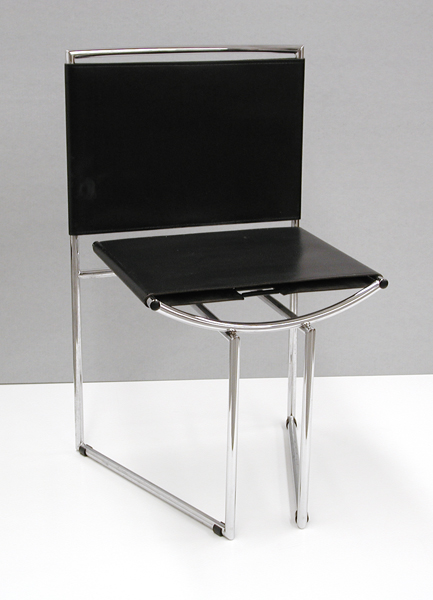 Physically, Botta’s chair is constructed from lengths of chromed tubular steel and simply upholstered with spring-tensioned black leather. When sat upon, the spring-loaded leather flexes under the sitter’s weight, creating curves that mirror the steel arcs that edge the chair’s seat and back. The chair is materially unremarkable: tubular steel was deftly used by earlier architects and designers like Marcel Breuer and Ludwig Mies van der Rohe, and leather and springs are quite common in furniture making.

What is unique about Botta’s design is that its form subtly suggests the action that a sitter’s body will have upon the chair. That suggestion produces a unique and disquieting tension that is echoed throughout the chair’s anatomy. Its pigeon-toed legs exude a knock-kneed awkwardness, which is heightened by the way the chair’s narrowly spaced central supports anthropomorphically suggest a pair of legs. These “legs” occupy the chair and dissuade prospective occupants from sitting down even as its soft curves entice them. The chair’s taut leather seat and back magnify the ambiguous energy by looking uncomfortable even as they imply comfort. The chair’s dynamic interplay of forces results in an energized stability that makes it a unique piece of design.

Beyond design, Botta’s chair surprisingly resonates with numerous artworks in SFMOMA’s permanent collection. The jagged, waxy, brushed masses of Franz Kline’s 1959–60 painting Lehigh V Span possess a similar angular, ambiguous gravity to Botta’s steel and leather construction. Botta’s chair also resonates with Tacita Dean’s 2006 redacted image/painting of a tree, entitled Beauty, in which Dean has isolated a giant gnarled tree by coating the rest of the enormous photograph in a thin layer of white gouache. The ghostly film separates the tree from its entangling kin, but not completely, and bits of the surrounding forest remain visible where they overlap the tree’s limbs and trunk, creating a melancholic partial presence. Bruce Nauman’s 1966 Wax Impressions of the Knees of Five Famous Artists is linked to Botta’s chair through its connection to the human body. The five sequential indentations in Nauman’s piece, like Botta’s chair, endlessly oscillate between being empty and full, present and absent. Its ambiguity is amplified by the fact that the imprints are all Nauman’s own knee-print.

The curious links that Botta’s chair evokes across genre, era, and medium complicate the distinctions that typically separate different aspects of cultural production. Some of these connections can be difficult to articulate beyond a gut sense that a group of seemingly unrelated things are all speaking to some common end. These unexpected points of convergence operate rhizomatically — stitching together seemingly unrelated fields of meaning. This nonhierarchical structure, by puncturing the boundaries typically used to define cultural objects, suggests the need to develop a more complex and interrelated understanding of images and objects. To effectively present this expanded understanding to the public will require new exhibition strategies.

To a careful observer it appears that SFMOMA is not only cognizant of this need, but actively seeking to foster a more far-ranging aesthetic discourse. The More Things Change,a rotating series of contemporary works from the permanent collection exhibited in the fifth-floor galleries last year, suggestively intermingled art and design objects in ways that subtly complicated both categories. This cross-disciplinary presentation was not overtly didactic, but still strongly suggests that the museum is actively looking beyond rote categories.

The pending Snøhetta-designed expansion and renovation of Mario Botta’s museum design could be seen as the strongest evidence that SFMOMA is interested in becoming more ideologically porous. If SFMOMA had simply wanted to expand, the architect selection committee would likely not have excluded Mario Botta from the list of designers approached for proposals. The inherently collaborative nature of Snøhetta’s design process is another clue, as is the site-responsive and publicly oriented direction the project has taken. The proposed expansion holds the potential to stretch the existing building into a newly discursive existence. 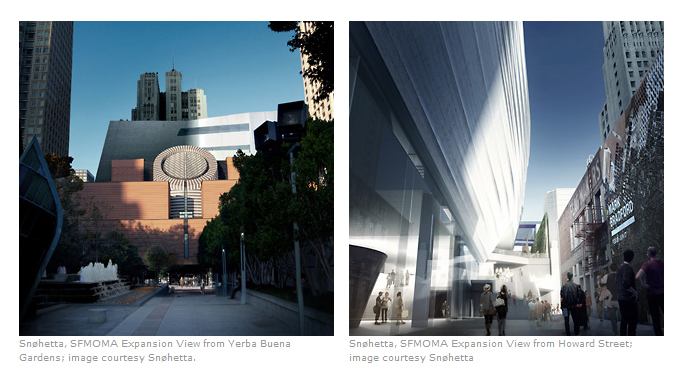 The new addition will inevitably destabilize the unified symmetry of the museum’s current building, but that might be a good thing. I am intrigued less by the look of Snøhetta’s sleek ribbed design for the new wing than by the hybrid entity that it will produce when coupled to Botta’s fortress-like façade. The effect will not be harmonious, but that does not mean that it will not be successful. The new addition’s pale undulating surface will set off the current building’s dense geometric stability. This distinct yet intertwined relationship will not only aesthetically reframe and extend the existing building, but also functionally open the museum to more fluid public interaction. The design’s central public space, additional entrances, free ground-level galleries, and numerous outdoor terraces should make it a space of connection as well as contemplation. This revamped structure could, in theory, engage a broader public and soften the boundaries between the objects and images presented and the concerns circulating beyond the museum’s walls — turning the museum from a repository for cultural treasures into a thoroughfare of cultural interaction.

Zachary Royer Scholz is an artist, writer, and occasional curator based in San Francisco. His diverse practice investigates situational potentials, institutionalized invisibility, and the fluid relationship between material and meaning. Scholz holds a BA from Stanford University, and an MFA and MA in Visual & Critical Studies from California College of the Arts. He has recently been a 2010 Kala Art Institute Fellow, and will start a residency at the Headlands Center for the Arts in September 2012. Scholz is a regular contributor to Art Practical, and is represented by Eli Ridgway Gallery.

Tags: Mario Botta, One on One, Zachary Royer Scholz, zscholz