Five questions to SFMOMA artists, staff, or guests … although today I’m posting all seven questions with Tammy Fortin, because I couldn’t bring myself to cut a single one. Tammy is a 9-to-5er at SFMOMA as the assistant to the curator of media arts, Rudolf Frieling. She is also a musician and writer. Tomorrow is also her last day at the museum. Miss you already, Tammy! 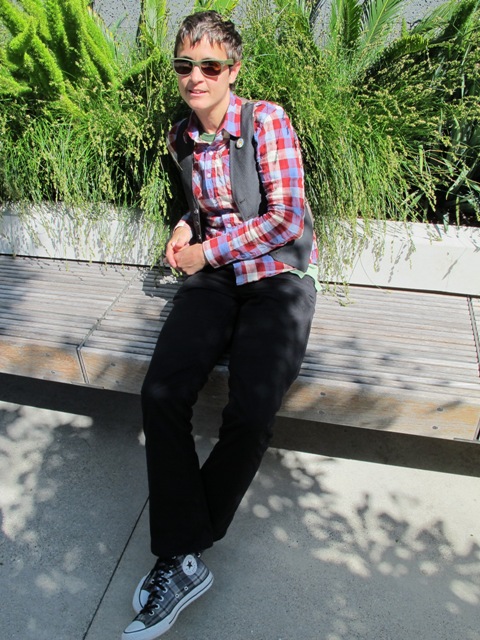 I collect a lot of things by accident. I’m a sentimental person. If you gave me a scrap of paper and you wrote a really nice note on it, I would keep it forever, I might even laminate it. But what I really collect are antiquarian books and rare editions of some of my favorite books. I have a rare Japanese first edition of Tropic of Cancer. Another book that I really love is an 1851 edition of The Archeology and Prehistory of Scotland. I collect books on geology or physics, anything that I think is going to offer some sort of revelation at some random moment in my life.

Does it have to be the afternoon? I feel like I would want to spend a really late dinner, around midnight. Federico Fellini would be really cool, he’d be pouring the Chianti nonstop and talking your ear off in Italian. I wouldn’t even understand a word he said, but I think he’d be really good company. And Chuck Barris from The Gong Show, I think he’d be an interesting fellow to hang out with. We could talk about the different guest stars on The Gong Show, like the Unknown Comic and and Jaye P. Morgan. Maybe … Paul Lynde. I would choose Chuck Barris from The Gong Show, Deney Terrio from Dance Fever, Paul Lynde from Hollywood Squares, and Federico Fellini for a nice dinner, a romantic dinner, with the five of us.

Spiral Jetty. I’m planning on having a really big house in Lansing [Mich.] because it’s pretty cheap there. I think I can get a mansion and put Spiral Jetty right in the living room. I’d have to steal it late at night with a dump truck. I think Robert Smithson would totally love that. He might think that’s a great idea. Well, if he were here. Maybe I should invite him to the dinner with me, Deney Terrio, Paul Lynde, Chuck Barris, and Federico Fellini.

Who was the last person to leave you a voicemail?

It was Rudolf Frieling, my boss. He’s probably wondering where I was because I was taking a three-hour lunch. Sometimes he pocket-dials me by accident, but I haven’t told him that. I can hear him doing all sorts of things. This is just between you and me and all the people who read this blog.

Yes. When I first came to San Francisco I arrived with just about $200 in my pocket and a bicycle and a bag. I lived with 10 people in a one-bedroom apartment in the Haight in 1990. We called ourselves the Skeezers. Even though the rent was only $60 a month, I still ran out of money in a couple of months because I couldn’t get a job. I was wondering what I could do for money, and I started to really think outside of the realms of what I would normally do. I even ended up in some retail shop trying to sell nylons to girls in the Haight. It was a weird fetish boutique, and I ended up trying to sell these girls fetish wear. I only did that for one day, and then I quit. Then I got a job at a bookstore. Then I was fine.

My favorite tool is a pencil. I like writing with a pencil. I prefer writing with a pencil over a pen. Up until about five years ago I had a really nice typewriter that I used. It was an Olivetti, and it was the race car of beautiful, old typewriters. It was a really nice machine. I ran out of ribbon and I couldn’t find any more, so I left it out on the street, and then a few years ago I saw that same exact typewriter made it into the design collection here at the museum. And I wonder, did they find my old typewriter on the street and acquire it?

You should ask me what my book is called. It’s called A Modern Champion of the World, and it’s almost done. It’s a novel, and it’s based on real and imagined happenings. It should be completed by December of 2012.

Tomorrow is Tammy’s last day at SFMOMA. She’s moving to Lansing, Michigan, which is the capital; Tammy says it’s a very cosmopolitan place. She’s moving with her wife, who will be the director of education at the new Broad Art Museum. Tammy doesn’t know what she’s going to be doing yet, but is hoping to be a kept woman.