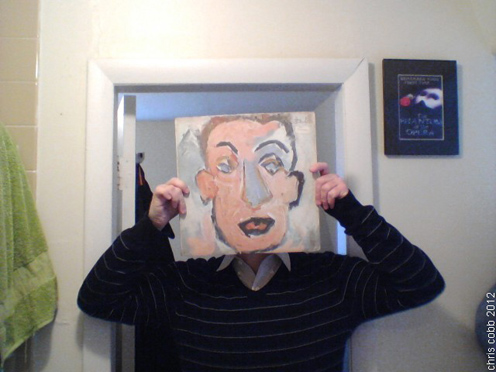 If I stand facing the mirror holding Bob Dylan’s self-portrait over my own face, do I not, in a sense, become him? If this is how Bob Dylan painted himself, then through this gesture am I not more like him than if I merely sang one of his songs out loud?

At some point as I recite his words and feelings, would our identities merge into one? Isn’t that what rock and roll is all about?

The clothes I’m wearing might not matter. My bad posture might not matter. My red hair might not matter. The fact that I can’t play guitar might not even matter because I know Bob Dylan borrowed from many artists, too — including some who didn’t play guitar, like Charlie Chaplin. But did Bob Dylan ever sit playing Woody Guthrie songs, trying to get them just right, trying to sound just like him? Sure he did. Isn’t music about the living conversation between the present and the past? Sure it is. Wasn’t he trying to get as close to being Huddie Ledbetter, Dave Van Ronk, and Jack Elliott as possible? Or how about Hank Williams, Jimmie Rodgers, Jelly Roll Morton, or Carl Perkins? Only after studying and playing their songs, getting up on stage, using the right guitar, getting the right sort of strings, and then really listening to Rabbit Brown or Big Joe Williams — that’s how he found where he fit in and introduced his own personal experience into the conversation.

So while I hold Bob Dylan’s face over my face and sing his song, I become him for the moments it takes to sing this part from “Love Minus Zero/No Limit”:

In the dime stores and bus stations,
People talk of situations,
Read books, repeat quotations,
Draw conclusions on the wall.
Some speak of the future,
My love she speaks softly,
She knows there’s no success like failure
And that failure’s no success at all