Colter Jacobsen, The Boy’s Book of Magnetism (detail), 2011. Installation view from The Air We Breathe at SFMOMA.

Non-normative gender and sexuality are not widely recognized as significant factors in either the creation or the analysis of art. I can think of only one significant exception: none would deny the relevance of same-sex love to the creation and understanding of the “political art” produced by Gran Fury, Group Material, and other collectives responding to the AIDS epidemic. Numerous shows have featured the art of protest generated by AIDS activists.

But this is not the kind of art major museums typically exhibit, let alone commission or collect. Only a handful of first-tier museums (most prominently, the Smithsonian’s National Portrait Gallery) have broken the pattern of institutional indifference/hostility to the proposition that queerness and art-making — especially the full spectrum of practices outside the realm of agitprop — may be intimately related.

SFMOMA has, of late, shown some initiative. The 2011 exhibitions The Steins Collect: Matisse, Picasso, and the Parisian Avant-Garde (SFMOMA) and Seeing Gertrude Stein: Five Stories (Contemporary Jewish Museum) opened opportunities to explore the historical intertwining of queerness and modernism. For the first time, last June, SFMOMA participated in the Queer Cultural Center’s National Queer Arts Festival to present a panel discussion with a queer cultural focus: Queer Culture and Artists’ Circles. The artist Tammy Rae Carland, Stanford English professor Wayne Koestenbaum, and art historians Wanda Corn and Jonathan Katz fleshed out modernism’s networks and their productive intersections with queer circles in places like Gertrude Stein’s salon. Later in the summer, in association with the Yerba Buena Center for the Arts, SFMOMA presented a new production of Virgil Thomson and Gertrude Stein’s tour-de-force of queer modernism, the opera Four Saints in Three Acts.

SFMOMA’s commissioned production, Four Saints in Three Acts: An Opera Installation, aimed to revive the radical spirit of the original event while reinventing the opera for today’s audiences. The initiative brought together video and performance artist Kalup Linzy, composer and musicologist Luciano Chessa, and the multimedia-based Bay Area chamber opera Ensemble Parallèle. Reviews were mixed. But then, so were the reviews of the original. Importantly, the opera opened SFMOMA’s doors to new institutional and artistic collaborators. In the same gesture, the museum acknowledged the Bay Area’s queer creative and viewing communities, paying tribute to modernism’s (and contemporary culture’s) queer matrix. 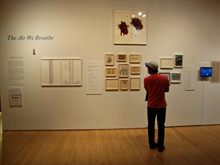 The title borrows from a Langston Hughes poem, “Let America Be America Again” (1938). The poet, speaking for people of color in America, exclaims, “America never was America to me.” The refrain reverberates with narratives of discrimination against all oppressed minorities, visible or invisible.

O, let my land be a land where Liberty

Is crowned with no false patriotic wreath,

But opportunity is real, and life is free,

Equality is the air we breathe.

In this poem, Hughes — his freedom fettered by both homophobia and racism — delivers the indictment:

There’s never been equality for me

Nor freedom in this “homeland of the free.”

Apsara DiQuinzio, the exhibition curator and editor of the companion book The Air We Breathe: Artists and Poets Reflect on Marriage Equality, believes that art “can rupture entrenched ways of thinking, alter paradigms, and broaden discourse that seems resolutely fixed.” To make this point, she challenged participating artists and writers to work with and through the social issue of same-sex marriage in a manner true to their diverse positions and creative practices. The result is a visual and textual mosaic charged with affect: tenderness, rage, irony, hope, humor, despair, confusion, insolence, rapture, solidarity, alienation — a full spectrum of human responses to the struggle for social justice. Can art, as DiQuinzio asserts, “prevail where policy and prejudice have failed”? This show, and the new level of commitment demonstrated of late by SFMOMA, rekindles optimism.