Commodified Cinema: Art, Advertising, and Commodities in Film, plays at noon on December 6 as the free Tuesday program. Museum and program admission are free. 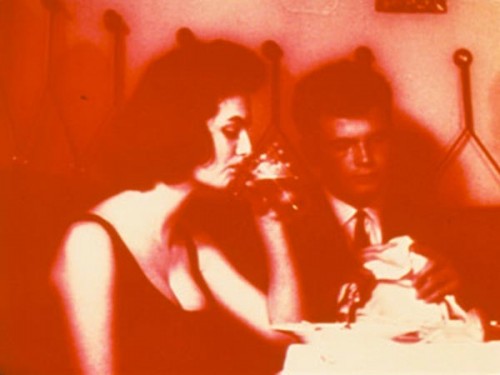 Some years ago, I tipsily cornered Peter Kubelka at a small gathering being held in his honor. Here was my opportunity to grill him regarding his stunning Schwechater, surely the greatest one-minute-long work of projected celluloid art ever made. It had launched a grenade within the depths of my psyche upon a first youthful viewing: here was a work of proto-Punk/Industrial art, made in Austria in 1958, which foretold the run of such cultural projects as Throbbing Gristle, for example. Wasn’t his film about the chaos lurking deep within the core of the nature of the universe? “You are a very observant young man,” he replied, with a charming, if slightly ironic Austrian grin. “But in point of fact, my film is about the exact opposite of all such notions — it is, in fact, concerned with the underlying order of the universe.” 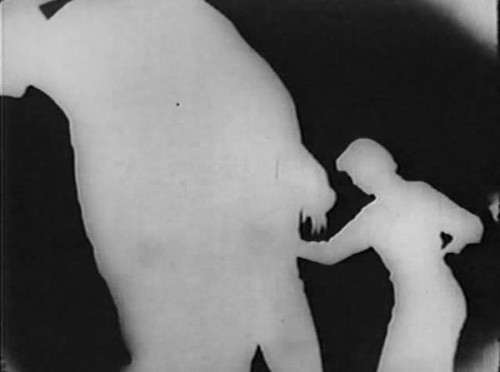 For many, the very lofty tenor of this cosmically inflected conversation would be belied by knowing its subject to be a beer commercial. Commissioned by the Austrian brewer Schwechater to produce a promotional short, the young Kubelka delivered the damnedest such effort ever to be screened for a board of directors. Flash-cuts of X-ray-like images of tavern imbibing alternate with spurts of black and what might be distorted star-fields in motion. From my post-adolescent perspective, the film seemed to be bourgeois consciousness irradiated, then dissected. The Schwechater company must have had a similar understanding: Kubelka’s work was summarily rejected. His previous film, Adebar, had also been commissioned as a promotional short, in this case a two-minute ad for Vienna’s Cafe Adebar. The results must have been more happily received, and it’s not hard to see why: the film is composed of variations of positive and negative images of people dancing to a loop of Pygmy music. The effect is of quiet delight. Although ostensibly drawn into the field of advertising, Kubelka was obsessed with spiritual and formal concerns, eventually formulating what he termed “metric cinema,” a film language based on the juxtaposition of frames rather than shots. Adebar was his attempt to create “ecstatic time.” The basis of Schwechater was “light impulses.” “I wanted to make something which looks like burning fire, or changing clouds (which practically depicts the way the universe is functioning) out of (this) stupid beer-drinking material.” Kubelka once defined cinema as “feeling in time, of rhythmic and harmonic being.” Of a later commissioned work, he said, “I was after cinematographic ecstasy.”

Schwechater and Adebar both play this Tuesday at noon as part of SFMOMA’s show Commodified Cinema: Art, Advertising, and Commodities in Film, programmed and presented by filmmaker (and SFMOMA’s Wattis Theater’s head projectionist) Paul Clipson. Clipson is onto something here: from its inception, cinema has been seen by hoity toities as the commodified form par excellence, a cultural equivalent to advertising. As time rolls on, the bitter ironies of these notions become painfully evident: due to their relative fragility as art objects when run through a projector, celluloid artworks have never worked as collectible items of envy, and the ongoing currency of critique in contemporary art has rendered much of it advertising for shallow, if politically correct ideology. In recent years, the ascendency of digital moving image technologies in all their many forms has been embraced by those with un- or semi-conscious resentment toward the photochemical art which ruled the psyche of the 20th century. Nevertheless, there are still aficionados who find their sacred within the supposed profane. Clipson’s chosen works, selected from a 50-year time span of world cinema, tap into a hidden vein of ecstasy and poetry. Constructed in the form of a whiz-bang time travel tour, the show butts up films achronologically in order to illumine different facets of a multilayered theme.

Following the initial Kubelkas is Nagisa Oshima’s Tomorrow’s Sun (1959). Unquestionably the sunniest work on the program, Oshima’s seven-minute short served as his directorial tryout upon completion of an apprenticeship at the Shochiku studio. The same year saw his debut in features; arguably the wildest ride in Japanese postmodern cinema was off and running. Taking the form of an extended trailer for a film never made (nor was it ever meant to be) in the teenager-themed Sun series, Tomorrow’s Sun is an unmitigated romp intermingling a host of youthful contract players engaged in a quadruple scoop of American-influenced genre-play (musical, gangster/noir, and Western, as represented by a Wanda Jackson-esque rockabilly-belting cowgirl). The proceedings are raised to an ecstatic pitch via joyous formal play with color, space, and the graphic potential of the Cinemascope frame. All these elements, combined with the film’s production date, are proof the New Wave wasn’t just French, but rather an international phenomenon. Oshima’s take on the Sun concept would become radically darker with the following year’s The Sun’s Burial (this title alludes to both the film series and the Japanese national symbol), and its nightmarish, virtually postapocalyptic view of Japanese society. There is nothing but delight in these seven earlier minutes, however, and the fact that this screening could represent Tomorrow’s Sun‘s West Coast theatrical premiere makes this advertisement for itself quite the lure. 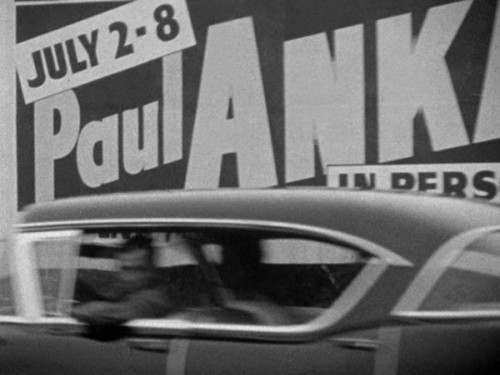 The promise of cinéma-vérité at its heights is the capturing of lightning in a bottle: ecstatic bits of seeming reality, impossible to create or re-create with actors in a studio. Lonely Boy (1962), made by Roman Kroitor and Wolf Koenig for the National Film Board of Canada, was one of the first vérité popstar portraits, and provided this micro-genre with possibly its leanest and lithest example. Kroitor and Koenig follow closely in the footsteps of ascending teen idol Paul Anka as he shuttles between gigs, approaches baby-faced devotees, attends to a mirror backstage with manic intensity, performs for shrieking teenybopper hoards, and genuflects before an all-powerful nightclub potentate (this last situation, at the adult-oriented Copacabana in New York, was surely assiduously studied by the young Scorsese; its mark is felt in both Raging Bull and Goodfellas). While ironies and minor absurdities abound (Anka’s purring manager: “I truly believe Paul will — in his career — prove to be the biggest star the world has ever known”), Kroitor and Koenig’s camera is blessedly responsive to their subject. This is fortunate, as Anka is worthy of attention: within this ambiguous, perhaps mocking encapsulation of teen star as commercial commodity is the potent reality of a newly minted incarnation of Dionysus confronting agonized Lonely Girl maenads amid ecstatic frenzy. Despite the veneer of technologized/mercantile society, human archetypal reality endures. 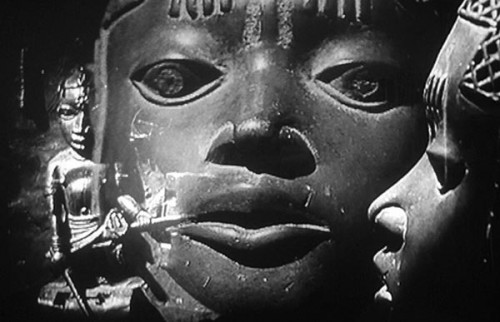 Today Chris Marker and Alain Resnais, 90 and 89 years old, respectively, are two of the grand old lions of world cinema; in 1950, when they were commissioned to make a documentary on African art, they were still pups in their 20s. Nonetheless, their crystalline/opaque visions were already formed; the 30-minute Statues Also Die (1953) evidences their readiness for the decades to come. In researching their subject, they became increasingly troubled by what they found: artworks seized from an organic and vibrantly sacred cultural context, then locked away in airless glass museum boxes; a panoply of peoples alienated from their cultures by colonial/touristic projections; an artificial economy of canned aesthetic simulations based on industrial models. The depressing facts are clearly delineated in the resulting film, but Marker and Resnais (perhaps naively) intimate in the film’s narration the hope of a resacralized world through the developing miracles of science and racial equity. Then, too, though their title admits all of mankind’s handiwork to be doomed to disintegration, their film itself is further cause for qualified hope: the images of African works Marker and Resnais have crafted with their great cinematographer, Ghislain Cloquet, evoke much of their intimate sublimity, and by rendering them within a seeming netherworld of the Platonic forms of “African art,” convey their problematic situation within Western culture. By providing a vision of the issues to hand in crystalline form, Marker and Resnais challenge them to be addressed. 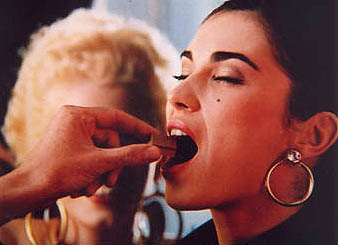 In 2003 Peter Kubelka released his first film in 23 years, Poetry and Truth. The years have mellowed the inventor of metric cinema, and this relaxed and airy work finds him returned to the long-abandoned world of advertising, this time in the form of a minimally edited, silent found-footage film. What once he found a repellent realm of horror is now a territory of joy, or at least pleasure. Poetry and Truth consists of four sections of multiple takes, apparently unused, of footage shot for various commercials: in the first, a man smilingly approaches a mirror in a shop window to hilarious effect: the technical requirements and conventions of this type of shot prevent him from actually seeing his reflection; delicious mugging ensues. The extended middle section is concerned with two reasonably beautiful models apparently on their knees. The blonde contemplates the brunette as a suit-cuffed male hand pushes piece after piece of chocolate into her mouth. It’s played for mirth, but we’re firmly on Sadean terrain with these power-play erotics: it’s a moment right out of Sàlo. Kubelka’s film finishes off with a series of eerie, darkly evocative images: a woman speaking to a girl with a doll; an uncannily shiny floor; the girl and a dog reclining on the shiny floor in darkness … These few images are all it takes to propose a Shining-esque innerscape. Poetry and truth abound; they are to be found everywhere.