The very prolific J. R. Carpenter seems, more than most writers of electronic literature, most keen on bridging the worlds between the digital and the social, creating a middle ground in her pieces where nature, community, geography, and politics can intermingle with the play of algorithm and the range of image-making abilities computers afford. Two major recent pieces, collected in the Electronic Literature Organization‘s second grouping of key works, aptly demonstrate her interests. “Entre Ville” is a project that investigates the Montreal neighborhood where Carpenter lived for years, not, as she states, the “French, or Greek, Italian, Portuguese, Yiddish, or any of the other languages spoken in my neighborhood [but the] visual, tactile, aural, sensorial vocabulary,” while a second work, “In Absentia,” opens up to include writing by her friends and neighbors, the texts combining to create a resonant world of lives lived in what is — from the perspective of the Google satellite maps that comprise its primary imagery — the postage stamp–size world of a major city. 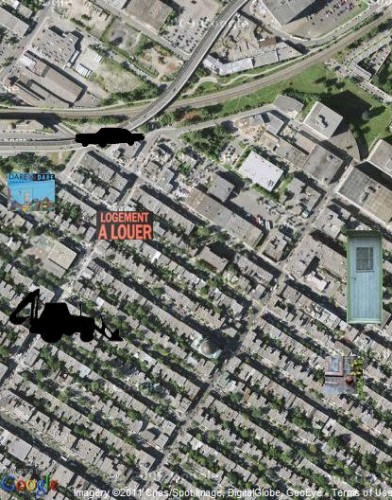 Replete with drawngs, diagrams, videos, photographs, and text in the form of poems and superimpositions, “Entre Ville” resembles some of Jason Nelson’s mixed-media works, but whereas Nelson eschews any easy association with location and cultural specifities, Carpenter — whose videos always use natural sound, suggestive of quiet early mornings — creates a meditative atmosphere, inviting you to an engagement more with objects and animals than with the culture and the detritus of the information superhighway. The primary modus operandi is the pop-up box: you click around the interface, opening up new windows of different shapes and sizes, some of which are nearly abstract, some of which contain videos, and some text sequences like “The Garden Path,” a short illustrated poem. This mode of e-lit as compedium or album of shorter pieces is something I played around with in my fake National Enquirer piece (a collaboration with the poet Kim Rosenfield) called “The Truth Interview,” and which we’ve seen earlier in the creepy piece “Mouchette.” It permits a work of e-lit to be, in a sense, nonessentialist — it is never entirely animation, fiction, story, never entirely original (a lot of “found” stuff gets in there), and not merely a collation of information, as in the “comedy of automation.” To a degree, these compendium pieces want to colonize the web itself — take over all of its properties, including the irrational juxtapositions and surprising usurpations of the screen that happen during half-attentive browsing.

Carpenter’s “In Absentia” uses Google maps as the basis of her interface, not unlike another piece in the ELC2 collection, “Senghor on the Rocks.” Again using Montreal, specifically the area Mile End that was feeling the full force of speedy gentrification, in this piece Carpenter collected stories from many of her neighbors, as well as wrote many of her own (which appeared in her first novel, Words the Dog Knows). Collaborative writing has been a mainstay of electronic literature from the start; major pieces include “The Unknown,” “The Last Performance,” and “Flight Paths.” “In Absentia” is, fittingly, largely in French; she writes, “Part fiction, part memoir, the multi-lingual, multi-author texts ‘haunt’ the neighborhood with stories of real and fictional tenants who have been affected by its structural transformation.” There is something uncanny about reading personal tales of living — of environmental experiences peculiar to the proximity of the human body — superimposed over satellite views of cities that seem vulnerable to missiles and predator drone attacks, and which in any case do not make clear where neighborhoods begin and end, making explicit the inherent antihumanist bias of Google satellite view.

Her new piece “Struts,” which uses an RSS feed from the Google API, continues this collation of image, facts, poetry, and animation into a sort of ambient text movie created during her residency at Struts Gallery & Faucet Media Centre in Sackville, New Brunswick. While it is probably ideal that the viewer experiences the piece as aestheticized information architecture, even letting it run in the background as the texts unfold, a credits page offers a bibliography of texts and some explanation of the work’s creation. 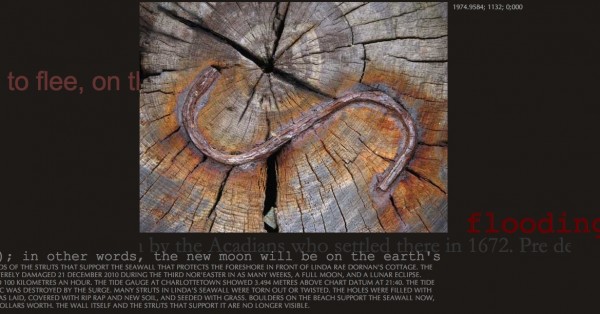