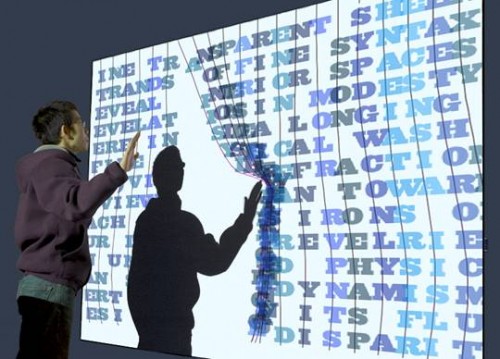 Daniel C. Howe, like joerg piringer and Erik Loyer, can be described as both an artist and a researcher. His homepage lists a number of projects, many in progress, some merely sketches, but he doesn’t make any clear division between research and art, not surprising given his array of degrees and residencies. An early project involved developing a series of 3-D fonts, which puts him in a tradition of experimental font makers including the previously mentioned Paul Chan, who replaced individual letters with words, scribbles, or abstract shapes; Peter Cho with his “Letterscapes“; and Just van Rossum and Erik van Blokland, who created the first “RandomFonts,” which resemble conventional letters but with visual variations — added noise, slight warps in the lines and points — with each click of the key. (A comprehensive list of randomized fonts can be found here.) The sketchpad portion of Howe’s homepage links to several projects involving image/photo manipulation, game-of-life simulations, 3-D interfaces, and algorithmically generated images.

Howe’s creative works, often in collaboration, unite his felicitous programming skills with interests in constraint-based and computer-generated literature. His collaboration with Aya Karpinska, “open.ended,” is a 3-D poem box — actually, two boxes, one inside the other — with small poems appearing on each rotating side. The user is able to manipulate this wordtoy and coax the inner and outer texts to merge, creating a new poem. “Roulette,” a collaboration with Bebe Molina, again uses boxes, but this time there are three, each of which contains an additional set of six boxes with words on the sides. The user activates the boxes by spinning and/or stopping them; with each iteration a unique piece of text is produced, often developing a narrative embedded in the database of words. His installation work includes “cave.cubes,” a truly immersive text experience intended for Brown University’s 3-D Cave environment, and “text.curtain,” a gorgeous tapestry of words that the user can move and shake, consequently triggering dynamically organized sounds which make it more visceral, encouraging both play and further reading as the bottom row of letters drops and a new set appears on top. 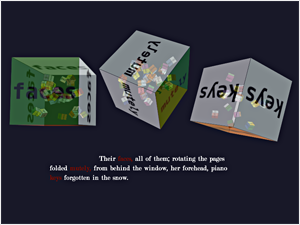 Electronic literature geeks might know Howe best for the “software toolkit for generative literature” he created, which he calls “RiTa” (I can’t find where he came up with this apparent acronym). “RiTa” has functions that parse sentences, employ Markov chains, analyze syllables (and even scan poetry), conjugate verbs, and find antonyms and synonyms, among other processes. In addition to this, “RiTa” contains a set of tools for animating texts, with functions for things like “easing” — having text speed up or slow down — which imitate physical processes.

“RiTa” was developed for the Processing language, which Ben Fry and Casey Reas developed for artists to “sketch” ideas for algorithmic art. It has developed into a powerful language itself, one to rival Flash’s ActionScript (also initially intended to be a simple script for graphic designers), and has been behind countless major art projects. Processing is entirely free, with several instructional books on the market, though their website, with its reference guides and tutorials, is itself a good place to start playing. (An even simpler programming language, which I use for my code-inept English students in my intro to e-lit course, is “Scratch.”) Howe’s new piece, which can be seen as either ambient text art, a weird game of solitaire for the computer, or an absorbing ongoing puzzle for a human viewer, is an apt demonstration of some of the powers of “RiTa,” as it uses algorithms to find the bridges between English words, Six-Degrees-of-Kevin-Bacon-style — not bridges of garbled nonsense but composed of normative English. You will spend either 10 seconds or 5 minutes staring at this thing; you will also see either a bunch of random words, or occasionally, if not always, engaging samples of minimalist poetry. 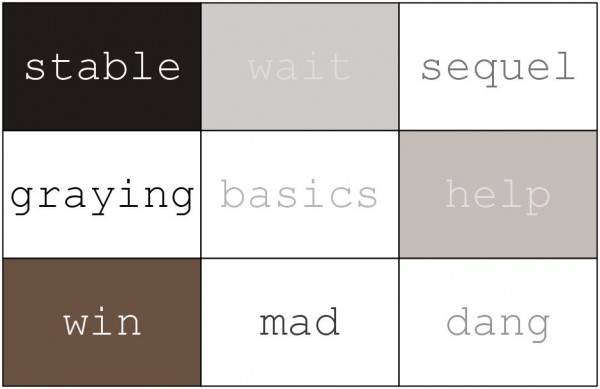 Daniel C. Howe is an artist and researcher whose work focuses on generative systems for image, sound, and text, and on the social and political implications of computational technologies. He has a PhD in computer science and an MFA in interactive media and digital literature. He currently lives in Hong Kong, where he teaches at City University’s School of Creative Media.