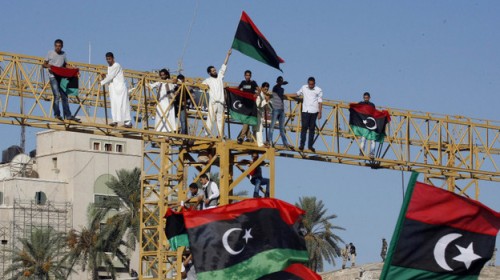 “The children are drawing pictures of the new Libyan flag, something that would have gotten them arrested only two weeks ago.” (National Public Radio, 31 August 2011)

The first time I ever heard of Tripoli was when, as a child, in a school classroom, our music teacher taught us to sing, among other things, the United States Marines’ Anthem, the “oldest official song” in the U.S.

From the Halls of Montezuma,

To the shores of Tripoli;

We fight our country’s battles

First to fight for right and freedom

And to keep our honor clean:

We are proud to claim the title

Montezuma, or Moctezuma (1466–1520), was the Ninth Aztec Emperor at the time of the Spanish conquest of Mexico. The last elected ruler, he invited his enemies to his coronation and drew blood from his body with the sharpened bones of jaguars and eagles. In his palace, this divine ruler, so powerful no one could look him in the face, drank spiced chocolate from golden cups. The name MOCTEZUMA is now a station on the Mexico City Metro line.

“From the Halls of Montezuma”is about the Battle of Chapultepec, which occurred during the Mexican-American War, 1847.

“Shores of Tripoli” refers to the “Barbary (from Heyreddin Barbarossa, c. 1478–1546, the red-bearded Ottoman admiral/pirate/pasha) Wars” in which the U.S. had had enough of paying piracy tributes to the Barbary States (Tripoli, Tunis, and Algeria) and effectively stormed the harbor, negotiating a peace agreement.