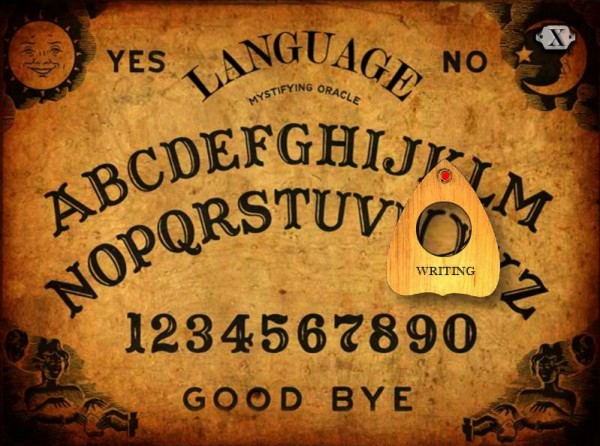 David Clark’s major internet works — including “88 Constellations for Wittgenstein (to be played by left hand),” “Sign After the X,” and “A Is for Apple” — are dense, encyclopedic Flash pieces that are replete with imagery, sounds, graphics, voiceover narration. Clark’s visual sensibility is probably closest to that of a graphic designer — not the clean, Swiss style favored by many digital text artists, but that of the New Wave, inspired by the visual sensibilities of artists like Robert Rauschenberg, designers like David Carson, and the “postmodern” theories of the Cranbrook Academy of Art. Each image, even when in motion, seems perfectly balanced, even if on the edge of chaos; he often alludes to a range of graphic design styles, though usually returning to his favored dense overlays of imagery and text, with the addition, of course, of sound. He’s also a master of curious GUI metaphors — “88 Constellations” takes, as you can guess, the star system and its mythical overlays as its inspiration, while “Sign After the X” uses, at times, a Ouija board, the Monopoly board, a schematized X-ray of the human body, and Lady Justice holding her scales (a row of Band-Aids arrayed in xs before her to tape over any transgressions).

These pieces can best be described as documentaries, but without a central argument so much as a chain of associations. Each takes some central concept and expands outward via seemingly arbitrary occurrences to pull nuggets of information from all fields of inquiry toward it. The text introduction to “Sign After the X” states: “This work examines how the letter x became part of Western languages and how it has been used as a cipher for otherness and the unknown. As a survey of meanings and histories, it looks at how the letter x has influenced the realms of law, psychoanalysis, medicine, technology, geography, and linguistics. The letter x is one of the most simple of graphic gestures, and yet it has a complex history and mysterious presence in our language. The letter x censors, alludes to, stands in for, is a substitute for.” The piece is broken up into mini-essays on a variety of “x” topics, for example, “Generation X,” which traces the term from its coinage by Jane Deverson in the sixties to describe the swinging London scene, to its adoption by Billy Idol for the name of his band, and on to Douglas Coupland’s use of the phrase for his famous novel, ending on a rather negative assessment of this generation, most notably their fate in what Clark calls “McJobs” — characterized, of course, by the iconic letter m.

These works of Clark’s are, like William Poundstone’s “New Digital Emblems,” huge databases of free-floating information and ideas that depict the world as being suffused with the ludic spirit — the spirit of play — making all of us Alices in Wonderland, the seemingly familiar into the deeply subversive. Clark and Poundstone are attracted to esoteric concepts in physics, math, history, and philosophy that can be turned over infinitely as mental conundrums, as if the shape of thought and not the thought itself were what mattered. They contribute to a genre that I think is unique to digital literature, which is the ludic documentary; other works, like Sharon Daniel’s “Public Secrets” and many of the other essays at Vectors, can be considered an extension of this. Clark’s work has also extended into installation (his video sculpture “Waterfall” uses a vending machine as an interface), feature films (Maxwell’s Demon, which I haven’t seen), interactive film (Meanwhile), and his lovely Bloomsday portrait of his friend Mary Beth Canty — created 101 years after Joyce’s famous day, using text from page 101 of the novel — called “Ulysses 101.”

Clark’s new piece, “Bodies of Water,” a collaboration with Nick Rudnicki, is a beautiful mating of elements of video and text art, the dancers’ bodies being used at once as human forms (i.e., “representational”) and signs. Water droplets, abstract lineation, text (mostly lists), and distinctive female forms — indeed, one of the dancers is visibly present — in muted colors coalesce into a fluid, modestly interactive visual space, defining a new idiom of internet sound-video-text art that, to my knowledge, hasn’t yet been attempted.

David Clark writes: “I am an artist who works with many different mediums: the internet, film, installation. Since 2002 I have gravitated toward working on the internet since the internet allows me to explore my interest in nonlinear narrative and access an audience beyond the art world or the film world. Themes and ideas in my work have been part of the films and installations I have been making for 20 years. I continue to work on installation and film projects but have focused my work on complex ‘feature-length’ net.art works like ’88 Constellations for Wittgenstein.’

“My first work for the internet was a project called ‘A Is for Apple’ that I produced in 2002 in collaboration with Rob Whynot, Randy Knott, and Ron Gervais. Since that time I have made a number of internet works, including: ‘Riddled with the Stinx’ (2003) (collaboration with Pascale Malaterre and Rob Whynot), ‘Likewise’ (2004), and ‘Ulyssess 101’ (2006).

“I am also part of a collaborative media collective called ‘computer.says.no’ with Jeff Howard, Chris Mendis, Nick Rudnicki, and Shelley Simmons. We formed this group at the Canadian Film Centre in 2005 and produced a prototype nonlinear ‘Shuffle Film’ called Meanwhile (2006).

“I live in Halifax, Canada, and I teach in the Media Arts Department at NSCAD University.”