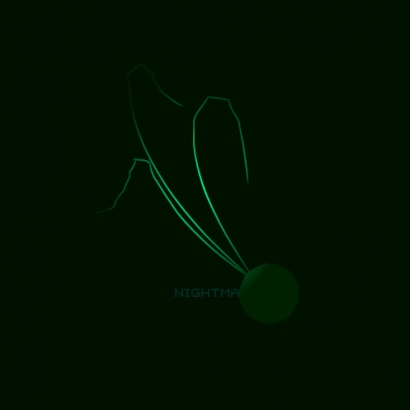 Erik Loyer combines the skills of a graphic designer, sound artist, and computer engineer in virtuoso, meditative works that negotiate fiction and science — the narrativized and the biological self — in eerie, seductive ways. “Chroma” initially impresses with its high production values, with its techno-rave aesthetic that harkens back to old-school vector graphics à la Tron. But “Chroma” is actually an involved science fiction that approaches questions of racial identity in an age of biogenetics. The story world, guided by three protagonists with the names Orion 17, Duck at the Door, and Grid Farmer Perry, is infused with the myth of the “mnemenos” and the search for purer states of interconnection. Rife with monologues, pseudo-scientific explanations of the physics of this new universe, poems, and diary entries, the piece includes enough text to comprise a short novel, perhaps in the afro-futurist vein of Delaney or Butler; add the video game elements, amazing sound score, voice acting, and kaleidoscopic abstractions, and you have a unique aesthetic experience. 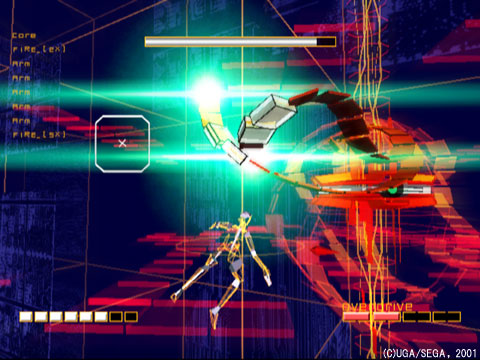 Not fighting the good fight in _Rez_

Gameplay in “Chroma” is motivated by the desire for greater aesthetic pleasure rather than mere survival, a perfect example of task-oriented interactive art. In fact, Loyer’s digital projects, more than most artists associated with electronic literature, can be called “synaesthetic” — in the same category of video games such as Rez (or the ubiquitious Geometry Wars) in which sound, image, and interactivity are choreographed into a unified, harmonized experience. In synaesthetic video games, user interaction contributes to “winning” like in most video games, but the user’s actions also set off visual and audio events that fall in synch with the automated visual and audio events, forcing the player into collaboration with the computer. The most vulgar form of a synaesthetic game would be something like Guitar Hero, where the user contribution is made explicit and apes some iconic pop song; at their best, synaesthetic video games permit the user to participate in a visual experience as wild and balanced as a painting of Kandinsky, while playing through a score rhythmically intricate and layered as something by Aphex Twin — each time different, refreshing the user’s desire for the new and beautiful.

Loyer’s work is incredibly wide-ranging. He has collaborated on a number of impressive nonfictional projects, such as “Public Secrets,” a massive documentary project by Sharon Daniel that investigates women in the California penal system, which allows the user, in a clean but expressive graphical interface, to access hours of audio by the inmates, framed by Daniel’s theoretically nuanced writing. His “staging” of N. Katherine Hayles’s essay “Narrating Bits” is equally impressive, playing with associative rather than logical linking of texts. It is an impressive foray into new forms of digital readers that escape from the basic page-scroll (or now page-swipe) that is the norm on laptops, Kindles, and iPads. He has been one of the central figures behind the only peer-reviewed journal of interactive essays, called Vectors, for which he designed a unique (if again not entirely efficient) interface which he calls an “intellectual paint program.” On a smaller scale, “Ruben & Lullaby” is an iPhone hypertext fiction placing tactility at the fore, allowing the reader to control the narrative by manipulating the emotional responses of the characters by stroking the screen (calmness) or shaking the phone (tension). “Big Cradle,” his contribution to my series of commissions for the SFMOMA blog, is a quiet, poetic work that shows how fear, care, and curiosity cohabitate our thoughts during the increasingly exotic practice of voyage by sea. 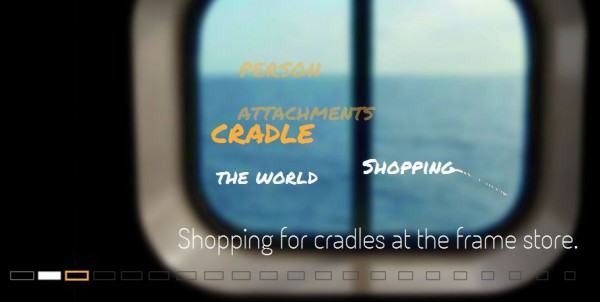 Erik Loyer is a media artist who uses tactile and performative interfaces to tell stories with interactive media.

His work has been exhibited online and internationally at venues including Artport at the Whitney Museum of American Art; the Digital Gallery at the Museum of Contemporary Art, Los Angeles; the Prix Ars Electronica; Transmediale; and IndieCade. Loyer’s award-winning website “The Lair of the Marrow Monkey” was one of the first to be added to the permanent collection of a major art museum, and his serialized web narrative “Chroma” went on to win the Best Digital Creation award at the Montreal International Festival of New Cinema and New Media.

As creative director for the experimental digital humanities journal Vectors, Loyer has designed over a dozen interactive essays in collaboration with numerous scholars, including the Webby-honored documentary “Public Secrets,” and his commercial portfolio includes Clio and One Show Gold Award–winning work for Vodafone, as well as projects for BMW, Sony, and NASA.

He is the founder of interactive design studio Song New Creative, and develops story-driven interactive entertainment under the Opertoon label, including most recently a critically acclaimed iPhone application entitled “Ruben & Lullaby.” A recipient of a Rockefeller Film/Video/Multimedia Fellowship, Loyer has a B.A. in cinema/television production from the University of Southern California.