Jason Nelson’s huge body of electronic literature, most of it done in Flash, might at first seem the work of an obsessive outsider; the fact that he is an American living in Australia might only confirm this assumption. Each of his pieces is replete with text, images (and often video), strange sounds, and most importantly, unusual interfaces that encourage as much play by the user as it must have taken the creator to design it. Rotating cubes, infinitely regressing images, rainbow-colored compasses, genetic code, Tron-like 3-D boxes (with a nod to Rez), and slot machines have provided inspiration for his variations on the GUI (graphical user interface), all in the service of exploring the varieties of recombination possible with digital text, not to mention images and sounds. 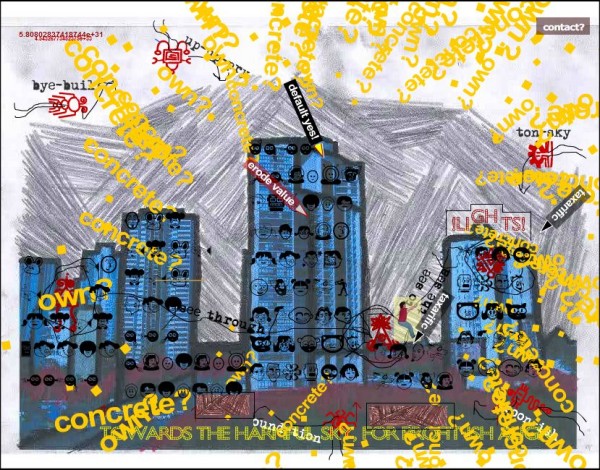 Nelson’s is a decidedly “messy” aesthetic; nothing of the economy in classically “good” graphic or interface design is present in his work. His visual arts heritage might be in the work of Rauschenberg or Basquiat, or the Assemblage artists such as George Herms, Bruce Conner, and Edward Kienholz. There is always a tension between the act of creation — or programming, making something clean and operational — and defacing — throwing a lot of junk at the interface to keep it lively, not to mention pump it full of content. The works always seem on the verge of breaking, and were these pieces not to have been created in Flash, which has remained stable since its introduction over a decade ago, they might very well have become casualties of the changing conventions of the web, which have made some of the earliest Java and Javascript works unplayable now.

Nelson’s work came to wider attention with his 2007 work “game, game, game and again game,” about which the website playthisthing, devoted to reviewing and promoting new games from the indie community, wrote: “[It] is not fun to a point of exquisite craftsmanship, but then turns around and surprises you with a sort of pleasure you didn’t quite expect. […] Surreal does not adequately describe the buzz you’ll get off this digital jungle juice. Belief systems are your enemies, storms of blue scribble with a chocolate center, patrolling in pre-programmed patterns. Levels are worldviews, representing addiction, religion, consumerism, Buddhism, and the design takes the psychological metaphors of Psychonauts down to 2-D, leaving you charmed and bouncing to the subconscious rhythms of thought-space.” 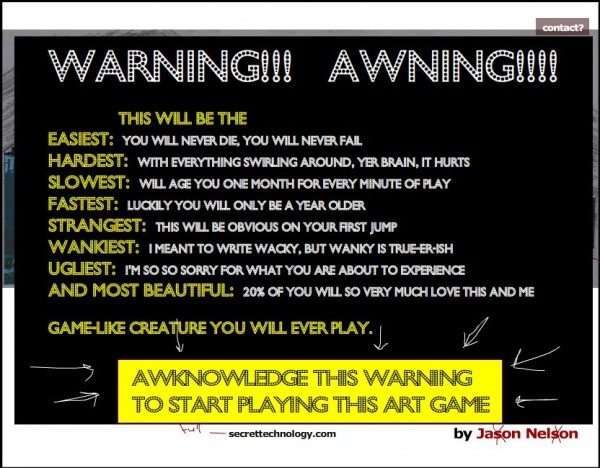 “Game,” along with his other variations on the video game, adds what was missing in interactive digital works, which is a basic sense of purpose in the interaction, one common to all video games: to “win.” The video game becomes what I have elsewhere called “tasked-based interactive art,” and therefore gently enforces as a sense of required time and commitment to the piece. But as the hapless hero in his most recent venture, featured here on the SFMOMA blog, the “hero” is rarely more than a mouse in a treadmill, harassed by all sorts of anxieties that can justly be blamed on our order- and image-obsessed society.

This is the first of the 9 pieces I’ve commissioned for Open Space, and it’s a doozy. Enjoy!

Born from the computerless land of farmers and spring thunderstorms, Jason Nelson somehow stumbled into creating awkward and wondrous digital poems and interactive stories of odd lives. Currently he professes Net Art and Electronic Literature at Australia’s Griffith University in the Gold Coast’s contradictory shores. Aside from coaxing his students into breaking, playing, and morphing their creativity with all manner of technologies, he exhibits widely in galleries and journals, with work featured around globe in New York, Mexico, Taiwan, Spain, Singapore, and Brazil, at FILE, ACM, LEA, ISEA, ACM, ELO, and dozens of other acronyms. But in the web-based realm where his work resides, Jason is most proud of the millions of visitors his artwork/digital poetry portal http://www.secrettechnology.com attracts each year.