The San Francisco International Film Festival and Pacific Film Archive’s film series became one of the most awaited events of the year for the Iranian American community in the Bay Area in the ’90s. Having lived through the absence of reports from Iran except for the state-controlled, sanctioned news, we were eager to find ways of reconnecting to the country that had transformed itself into an Islamic state since the 1979 revolution. The films that were circulating through the international festivals in the ’90s became the only alternative vision of Iran allowed by the government to cross borders, exhibiting a more poetic side of  Iranian culture, while hinting at a shift in the politics of the country.

Abbas Kiarostami, Through the Olive Trees, 1994

The films of Abbas Kiarostami Where Is Friend’s Home (1987; SFIFF ’94 and 2000), Life and Nothing More (’92; SFIFF ’93), and Through the Olive Trees (’94; SFIFF ’95) — what became known as the Koker trilogy — portrayed a layer of Iran that had remained untouched by politics. Created as tributes to the preciousness of life, the films shifted the focus to the everyday and the mundane. Floating between reality and fiction, they explored universal concepts such as innocence, courage, desire, belief. 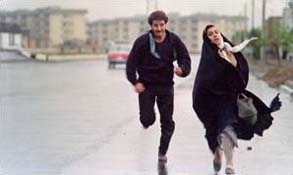 Other films followed, making the international festival circuits and acquiring major awards, including Mohsen Makhmalbaf’s Salam Cinema (1994) and A Moment of Innocence (’96; SFIFF ’97), Jafar Panahi’s White Balloon (’95) and The Circle (2000; SFIFF ’01), Rakhshan Bani Etemad’s Nargess (’92), and Bahman Ghobadi’s A Time for Drunken Horses (2000). The trend continued through the presidency of the reformist president Mohammad Khatami (1997–2005), and along with it boycotts and demonstrations around the screenings, pointing to the propagandistic goals of the films as new ambassadors of Iran. Most of the community, however, were supportive of the attempts at diplomacy through film, music, and culture, and believed in supporting the creative energy in Iran and its visibility and outreach outside the country.

Mohsen Makhmalbaf, A Moment of Innocence, 1998

Film production in Iran has experienced a drastic shift in recent years, with a much heavier controlling grip by the government on production and distribution. Frustrated by the constant struggle to pass through the multitiered approvals required for production by the Ministry of Ershad, many filmmakers have  stopped working in Iran, while others who have persisted have been battling censorship, arrest, and imprisonment. The Iranian films that are screened at the international film festivals have been increasingly produced outside the country. The two Iranian entries at this year’s  SFIFF, for instance, are Green Wave by Ali Samadi Ahadi, a documentary that uses animation, interviews as well as twiter/facebook/Youtube postings to recount the aftermath of the 2009 Iranian elections; and the 2010 Audience Award recipient at Sundance, Circumstance, by Iranian American Maryam Keshavarz. A love story between two Iranian teenage girls, the film would have never been able to come to be in a country like Iran.

Cannes Film Festival just announced that Jafar Panahi will be awarded the Carrosse d’Or prize for courage at this year’s festival in May. Panahi, an outspoken supporter of Iran’s opposition green movement, was convicted of “assembly, collusion, and propagandizing” against the regime in December 2010 and sentenced to six years in prison with 20 years ban on creativity of any kind or contact with the media. Mohammad Rasoulof, director of The White Meadows (2009; SFIFF ’10) and Iron Island (2005; SFIFF ’06), who was arrested along with Panahi, also received a six-year prison sentence. Panahi’s Offside (2006) — which screened at “Iran Beyond Censorship,” a tribute to Panahi at YBCA in March — will be shown at the award ceremonies at Cannes. Meanwhile, the controversial Iranian film Outcasts 3 by Masoud Dehnamaki, which ridicules the rivals of President Mahmoud Ahmadinejad in the disputed 2009 election, will be offered as part of the Cannes Film Market this year. 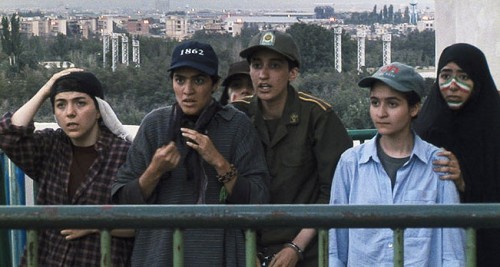