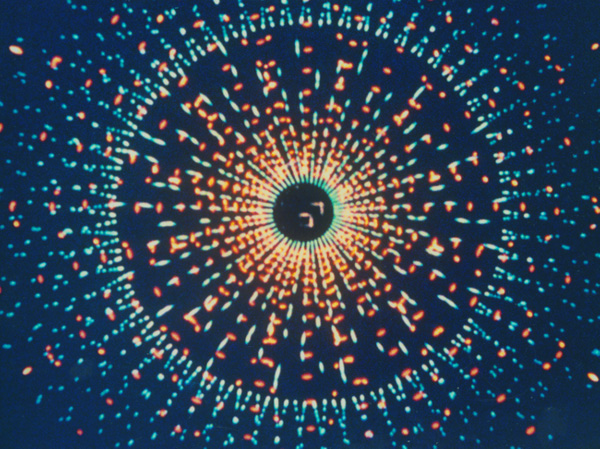 Jordan Belson is an enigma and a legend of the experimental film world. He has produced a remarkable body of over 33 abstract films over six decades, richly woven with cosmological imagery, exploring consciousness, transcendence, and the nature of light itself. His films have been called “cosmic cinema,” and the imagery is not terrestrial — it is of skies, galaxies, halos, suns, stars, auroras. He works with a vocabulary of film images he’s created since the 1940s, but does not use computers. He withdrew his films from distribution decades ago, thus many are difficult to see. Belson doesn’t give interviews, write about his work, or discuss his methods, leaving the viewer to derive his/her own experiences and meanings from his films. He states, “The films are not meant to be explained, analyzed, or understood. They are more experiential, more like listening to music.” (1992–94 interview with Scott MacDonald) 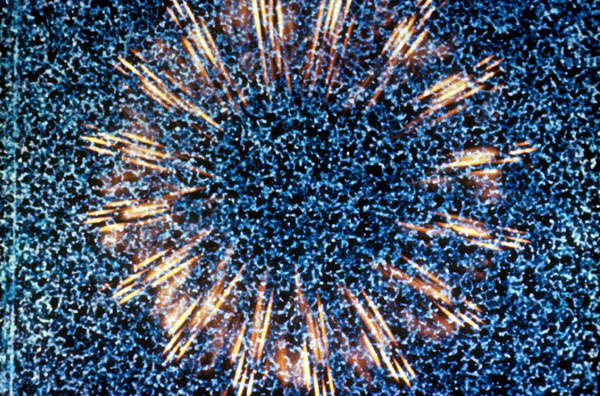 Belson has decades-long ties to the museum, so we’re pleased to bring his work back to the museum on October 14, with new preservation prints and some rarely screened early films. In fact, some of Belson’s major influences were films and kinetic light art exhibited at SFMOMA (then the San Francisco Museum of Art) in the 1940s–60s.

Born in Chicago, Belson moved to San Francisco at age seven. He attended Galileo, then Lincoln High, studied painting at the California School of Fine Art (now San Francisco Art Institute), and received a B.A. in Fine Arts from UC Berkeley in 1946. He was first a painter, until he attended the seminal Art in Cinema series at the museum from 1946–53. Art in Cinema exposed the San Francisco cinema community to European avant-garde films and new American experimental films. It was here that many young artists first saw films by Oskar Fischinger, the Whitney Brothers, the European surrealists, and the French avant-garde. Art in Cinema had a profound effect on Bay Area artists and painters, some of whom were inspired to make films.

Belson especially appreciated Fischinger’s films (calling him “one of my heroes”); the work of Norman McLaren; and Hans Richter’s Rhythmus 21 (1921–25). Belson made two short animated films in 1947–48, shown in later Art in Cinema programs; however, he still considered himself primarily a painter. Belson’s painting and film work soon merged with films he made with scroll paintings, including Caravan (1952), which will screen as part of the program this Thursday. 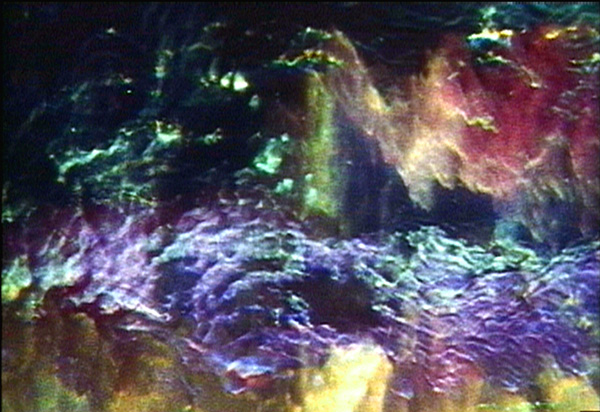 In 1953 Belson attended Fischinger’s performance of his Lumigraph (a mechanical color-light performance instrument) at the museum. The Lumigraph was performed in pitch darkness, and Fischinger created what he called “fantastic color plays” with spontaneous movements of colored light dancing to accompanying music. Belson was struck by the simple elegance and the mysterious soft, glowing images. Similarly, Belson later saw one of Thomas Wilfred’s Lumia color-light machines exhibited at SFMA, which became an influence on his later work.

A few years after Art in Cinema, Belson and Henry Jacobs created the legendary Vortex Concerts.

In May 1957 the first Vortex Concert was held at the California Academy of Science’s Morrison Planetarium. Featuring new electronic music from avant-garde composers worldwide curated by composer/DJ Henry Jacobs, Vortex was described by Belson (as visual director) as “a series of electronic music concerts illuminated by various visual effects.” In the blackness of the planetarium’s 65-foot dome, Belson created spectacular illusions, layering abstract patterns, lighting effects, and cosmic imagery, at times using up to 30 projection devices.

Belson filmed interference-projector patterns for Vortex, and later used some of these patterns in Séance (1959) and Allures (1961). Both screen October 14.

Vortex was an immediate success, and five Vortex series were performed through 1959, with over 38 concerts. Unfortunately, planetarium management did not share the press’s and audiences’ enthusiasm, and cancelled in 1959. The Vortex legacy is evident in 1960s psychedelic light shows, live multiple-projector shows, and VJ culture. Belson has even been called the first VJ!

Belson and Jacobs tried to remount Vortex, but were unable to find a venue and sufficient backing. In October 1959 Belson and Jacobs presented a “concert of electronic music and non-objective film” called Vortex Presents at the SFMA. This was a very different, single-screen event. Belson screened early versions of films he was working on, including one which became Allures, plus films by others. Only one evening of Vortex Presents occurred; though it was planned as a series, the audience reaction was disappointing. According to Belson, they came expecting a multiple projector planetarium show, but saw instead a film screening.

The Vortex Concerts were crucial to Belson’s transition to a new style of filmmaking — he stopped using traditional animation techniques and began working with pure real-time light sources.

Belson has continued to create a resplendent body of work. Other films with spectacular cosmic imagery include Light (1973); Cycles (1975), made with Stephen Beck; and Music of the Spheres (1977), all screening this week. His film Epilogue (2005) was funded by the NASA Art Program and commissioned by The Hirshhorn Museum. Belson’s films today are often installed in major museum exhibitions, and Center for Visual Music has presented special retrospectives of his work in the U.S., Germany, Netherlands, and Australia. Please join us for this very special event on Thursday.

Cindy Keefer curates, preserves, and writes on experimental film, and is working on a book about the Vortex Concerts. She produced the recent Belson and Fischinger DVDs, and Belson’s last film, Epilogue. She is currently the director of Center for Visual Music in Los Angeles.