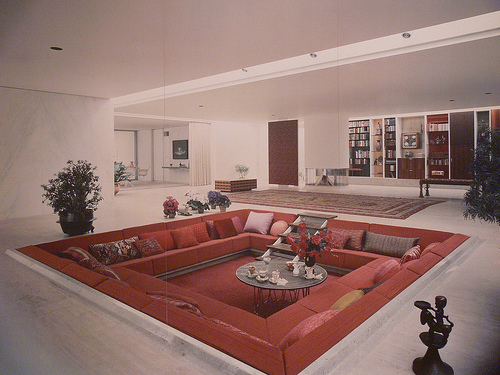 KVEC won’t look quite like this, but we’ll do our best.

Starting NEXT WEEK, Open Space will be hosting occasional, real-life Thursday-evening gatherings, here at SFMOMA. The idea is to take our online forum — which has been so dynamic, various, and generative — into real time and space. These will be dialogue-in-the-round/living-room-style get-togethers, organized around a variety of topics. Current and former Open Space columnists and contributors will host, developing programs to their own interests, and with an eye toward inviting any who turn up into the conversation and discussion. More details on what’s shaping up to be a fantastic opening season are here.

Next Thursday, September 23rd, is the night we scheduled the first of these events; however, our host, Anne Walsh, due to personal contingency, has had to cancel. Rather than cancel altogether, Dominic Willsdon and I thought we’d host the evening ourselves, and we have invited some superb conversationalists to join us: Renny Pritikin, director of the Nelson Gallery at UC Davis, and the poet Brandon Brown, both OS columnists; Patricia Maloney, editor of Art Practical; Meg Shiffler, director of the San Francisco Arts Commission Gallery; and Erin O’Toole, SFMOMA assistant curator of photography. Our subject, in the broadest possible terms: art writing, especially in and around museums.

For readers who don’t know, Dominic is SFMOMA curator of education and public programs, and he and I have been collaborating for the last several years on a number of language-centered programs, of which Open Space is one — that is, programs that have been striving to rethink some of the ways people talk and write, to and for each other, in a museum context.

By way of invitation to join us, we thought we’d begin by sharing some of what we spend our days talking (/arguing) about, and pose some opening questions:

DW: I hope Anne can convene something at a later date, but, as it happens, this is now an opportunity for you and I to do something we’ve wanted to do for a while: organize some kind of public discussion about writing, and the possibilities for writing that museums offer and deny. This is good as the first of these Open Space Thursdays, since our idea all along has been that Open Space, the blog, would be one way of allowing different modes of writing, or speaking, around the museum, and we’ve often thought that a live version of OS might be another.

The discussion on Sept. 23 will go in whatever directions the group takes it. But here’s what I want to ask about. I’m interested in how, through different kinds of writing, different kinds of voice and modes of address, museums do their work of managing cultural value. Those uses of language are more various than they were, and sometimes at odds with each other. Different languages for different constituencies. And things are shifting. It feels like the language of curating, scholarship and academic art history — the language in which traditionally museums have assigned value, language that aspires to be objective — is less secure. It is less and less the public language of museums. Many of the alternatives adopt a personal or subjective mode instead. I feel ambivalent about that. On one hand the personal brings a sense that valuing is provisional, partial, and up for grabs. On the other hand the personal is a soft sell — and a bit strategic, often. So, for me, one set of questions is about what forms of speech and writing the museum can promote and tolerate in good faith. How can museums, and museum people, write in a way that’s not strategic, evasive, defensive or bureaucratic, but still professional? Helping make professional language better, that would be worth doing.

SS: I’m interested in the potential for a museum as live, active, public space, that is, as discursive space that belongs to the people who populate it: the art professionals who work here, the artists, and all of us who come here to look at and think about art. The objects — and performances and ideas — in a place like this are about, we hope, our living culture, crises, politics, loves, and struggles, as well as history. I care very much about how we talk to each other about these things, and that we are able to do that. So my own aims with Open Space, from the start, have been a lot about diversifying what kinds of speech, language, and especially forms of writing might be employed in this venue to talk about art. (Or about anything else for that matter.)

For me this “biodiversity” (to use a term of yours) is not about over-valorizing individual subjectivity as the “alternative voice” or the “personal” one — although I absolutely find those things important. I’m also not so interested in a set of forms that are a supposed antidote to training, or to the authority of art historical discourse — I think those things are totally necessary. But I do have a desire to expand the modes by which collective talking and thinking about art can happen in this context. I come out of what’s often called an “experimental” poetry background, which is to say I’ve spent a lot of my life with nonstandard forms of writing, and am deeply appreciative of the expanded possibilities for thinking and communicating that those writings have offered me. Akin to something as simple as learning a new language, or new mathematics: more ways to think! I’ve been very interested in putting these various modes of writing “into service” here.

Also, I’ll admit, I’ve been quite interested in finding ways to put those modes “on view.”

Something else that’s probably important to mention is the way that — in part because of the structure of SFMOMA as a value-assigning institution — Open Space has been specifically working against a standard review model of art writing, that is, away from a judgment-as-value-assignment mode, and more toward trying to facilitate a collective keeping-open of participation in the many ways “value” is assigned.

DW: Biodiversity of language forms. More is better. Yes, I’m okay with that. My thought about professional language is more to do with secondary uses of language (as interpretation, commentary, evaluation), but I’d certainly like to know more about the museum’s potential as a platform for writing as language art—because I don’t have the knowledge to think very far about that. I’d be interested to know what it would be for the museum to include writing in its artistic program, as one of its curated or commissioned strands of activity. Would that be appropriate or valuable (for writing? for the museum? for whom?)? Is there a sphere of writing practice that can valuably be supported in the museum (just as there’s a sphere of performance that the museum supports, and that is sufficiently distinct from performance in other contexts and venues)? Another thing you and I have asked ourselves a lot over the last couple of years has been, “What does it mean for museums to produce writing, at a moment when the established institutional apparatus of art journalism is disintegrating?” That question is a little more about different platforms for publishing, and more about art writing than writing as art — it’s more the topic of Art Publishing Now in a few weeks — but it’s related to what we’re talking about here.

SS: Yes, absolutely to that question re: platform, it’s been particularly present for me, especially once we introduced the columnist/cohort editorial free zone element to Open Space. Another thing we’ve been saying in recent weeks that might be worth raising is whether or not criticism for other aesthetic fields — your examples have been wine, or architecture — has richer, textured languages that art criticism can sometimes appear to lack; or, perhaps art criticism lacks the lightness and expansiveness (the pleasure!) that writers handling languages in those other fields seem to give themselves license to employ.

DW: We might also ask about the artist’s voice. It’s seen as a special case, both authoritative and personal — everyone values it.

Please join us! It will be great to see you. The conversation will begin at 7 p.m. in the Koret Visitor Education Center on the second floor, and is free with museum admission, half-price after 6 p.m.