In Search of Christopher Maclaine 2: The THE END Tour - A Work in Progress 1

This is the second in a multipart series unofficially conjoined to the publication of Radical Light: Alternative Film & Video in the San Francisco Bay Area, 1945–2000, and the accompanying film series currently being presented by the Pacific Film Archive and San Francisco Cinematheque (in partnership with SFMOMA). Tonight’s show at the PFA features a semi-rare screening of Christopher Maclaine’s THE END, the exciting appearance of David Meltzer, and an incredibly rare visit by Wilder Bentley II, who in 1953 played PAUL, the 4th of THE END’s 5 major characters.

With my friend Brian Darr, proprietor of the great Bay Area cinephilia blog Hell on Frisco Bay, I’ve been scouting out the San Francisco locations used in Christopher Maclaine’s first (and arguably greatest) masterpiece, THE END. The results of this quest will be revealed over the next many weeks, starting with the very post you are currently reading. What began as an attempt to identify and document what physically remains of the places at which THE END was shot, has, however, evolved into a larger project to also analyze the film and its long-term covert cultural impact, and to identify all its many actors and extras (all of whom appear uncredited). At the beginning of our research, only two of the actors’ names were known to us, including that of Christopher Maclaine himself. After much searching, we were finally able to make contact with the other, and still very much extant, identified member of the cast, Wilder Bentley II (also known variously as Wilder Bentley the Younger, and Wilder Bentley, Jr.), who identified several of  THE END’s other cast members for us. Still, many of the film’s personages remain elusive. As THE END was made circa 1953, and much of its cast was in their 20s, it’s quite likely that many more are still with us, could be identified, and could themselves participate in the unearthing of further details. This is very much a project, therefore, on which YOU, dear reader, could have an impact, but BEWARE — although the numbers belonging to the cult of THE END are quite low, those for whom it strikes a chord have often found themselves obsessed. You, too, could find yourself devoting countless hours to exploring its minutiae, and contemplating its subtleties and genius… For me, this time has been infinitely rewarding, and I urge everyone in the Bay Area arts community, and elsewhere, to join in. I will credit anyone who is able to contribute (if so desired), and will update these posts as soon as new info is confirmed. The Tour, of necessity, supplies a digest of the film’s narrative (including many stills from its color and b&w images, and quotations from Maclaine’s voice-over narration on its soundtrack), as well as functioning as a critical and archeological project, but by all means acquaint yourself with the work itself! A poor video copy of the first 10 of THE END’s 35 minutes is viewable via this YouTube, and a superb video transfer of the entire film is available as part of the fantastic 2-DVD Treasures IV: American Avant-Garde Film, 1947–1986 set. Those who want to see the REAL THING but aren’t able to make tonight’s show can rent a print from the Filmmaker’s Cooperative (currently only 72 bucks! my God, what a steal!). Readers wishing further information regarding Maclaine may check out the intro to this series. But enough for now — let the Tour commence! …

NEW FEATURE: a Youtube of THE END‘s opening sequence is viewable here.

We make our way into THE END’s labyrinth via a rundown of many of its significant shots, beginning with the first of the film proper. The sound of an (oncoming?) speeding train has accompanied the film’s brief credits, and continues over shot #1: 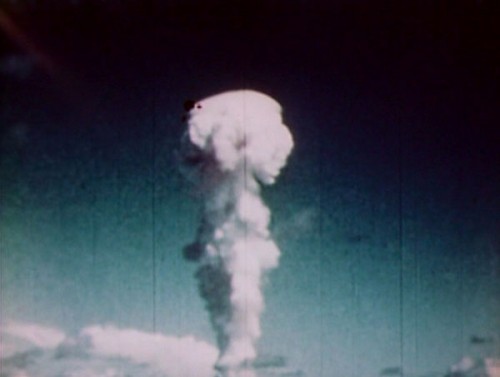 1) A stock-footage (still?) image: the mushroom cloud of an exploded nuclear bomb. 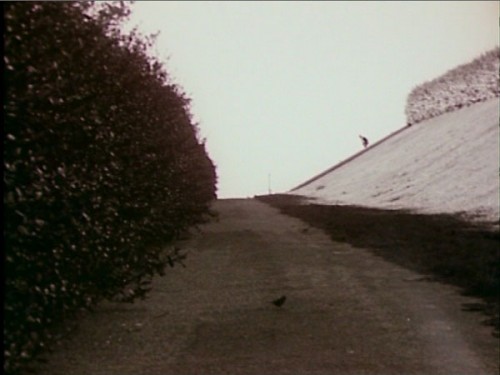 2) The first view of the first of THE END’s characters, WALTER, shot facing west towards the grand four-tier south central stairway of San Francisco’s Alta Plaza Park (near the intersection of Clay and Pierce streets), staged on the second tier from the bottom. At this point, Walter is a mere speck in the distance as he rapidly descends stairs. 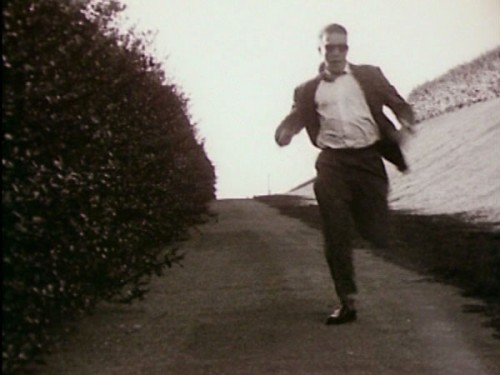 3) Previous shot continued. Walter (actor currently unidentified) storms into closer view. As he approaches, sound of train fades out, and one of the film’s musical themes fades in on soundtrack:  an unidentified piece for a very small orchestra of bagpipe and strings. It’s possible, unlikely as it might seem, given THE END’s no doubt minuscule budget, that this piece was composed and recorded specifically for the film. According to Stan Brakhage, Maclaine was highly proud of his Scottish heritage, played the bagpipes “beautifully,” and was the creator of the “bagpipe music in some of his films.” The ecstatic music of the pipes will feature sporadically throughout THE END, and much of the rest of Maclaine’s film work, and the instrument itself will appear in his later films BEAT and SCOTCH HOP. 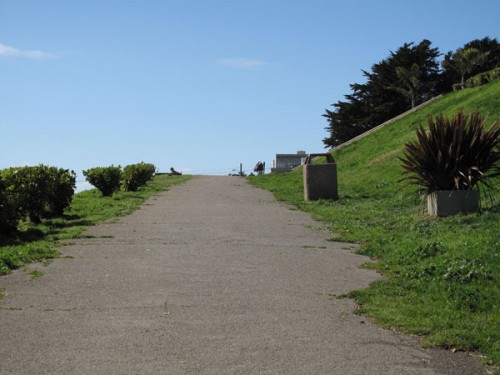 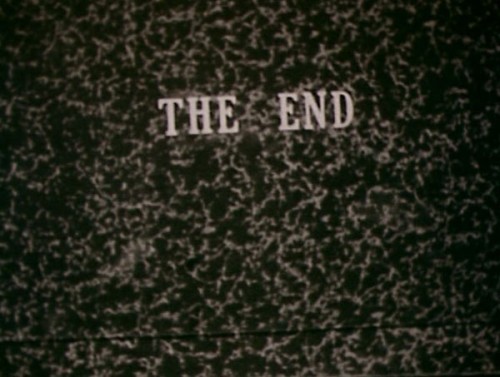 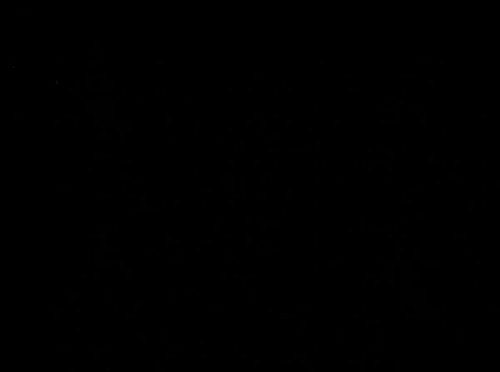 5) We cut to black, and music fades out. We hear the sound of a triangle being rung, then the first of several monologues by Maclaine delivered over black leader, and punctuated regularly by the ringing triangle:

Ladies and gentlemen, brothers and sisters … soon we shall meet the cast … Observe them well. See if they are not yourselves, and if you find none of them to be so, then insert yourself into this revue, for such it is — a revue of things human, a view of things past. A vision of a world no longer in existence, a city among cities gone down in fire … For the world will no longer exist after this day … The cast: these are some of my friends — I knew them well. They all have stories. We shall be able to learn a little about each of them before our time runs out. These people have lives they are all immersed in, but we see that they’d best lie down, and make themselves as peaceful as possible, if they only knew … But they do not know … They do not know that it is to be today … Next year, they think. Next week, tomorrow … Later … But it is later than they think. They should not make life so complicated for themselves, now that they have brought about their own destruction. But they cannot avoid the complexities, for death is their only alternative. Enough for now. Let us visit our first friend on his last day …

After this introductory monologue winds down, Maclaine treats us to a semi-furious montage in which all of the film’s as-yet-unseen major characters are briefly glimpsed, to the accompaniment of a second unidentified recurring musical theme, which sounds to my ear produced by harpsichord, violin, and oboe, perhaps? (Help us out here, musical people — you can hear this piece on the YouTube.) The following stills represent many, but not all, of the montage’s images: 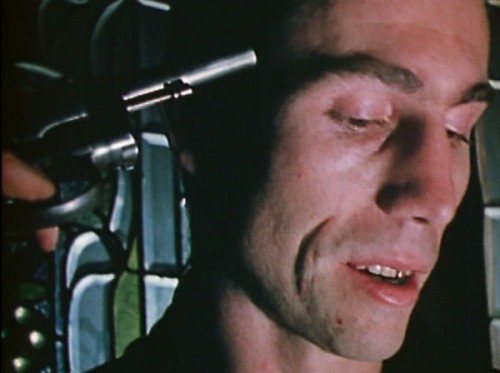 6) JOHN (actor currently unidentified), a poet/comedian who will prove to be the third of THE END’s major characters, characteristically clutching a revolver to his head, as he (perhaps) recites from his oeuvre to an unseen audience. 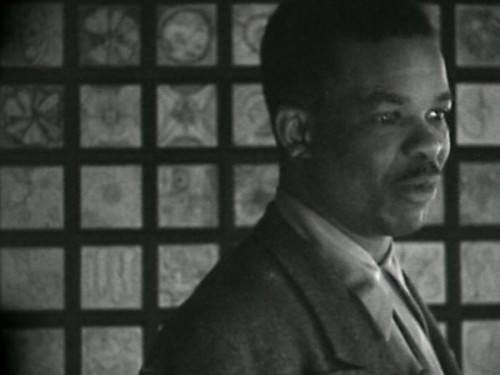 7) An unnamed character Brian and I have taken to calling “DANCER.” The actor playing Dancer has been identified as Stanley Willis by Wilder Bentley II. 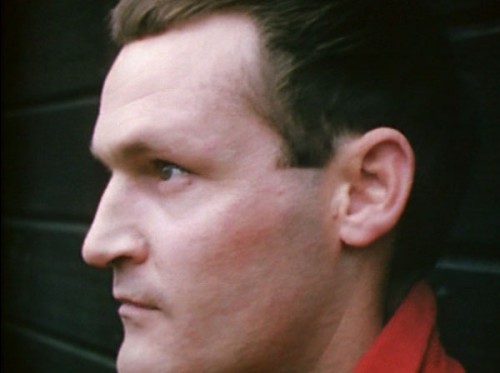 8 ) Our first view of Chris Maclaine himself, playing major character #5, identified only as “A CHARACTER.” 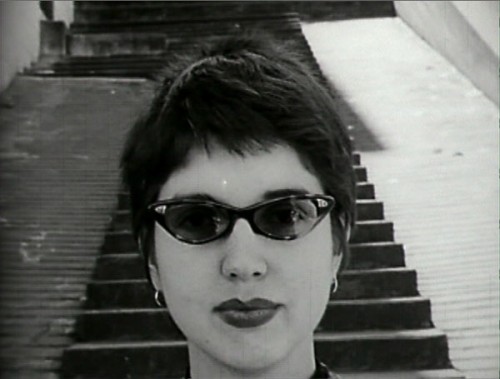 9) A character Brian and I refer to as “SHADES.” The actress playing Shades has been identified as Jane Conger Belson Shimane by Wilder Bentley II. 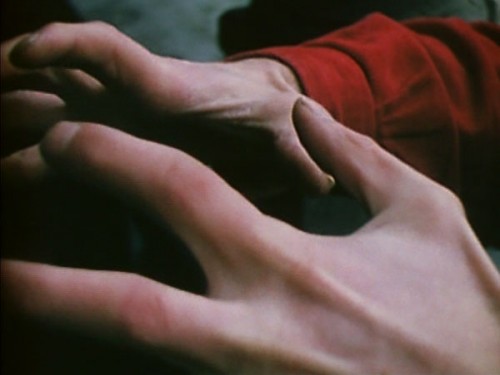 10) A close-up of Chris’s hands bent on destruction. Note the deeply saturated red of his shirt. THE END’s color shots were photographed in glorious Kodachrome reversal, the only color film ever made not known to fade. Kodak, in its infinite wisdom, discontinued production of Kodachrome in 2009, and if you have any unshot or unprocessed rolls, hurry up! Processing will cease at the end of this year — just three short months away! 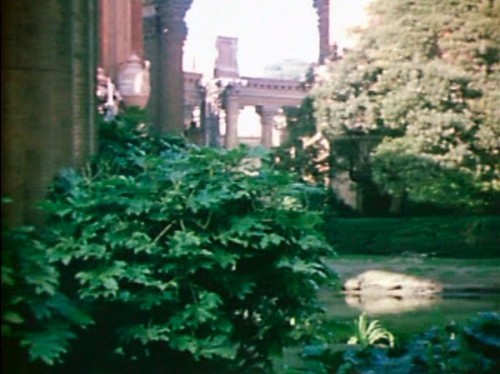 11) San Francisco’s Palace of Fine Arts, a recurring location in THE END, about which there’ll be more to say in later posts. 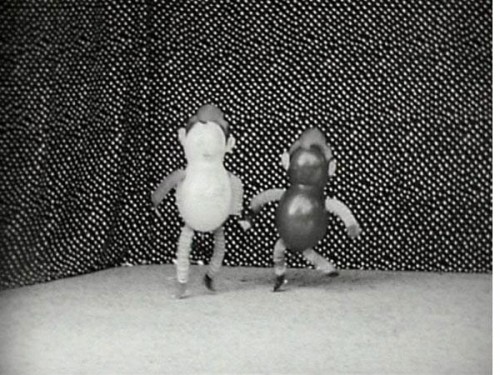 12) A display of white and black dancing dolls by a street vendor/performer (?). These inflatable plastic dolls, manipulated by strings, will be a recurring image in THE END, as a similar pair also were, if I’m not mistaken, in Ralph Ellison’s Invisible Man, published in 1952, the year before THE END’s 1953 premiere at the San Francisco Museum of Art. 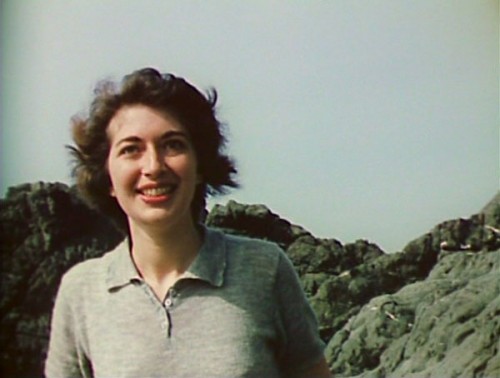 13) An unnamed character (played by an unidentified actress) Brian and I refer to as, alternatively, PIPEWOMAN or PIPEGIRL, for reasons which will become clear later. 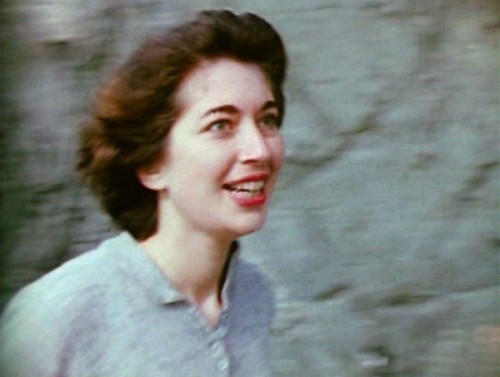 14) Pipegirl, and her consort, whom Brian and I call MATCHMAN, are the sixth and seventh of THE END’s major characters. Usually, the film’s “cast” is referred to containing five of these, but Pipegirl and Matchman, although unnamed and undiscussed by Maclaine in his role as the film’s narrator, will be seen to be every bit as important — and arguably more so — as any of THE END’s “official” characters. 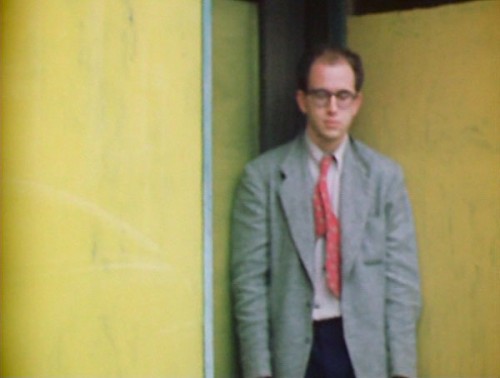 15) CHARLES, the second of THE END’s major characters, who takes center stage starting with the fourth post in this series. The actor playing Charles has been identified by Wilder Bentley II as Darryl Solari. 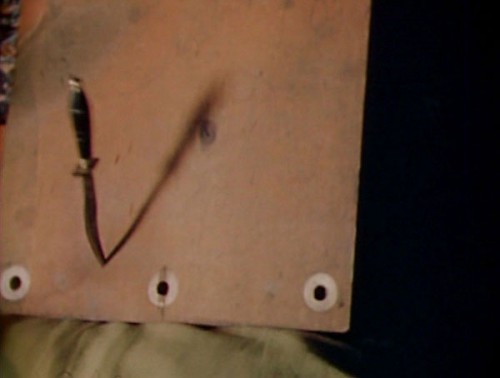 16) A knife, having flown through the air, hits its target. Knife-throwing, according to Stan Brakhage, was one of Maclaine’s obsessive hobbies. It will play an element in section 5 of THE END, which is devoted to the character played by Maclaine himself. 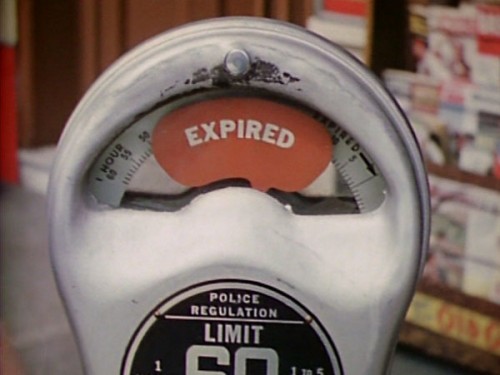 17) This “expired” San Francisco parking meter is another of THE END’s recurring images, most closely associated with Walter, but redolent of the film’s view of humanity and the earth, which is arguably one of the earliest forerunners to contemporary culture’s culture of fear regarding potential environmental collapse. 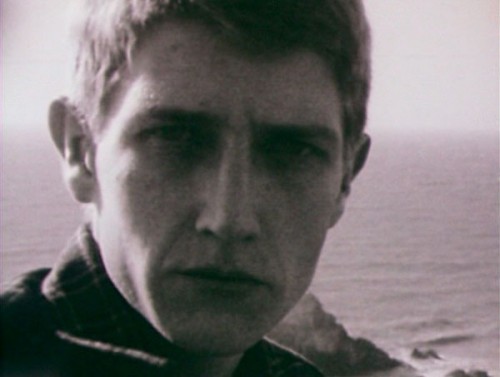 18) PAUL, the fourth member of THE END’s “cast,” and the subject of later posts in this Tour. The actor playing Paul to our knowledge was first identified in print (in Film Culture #70–71, 1983) by J. J. Murphy as Wilder Bentley, Jr. This image was photographed 57 years ago, when Wilder was around 25. Come see him tonight at the PFA at the age of 82! Wilder’s quite the lively character …

We have ridden the whirlwind, and by the conclusion of this montage, the viewer is most likely excited and disoriented, and ready to enter the first of THE END’s stories.

Click as indicated for the intro to this series.

If you have any information or (nonpublic) feedback to contribute to the Tour, please click here.