I just spent a whole month of my life glued to all manner of screens devouring world cup football (or soccer as you call it here in America). There were many things I should have been doing, instead I was watching the beautiful game unfold in South Africa. Now I know that for most of the American public this is a sport that lacks excitement, a game can end with no one scoring any goals; and confuses, the offside rule. FIFA’s refusal to allow instant playback is seen as archaic and nonsensical. But if you grow up anywhere outside the USA, this is the only sport that counts.

Growing up in a public housing project just outside of Glasgow, Scotland in the 80’s there were only two ways I knew of how to escape the economic depression of Thatcher’s Britain: 1. Be a professional football (soccer) player or 2. Be a rock star. I thought I was duty bound to follow in my father’s football footsteps. But two significant factors stood in my way and explain why I am now an artist and not lacing up boots for my home team, Glasgow Celtic. Number one, I was a terrible footballer and number two, the world of 1980’s Scotland precluded any chance of a girl ever being taken seriously in what was, and still remains today, a male dominated sport. Watching my son fall in love with football these past months I have been thinking about how my own childhood dreams of playing professionally were dismissed. I look at my son and wonder at his sense of entitlement about his place in the world of sport. And then I found myself in Houston, Texas.

While in Texas, I decided to visit the museum of the most lauded women in Americas sports history, Babe Didrikson Zaharias. Likely you have never heard of her. Babe Didrikson Zaharias was and remains to this day the most accomplished American athlete (male or female) of the last century yet The extraordinary achievements of this women are housed in a one room building the size of a small post office, in Beaumont Texas, the town where she grew up. Babe transcended gender expectations in a time when their rigidity was enforced even by ones undergarments. Although Babe never let such constraints stand in the way of hitting a great golf ball, “I just loosen my girdle and let ‘er fly!”(1). The story goes that in the early 1930s, an unsuspecting New York newspaper reporter approached Mildred Ella “Babe” Didrikson, at this time she was, at nineteen, nationally known as a championship basketball player and double gold and silver medalist in track and field at the 1932 Los Angeles Olympics. The reporter said, “I’m told you also swim, shoot, ride, row, box, and play tennis, golf, basketball, football, polo and billiards. Is there anything at all you don’t play?” “Yeah,” the East Texan replied, “dolls” (2). 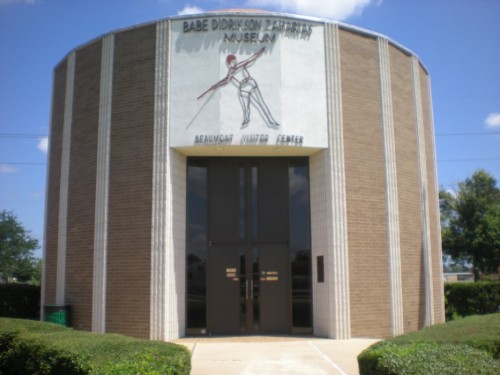 Born Mildred Didrikson, Babe happily told sports writers that she was given the nickname Babe as in ‘Babe Ruth’ after hitting five home runs in one game as a child. This kind of bravado and media savvy would characterize her interactions with the press throughout her career,  at first to her benefit then to her detriment as it was deemed unseemly for a women to speak in such a self aggrandizing manner. Before Mohammad Ali ever announced, “I am the greatest” Babe beat him to it and with good reason. After retiring from track and field after her triumphant gold medal wins Babe took up golf. She was the first female player to compete in a PGA Tour event. Babe then went on to win an amazing 17 consecutive amateur tournaments over a two-year period stretching from 1946-1947 and co-founded the LPGA in an attempt to make earn a living form her sport as so many of her male contemporaries were able to. In 1954 at the Women’s Open Babe set a record of 12 shots as the biggest victory margin in the history of the tournament. This record remains unbroken to this day.

As her career progressed the tomboyish-ness of her appearance which had been tolerated in her youth was regarded as evidence of lesbianism. The press that had reveled in her bawdy bravado now warned mothers to keep their daughters in check lest they grew up to ‘be like Babe’. Zaharias refashioned herself. This process included the performance of a marriage and all manner of domestic chores. She stressed in interviews that it was her husband that managed all the money she won, what with her not knowing anything about business, being a women and all. This  image was maintained up until her death, even though for the last six years of her life her long time companion and “other mate” Betty Dodd lived with Babe and her husband. They were constant travel companions on the LPGA tour and while the relationship was never admittedly lesbian, like so many athletes today, coming out was not an option. It was only after Babe’s death that Dodd in interviews would express her love unreservedly. 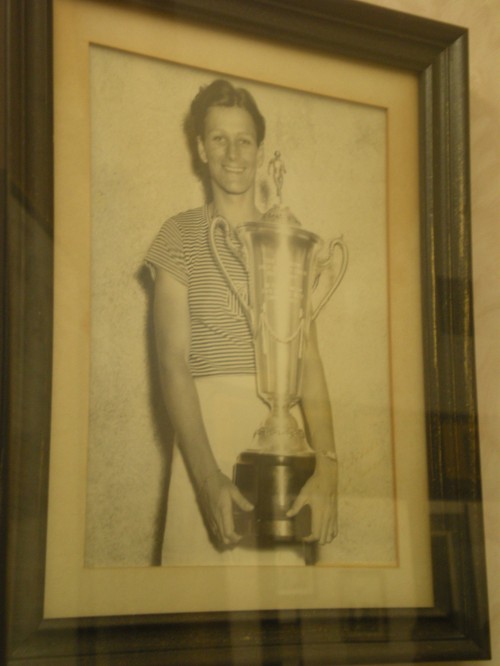 It would be lovely to conclude this post by talking about how much things have changed for women since the time of Babe and in many important ways they have. Billy Jean and Martina came out and survived, sort of. They got little or no endorsements, but they still got to play. With the passing of Title IX girls and women now have funding and support for their ambitions in the sporting world, through college. I would love to tell you that the homophobia surrounding female sports stars looking too butch has evaporated with the successes of women like Venus and Serena Williams, but unfortunately we only have to look at the scandalous treatment of Caster Semenya, the exceptional female athlete from South Africa, that occurred just last year to see that it is alive and well. She was instructed to undergo a humiliating gender test after blowing her opponents out of the water in the 800m meters at the world athletic championship in Berlin. And upon receiving the results an official was reported as saying that, “It seems she is a women but not 100 percent”.

Leaving Houston to fly back to my dear and queer friends here in San Francisco, I began to wonder about this intersection between the performance of gender and the performance of the sports star. It seems that one of the reasons we are attracted to exceptional sporting stars is that they are anomalies, freaks of nature. Most bodies walking around in this world will never be able to run as fast as Semenya or play golf as well as Babe and this makes them more than human. Which, when demonstrated by the male body we applaud. Athletes give us something to aspire to. But there is something about the way bodies are gendered that makes exceptional women like Babe and Semenya threatening and suspect rather than inspirational. The bodies of the incredible football ( soccer) players that graced our screens over the summer are spoken about using superlatives like, “poetry in motion” and are even considered a worthy subject matter for conceptual art as in “Zidane – 21st century portrait” by Douglas Gordon and Philippe Parreno.

And while I delight in these bodies playing football ( soccer), a sport that I love, I have to wonder why women like Semanya and Babe are not a suitable screen for us to project our aspirations on to. Is it their bodies refusal to submit to the gender binary ? A refusal that resulted in Semenya’s suspension from competition and Babe’s achievements being relegated to a tiny one-room building by the freeway. Or is it that by embodying attributes that we generally celebrate in men they force us to call in to question our assumptions about bodies and their capabilities in general? And that is just too disquieting for the heterogeneous order of the sporting world.