This is pt. 2 of my meditation on a theme drawn from Elliot Lavine’s typically-inspired grab-bag film series NOT NECESSARILY NOIR, currently in progress at the Roxie Theater (Click on highlighted film titles for trailers. Click here for pt.1):

Schrader was back in six months, and immediately engaged by furious bouts of automatic transmission via typewriter. Script upon script poured out, some of them within a matter of weeks or days. The first sold was written with his brother; The Yakuza, drawing on Leonard’s experience of Japan, auctioned for $325,000, then a record for a spec screenplay. Brian De Palma became very enamored of the Taxi Driver script, but couldn’t

find financing, so they moved on to an unofficial remake of Vertigo–a film admired by both enormously–eventually titled Obsession. In their plotting, they employed the cinéphile-cinéaste’s incestuous methodology of intertwining elements from other sources: a key theme from Ozu, a brilliant kidnap ransom-delivery device from Kurosawa’s masterpiece, High and Low. The project enabled De Palma to go gaga with his already patented elaborations of Hitchcockian stylistics. Schrader had other interests: at some point, he’d discovered Dante in a big way, and become fascinated by his Beatrice, obsessed by the idea of obsessional love. It was “an idealized version of… the shining goal… the redemptive moment or, in sexual terms, (in) the form of Beatrice, the female equivalent of Christ”. If hell was the pin-prick, Beatrice was heaven, only now something of a pin-prick herself, due to her inaccessiblity — women worth getting obsessed over seemed unavailable to this self-confessed formerly schlubby kid from the Midwest. “They’re like a union”, says Taxi Driver‘s Travis Bickle. Then, too, Schrader had long lost his faith, and had come to the adult realization that his form of ideation produced projections no actual person could live up to — like so many dreams involving sex, there was always something askew.

De Palma’s Obsession (1976) considerably altered Schrader’s script, and the Young Turk disowned it, as he did another project he’d been originally slated to direct: Rolling Thunder (1977), a Walking Tall-esque reworking of Taxi Driver. Despite these disavowals, the films made from his scripts were (and are) of enormous interest; Schrader was feeling the full force of his authorial talents, but none of their presumed concomitant powers — he yearned for control of his work, a hunger only exacerbated by the stunning realization of Taxi Driver when it finally fell into the firm, equally talented hands of Martin Scorsese and Robert DeNiro. It is possible that to this day (with the exception of Bernard Hermann) 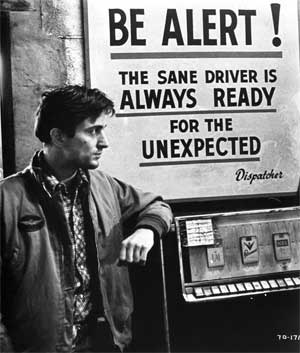 the film represents the finest work of anybody associated with it. On set, Schrader watched as “the value of the script (was) multiplied twice over — once by Marty, once by Bobby. DeNiro’s contribution was much of the schizophrenic quality of the character, which (wasn’t) in the script. That quality in Travis of shooting the guy and then saying, ‘Oh, I don’t know what to do about this gun’—all those schizo elements come straight from his personality. The character I wrote was going crazy in a more linear fashion than the (one) Bobby acted; his characterization zigs and zags.” Martin Scorsese’s hallucinatory Manhattan-as-Inferno was the perfect theater for Schrader’s mysteriously haunted Underground Man (whom the writer described as “me without any brains”) to engage in pastiches of courtly romance: the self-hating Schrader/Travis pursues a potential Princess/Beatrice (in the form of a zaftig Cybill Shepherd) only to rub her nose in the filth of his profane inner world when she gives him a chance. Filled with existential rage, Travis turns psychotic latter-day Don Quixote, tilting his .44 at father-figure politicians and pimps. Failing to despatch one Evil King, he turns a child- 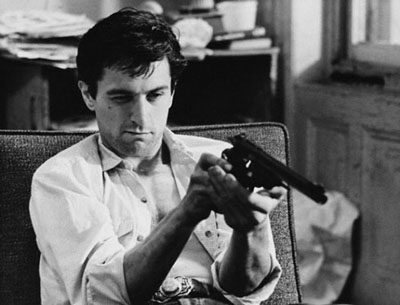 prostitute (Jodie Foster) into his reluctant Dulcinea, making an assault on the castle/whorehouse of her imprisoning Evil Wizard/procurer, Harvey Keitel’s “Sport”. The results are still — 35 years later — the most shocking chamber-play blood-bath in cinema history. It should be no surprise that to the product of an abusive family, Taxi Driver‘s climax was practically orgasmic: “The ending… is in no way horrifying to me”, said Schrader at the time the film came out. “It’s rich. It rolls out so right and so naturally, like the ending of The Wild Bunch.” Following this release were compounding shivers of irony: at the end of the slaughter, Travis hasn’t bullets left to carry out his planned suicide, and instead lives to become a media hero. Seeing the realization of this absurd and baroque universe become the surprise runaway box-office hit of ’76 must have been mind-blowing to a group who’d taken minimum salaries in order to see their art-film produced, and especially to Schrader, who had endless fantasies of blowing “that shit out of (his) head” unspooling in his brain, and who judged American society from the fixed emotional spectrum of the adamantine Dutch Calvinist morality he’d imbibed in the crib. The dreams of one who saw his central theme as “the need to transform one’s surroundings, to recreate the world” seemed about to come true. 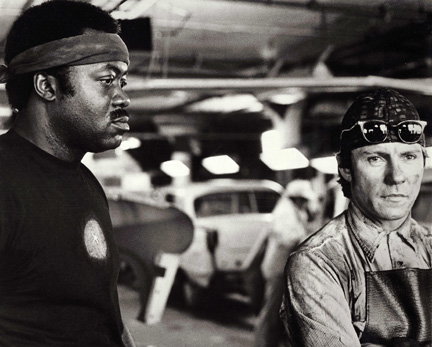 Blue Collar (1978), Schrader’s directorial debut, and one of the key undersung movies of the 70’s, burst the still-young filmmaker’s bubble right quick. Probably the most emotionally engaging work of Marxian analysis of the American commercial cinema, Blue Collar is the tale of three close friends — two black (Richard Pryor and Yaphet Kotto) and one white (Harvey Keitel) — who work together on a Detroit auto-assembly line. Underpaid and in debt, alienated as much by their underperforming union as the bossmen, they hatch a scheme to rob a barely-guarded safe in their union’s office. The film cranks up to a Jack Nitzsche-scored blues number performed by Captain Beefheart over beautiful, hyper-realist shots moving up and down the assembly-line, capturing the weight, sweat, and heat of working-class working life in action. From its beginnings, the film operates with a deceptively formulaic-seeming emotional gravitas akin to one of those animal traps which poor beasts don’t at first take seriously, but only walk away from minus a limb. “I wanted to write a movie about some guys who rip off their union because it seemed like such a self-hating act… (to) attack the organization that’s supposed to help them… In their minds, and in the minds of a lot of people in this country, the union, the company, and the government are synonymous… (but with) different logos… Everyone’s trying to outmaneuver his fellow worker, and the easiest way to create tension in the work force is through race, because everyone has this big button called racism mounted on their chest, so… you just reach over and push (that) button, and people start fighting amongst themselves.” 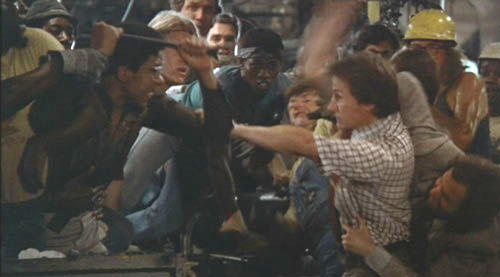 How someone negotiates the novel situation of directing a movie for the first time — metaphorically equivalent to the process of being birthed, then immediately setting out to lose one’s virginity — says a lot about the mettle of the aspiring artist: “As a first time-time director, I knew I wasn’t going to teach anybody how to act, and I knew I wasn’t going to get a big star. So I went to three actors, each of whom was pushing for his career, and each of whom was not independently bankable. Then I took all three of these bantam roosters, dropped them into the same pit, and made sure that nobody got out first.” It was a clever gambit, generating palpable on-screen tension (with—for my money—Yaphet Kotto stealing the show), but it nearly derailed Schrader’s directing ambitions: “I said afterwards if this is what movie-making was like, I didn’t want to do it anymore. I quickly learned to confine myself to talent management — not a day went by without some sort of confrontation. Right after you said ‘Cut’, a fight would start. After about three weeks in, I was in the middle of the set and all of a sudden I started crying and… couldn’t stop.” His assistant director walked Schrader around the block and brought him back. “Richard looked at me and said, ‘You pussy — are you gonna be a man or not on this movie?'” Schrader was getting a taste of his own medicine — though exploring his observations since childhood of the dynamics of power (and hence, implicitly dealing with his own familial issues), this brilliant thinker was barely above the dark material in which he dealt. He manipulated and exploited others ruthlessly — often with minimal motivation or justification — including his elder brother Leonard, with whom he sometimes wrote scripts (including Blue Collar), but who was always served the short end of the stick. Perhaps Schrader had subconsciously absorbed their father’s contempt for his brother. At any rate, Schrader’s refusal to be number two to anybody was strangely enmeshed with his working-class sympathies: “Even though (I’d been) a middle-class kid, the fact that (we’d) lived in a poor part of town gave me the sense that rich people aren’t going to give you anything, you’re going to have to take it.”

It hadn’t been for nothing Schrader had had the Cybill Shepherd character in Taxi Driver ascribing to Travis, his analogue, characteristics from Kris Kristofferson’s “The Pilgrim, Chapter 33”: “He’s a prophet, he’s a pusher… partly truth, partly fiction… a walking contradiction”. Schrader’s next two directorial efforts would drive the point home hard.

Click here for pt.3 of Hardcore: Paul Schrader in the 70’s.