For the Next Two Weeks @The Roxie: Elliot Lavine’s Box of Cracker Jack Noir Oddities

I Still Wake Up Dreaming, the third in the Roxie Theater’s bi-annual Festival of Poverty Row Noir, culled from 35mm Studio Restorations and 16mm collector’s prints, plays May 14th thru May 27th, starting this Friday—that is, Tomorrow! 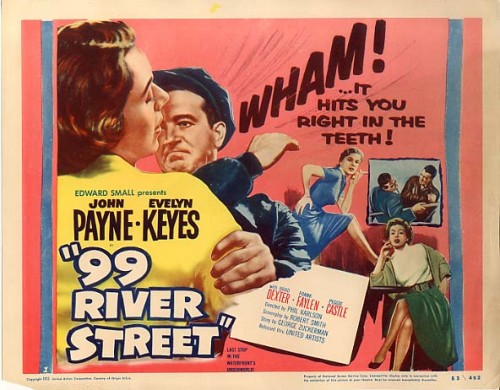 Pssst… Hey, kid… You heard about the Noir Festival? Oh, yeah, sure, everybody’s heard about that Noir Festival. Comes every January, creepin’ in like clockwork, like fog in the Sunset, or the town letch trying to slip through your teenage sugar cookie’s window. Of course, in its way, it’s great. We’ve all had our eyes on takin’ a tumble with Rita Hayworth, but after you’ve hit the big score, don’t you wake in the morning with an emptiness, a yearning for something a tad more down home, like those blonde-outta-the-bottle floozies pretending to be waitresses you useta gawp at while slurpin’ chocolate sodas at the lunch-counter of your small-town five-and-dime? You know what I mean… 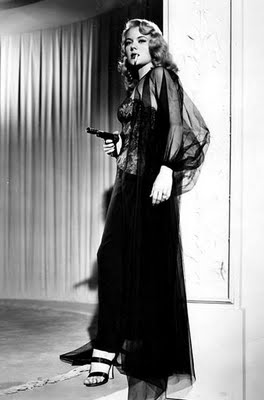 Well, kid, you’re in luck. You see, for the past year, Mr. Elliot Lavine, former programming wizard of the Roxie Cinema, has been returning with his bag of tricks on a once every six months basis for two-week Noir blow-outs at his former digs. As San Francisco’s oldest and quaintest cinema (we’re talkin’ ONE HUNDRED AND ONE candles on this sheet cake), the Roxie is the perfect grotto for a fourteen-night cheap hooch bender. No, none of that fancy-pants big studio shinola for Mr. Lavine. He only goes for the Poverty Row, down-n’-dirty stuff, the celluloid equivalents to the comic-books hidden under your bed, the ones tossed-out by your mother once you’d graduated to long-pants. You know the ones I mean — the ones full of horror tales, and dangerous dames with their black-satin shellacked scenic curves… I can tell by the glint in your eye you still have the hunger, son. Well, follow me…

First, let’s discuss the pictures I know about — the great, undersung Phil Karlson’s 99 River Street, say, which plays this Saturday (5/15). Now there’s a doozy. One-time prize-fight contender turned cab-jockey John Payne, over the course of a few late-night Gotham hours, finds himself suddenly forced into a Pirandellian netherworld in which he’s pulled, pushed and prodded by gunsels and jewel fences, fly-by-night theatrical producers and sweet-acting but hungry would-be stage strumpets, not to mention the duplicitous dish with whom he shares a marriage certificate. Will, as in the best of Luigi, reality be meshed with fantasy to produce transcendent results? I ain’t sayin’, but I’ll leave you with a telling tit-bit: one-time song-and-dance man Payne is aptly named — his mitts are lethal. If you haven’t seen this, it’s a must. I’ll be attending for my fourth shot at the title… 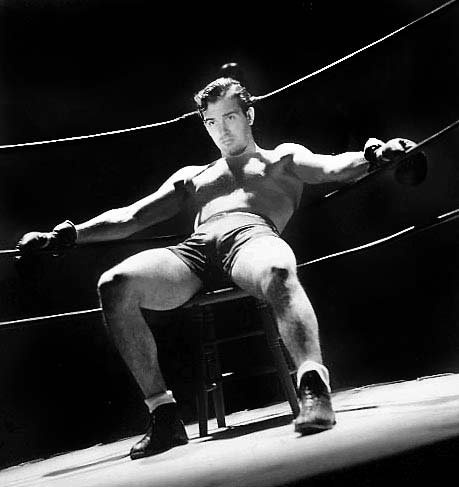 You know those dreams in which you’re overtaken by uncontrollable waves of anger and violence and you kill the nearest fall-guy? I have them all the time… Well, anyways, what if you were to wake up afterwards and find yourself covered with all the tell-tale signs that that poor fellow was really doing his best to evade your blade? This is the set-up for Maxwell Shane’s aptly-titled Nightmare (5/16). It doesn’t help dolorous jazz-man Kevin McCarthy that the dream had been set in a multi-plane mirrored room, and scored to an eerie jazz number — the obsessed session man can’t get these out of his fevered, haunted brain. Is somebody playing him for a chump? With the aid of hypnosis, perhaps? Detective (and all-time capital “G” Great) Edward G. Robinson steps in to sort out this conundrum. Nightmare is a strangely gorgeous, and gorgeously strange, hyper-intense vision of a picture, ably aided in the atmosphere dept. by location shooting in vintage New Orleans circa ’56. This was a prime period for Kevin McCathy’s male-hysteric routine — ’56 also saw the release of his most famous showcase, Invasion of the Body Snatchers.

Another down-in-the-bayou spectacular is Andre De Toth’s Dark Waters (5/22). This is one of them lady-in-distress pictures, with Merle Oberon as your haunted heroine suffering from memories of being in an ocean-liner taken out by a torpedo when she was a kid. She retires to a family estate in the Louisiana swampside, only to realize somebody very close to her is trying to drive her CRAZY. How do these dames always manage to land themselves in the quicksand? Beats me, but this kinda set-up is always good for some kicks… Surrounded by such stand-up gents as Franchot Tone, Elisha Cook, and the ever-sweet Thomas Mitchell, you know all that muck will come out in the wash—or will it? Then there’s Jacques Tourneur’s The Fearmakers (5/23), in which we learn that Washington, D.C. PR firms back in the day were little nests for commies by which to disseminate their propaganda. I always knew somethin’ fishy was goin’ on with those D.C. types… Some have described The Fearmakers as not Tourneur’s best, but this is like calling a painting “one of them lesser Vermeers” — see what I mean?

I think you can tell I been around the block a few times, kid? Well the whole secret of this latest version of Mr. Lavine’s enterprise is that it’s based around a whole slew of pictures nobody’s ever seen, like “Rat-pack Noir” Johnny Cool, or Cop Hater (the two of which play as a double feature 5/24), about guess what? A psycho with a gun who hates cops! (Eat your hearts out, NWA…) The savory-sounding pulpy center of this artichoke is six outta the legendary eight-film-long Whistler series, in which Richard Dix plays variations on a sap who always seems to find himself on different strands on that Black Widow’s web known as the American Nightmare. Fortunately, he’s always helped outta the jams by this philosopher/poet proto-Beatnik-type, who lurks in the shadows, and is said to make very nice with a chest-full of air and a pucker — a feller they call The Whistler…

You can see, kid, this Festival is one of them grab-bags fulla dug outta the cracks delights and surprises, kinda like a box of Cracker Jack. The experience of these twenty-eight pictures over the course of two weeks will be like diving into those sweet, dark molasses-covered, crunchy kernels of popcorn, and salty peanuts, only this is a box chock-full of tough breaks, pistol-jockeys, and skirts. Every box has a prize at the bottom. Will your prize be a set of brass knuckles to the kisser, or the Big Brass Ring? Each diver’s gotta take his chances, and embrace his fate. See that ladder to the high-diving board over there? Would I guide you into an empty box? You know me by now… Would I steer you wrong, kid?