This Month: CINEMA SHOWDOWN! Chris Marker vs. Duras, Modesty Blaise stands up David Holzman for a Blind Date + The Joys of Filmmaking 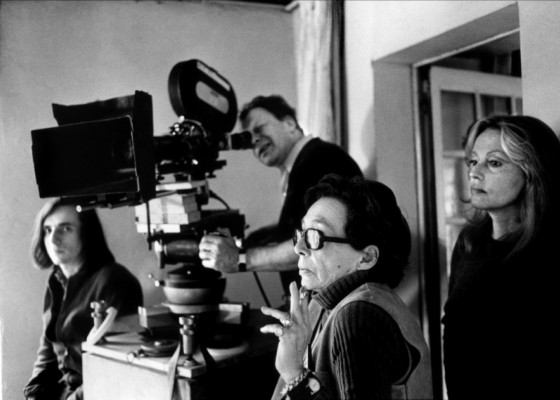 Ye Gods! Once again, the Evil Masterminds who seek to drive we poor Franco-cinéphiles (esp. of the 60’s and 70’s loving variety) TOTALLY CRAZY are up yet again to their predictable schemes… Yes, I speak of tonight, Thursday, April 1st’s cross-programmed shows: @SFMOMA: Chris Marker’s incredibly rare Le joli mai, and @Yerba Buena Center for the Arts: Marguerite Duras’s not quite as rare, but still fantastically exciting India Song. Don’t know what to say here, folks: 14 or so years ago, I greeted the Pacific Film Archive’s announcement of a fairly hefty Duras retro with a fit of pique: why weren’t they doing the maestro (and one-time Duras collaborator) for whom I really had a hankering, Alain Resnais? My response was to attend only two of their seven-or-so screenings. Well, that’ll certainly show them, I thought with satisfaction, only to be haunted by this decision in the months to come. The two I had seen, Nathalie Granger (1972) and India Song (1975), had been reasonably brilliant. Surely those others might have been just as great? I’d been put off by what I took to be the pretension of her writing in book-form (but surely I could have trusted M. Resnais in this matter? After all, he’d hired her to write Hiroshima, mon amour), and philistine, perhaps, that I am, I still haven’t yet had the epiphany to reverse this opinion, but the memory of those two dream-like, semi-absurdist, quasi-Stucturalist works has served as a regular reminder of just what an ass I can be… The mini-retro at Yerba several years back made me feel almost up to speed, and now we have this: India Song (starring Delphine Seyrig, whom I seem to be eternally discussing in these pages) is the first of a 2nd mini at Yerba, featuring four key films on successive Thursdays in April, the others being: Destroy, She Said (4/8), Le camion (aka The Truck, 4/15, which notoriously features Duras and her one-time discovery Gérard Depardieu sitting at her kitchen table, trading off reading lines from an unshot feature script, alternating with shots from French country roads featuring—maybe you guessed it?—a truck), and finally, Nathalie Granger (4/22, again with Depardieu, and also Jeanne Moreau). There’d normally be no question that India Song is where’d I’d be tonight, but Steve Anker and Irina Leimbacher, the cruel guest curators responsible for SFMOMA’s show, have delivered THE trump card: yes, Marker’s oh, so joli mai. Marker is a legendarily spectral figure, and even those ardent American cinephiles who’ve kept a vigilant eye open for screenings of his films have probably, like myself, only seen a few. Each time I watch Godard’s Pierrot le fou (if I’m not mistaken), I’m reminded of the BIG one I haven’t by the insistent chant at some point on the soundtrack: “le joli mai, le joli mai, le joli mai….” Oh, GOD (of) ART, you torturer, you mocking marker of Markers unseen… Le joli mai is said to be a Jean Rouch-esque finger-on-the-pulse of Summer ’62 Paris which features French youth, smug bureaucrats, supercilious cats, and many worker-on-the-streets cameos, especially by film directors (those hardest working of all workers), including Rouch, Resnais, and the young Jean-Luc (Godard). Don’t know more than this, but for further, more informed discussion on this film, check out these extremely current posts by Max Goldberg here and here. Info about SFMOMA’s screening can be found here. 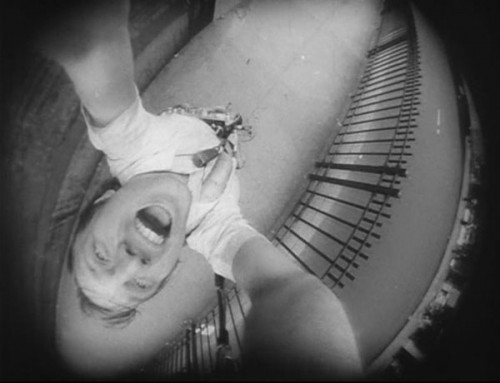 “LOOK AT THIS LENS!!” David Holzman tries out his new fish-eye. Note Nagra III strapped to his side.

Yerba is a cool customer in its Young Gun guise. Having planned to knock off the SFMOMA/San Francisco Cinematheque collaborative screening of Le joli mai Thurs night, they then team up the very next night with Cinematheque to take aim at PFA! Could this be the ultimate and final Death Match? As part of its retrospective Joseph Losey: Pictures of Provocation, PFA presents the double feature of Blind Date (no, not Blake Edwards’ from 1987, but Losey’s very different outing from ’59) and (especially exciting) Modesty Blaise, the terrific Euro High Camp comic-strip send-up starring Monica Vitti, hot-cool chick fave Terence Stamp, and Losey regular Dirk Bogarde, from that banner year 1966! This would be my very first viewing of it in all the glory of its full 35 millimeters, BUT —- Young Gun Yerba and Cinematheque the Kid have chosen to make this the very evening they bring in Stanton Kaye and Jim McBride LIVE, in person, for screenings (in their original 16mm formats) of Kaye’s Georg and McBride’s David Holzman’s Diary. THIS is my must-see show Fri evening. I haven’t seen Georg, or anything else by Kaye, but having heard only the best reports, I’ll leave it to you to decide whether my informants can be trusted… Jim McBride, and his David Holzman’s Diary, on the other hand, I’m VERY familiar with — in fact, those who know me well, know this film to be one of the key influences on my life. Holzman was shot in the Manhattan of ’67, and purports to be a first-person documentary by a young man who’s gotten hold of an Eclair NPR and a Nagra III (probably the same set-up to shoot Le joli mai), who then proceeds to stalk TRUTH in the Big Apple’s mean streets or the confines of his apartment by shooting footage of his life. Brilliantly played by L.M. Kit Carson, David Holzman and his Diary are key artifacts of that ecstatic period when people discovered the joys of cinema could be realized not only by the passive body/active mind in the dark paradigm, but now also via the new active mind/active body in the light combo, in which cameras and projectors could, for a relatively small investment be made part of one’s life, and LIFE COULD BE CINEMA all the time, 100%… I first saw David and his Diary in my room via a borrowed 16mm print in Carson’s home state of Texas, in a house which was later semi-immortalized in Richard Linklater’s Slacker. Yes, this film is part of my life. Have I gone so far as to film my naked girlfriend as she lies in bed, while cooing to myself re. how perfect this physical reality is at that moment in time as viewed through my camera lens? I’m not telling, but when I turn to my right, the Nagra III on my editing table comes joyfully into view…  [UPDATE:  Kaye and McBride will be joined at this show by a SPECIAL SURPRISE GUEST:  None other than David Holzman himself, Mr. L.M. Kit Carson(!!)  Now’s the time for Diary aficionados to trundle out their many questions re. this closet masterwork — I plan on coming up with a few myself!]

The following night, Sat, April 3rd, McBride and Kaye return to Yerba/Cinematheque for screenings of Jim’s My Girlfriend’s Wedding (+ his short “My Son’s Wedding to My Sister-in-Law”) and Stanton’s Brandy in the Wilderness. Not having seen these, I’ll just note they all sound quite exciting, and, OF COURSE — painfully play vs. the first screening in PFA’s semi-retro of films and videos by Alain Cavalier, Le combat dans l’îsle. Haven’t seen this either, but it sounds magnificent. My only knowledge of Cavalier comes from a video screening many years ago of his nun/saint pic Thérèse (shot in 16m?), which seemed at least a demi-masterpiece. I look forward to the real deal on Friday the 16th.

Let me close by exhorting all and sundry to attend every possible Joseph Losey film screening at the PFA you can! The remaining titles are largely of the highest order — King and Country, Boom! (John Waters doesn’t know what he’s talking about — this is an all but completely successful work of INTENTIONAL High Camp, and, similar to its predecessor Modesty Blaise, is also quite serious at its core), M. Klein, and that Great American Noir masterpiece, The Prowler (which plays with the rare short “A Gun in His Hand”). Whether or not Losey was a Stalinist (he was), a weekend with these movies would be MY kind of re-education Camp! The High kind… (No, this is NOT a request for superfluous snickering at these screenings! Play it Straight. I do…) 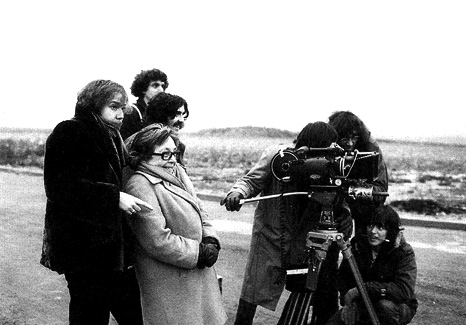 Why is this woman smiling? And does she ever look down at her typewriter like this? Marguerite Duras directs Le camion.