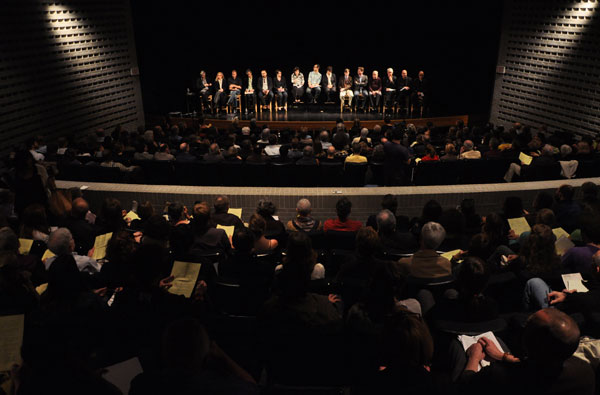 Is Photography Over? A full house again for the Friday afternoon session. Photo: Charles Villyard

This week SFMOMA hosted a major symposium on the current state of the field of photography, with two intensive panel discussions Thursday evening and Friday afternoon. Yesterday’s reports are here. The initial texts from the symposium participants are here. Other blog posts addressing the question “Is Photography Over?” can be found here.

If the first session of “Is Photography Over?” was structured to highlight differences among panelists and between panels, the wide-open format of the second session served a different function. In three hours of free-wheeling and wide-ranging conversation—passionate, energetic, but also punctuated by dropped questions and dead ends—what became most apparent, and most interesting, were the gaps and asynchronies between the panelists and their audience. We sensed general agreement on all sides that broad shifts in contemporary culture provide the occasion for reconsidering museum practices—the need for museums to function as “sites for conversation” and not merely as repositories for objects, as Charlotte Cotton and Doug Nickel agreed. The twist, perhaps, was that new imaging practices and forms of distribution were hardly the only topics of conversation.

In their closed-door session on Friday morning, we learned, the panelists had settled on four issues of major concern for their ongoing discussion (all oriented toward photography’s present and future, for those looking for a final verdict). Dominic Willsdon suggested three of these as the topics for public discussion: the transition to digital technologies and distribution; the mutating belief systems and modes of perception we bring (or will bring) to photographic images as digital technologies become ubiquitous; and the lingering sense that “photographers” and “artists using photography” remain two distinct camps, generationally and conceptually. Willsdon then acknowledged the group’s fourth key topic, the role and politics of “institutions” vis-à-vis photography, but also shared the group’s concern that such “shop talk” was inappropriate for a general audience.

It was fascinating, as a result, to watch the audience continually force that issue back into view. Institutional practices and policies were part of what this audience came to discuss, and in concrete terms: in relation to economics and the market, or the physical experience of objects within the future of the museum. There was a general sense that this fourth topic, the question of institutional choices, bears directly on how we understand the shifting connections among the other three. If the general idea of “sites of conversation” has become a key model, here’s a working hypothesis for the next experiment: the particular site matters.

Institutional issues sparked some intriguing and productive musing on museums’ future roles. Will digital photography force a sea change in the “experience of objects” to which museums have long been dedicated? Conversely, will the haptic and social qualities of digital imaging force a change in our notion of photography as the optical art par excellence? How will displays that seek to present a “history of photography” (like MoMA’s galleries) be inflected by the medium’s extraordinary diversification? Will museums—and all the rest of us—learn to explore an “aesthetics of uncertainty” in and for photography, contra the literalism and certitude we’ve long associated with the medium?

But institutional topics also served as vehicles for frustration about the transitions taking place. A number of inquiries and complaints concerned the relationships between art market economics and the imperatives of contemporary museum collecting and display: what combination of forces drives a market for huge, spectacular, expensive photographs that seem to repudiate photography’s (putative) earlier function as historical witness? Another significant thread of audience comments revealed resentment about the ever-growing critical apparatus that seeks to situate photography within contemporary art: an apparatus, it was alleged, that “artists-using-photography” respond to and benefit from in producing arcane or self-indulgent conceptual work, and from which traditional “photographers” who document the “what the world looks like” are now marginalized. For their part, the panelists were provoked more than once into unified repudiation of laments for photography’s ethical and credible past, pointing out that such convictions about the medium and its functions had always relied more on myth than reality.

Looking forward, the clear flashpoints and missed opportunities within the conversation are probably of equal significance. George Baker, for example, continued to ask us to linger on some crucial questions: What will we miss when chemical photography has no purchase on our culture anymore? What life experiences did it intersect with? Can nostalgia be a critical vehicle for grasping what photography has been, culturally and artistically? The confrontation between these questions and the attachments, investments and beliefs voiced by the audience was tantalizing, promising. But in this multivocal format—quite effective in other respects—we could only catch a glimpse of other potential conversations to follow.

This is all to the good. This experiment in public/private discussion provided a useful and provocative complement to other recent cross-sections through the objects, practices and disciplines surrounding “photography.” It’s an admirable beginning, full of lessons for future attempts, and it confirmed that the questions under discussion were the right ones. Above all, thanks are due to those at the museum for their foresight, organization, and effort, and to the participants for their generosity—and endurance. And since a print-on-demand publication is expected to follow, we can’t even say that “Is Photography Over?” is truly over.

After two hours of closed-door discussions Friday morning, the symposium’s thirteen participants—looking slightly enervated perhaps from the rigor of their deliberations—filed onto the stage of the Wattis Theater and sat in a single row.

SFMOMA’s Dominic Willsdon, one of the moderators, began the afternoon’s plenary session by summarizing the primary motifs that seemed to keep coming up in that morning’s debate. This was followed by over two hours of an open forum that included incisive comments and questions and from audience members.

Like the increasingly complex and expanding definition of photography—upon which the panelists were not ultimately able to agree—the public forum was so intriguing and wide-ranging and that for now I will only be able to provide a small window into the Friday’s proceedings. (Please check back for additional posts in the days to come.)

One of the motifs that came into play, that surprisingly was not as prevalent in the short position papers the panelists submitted in advance of the event, was the rise of digital technology in photographic practice.

Peter Galassi noted that while the prevalence of chemical photography is on its way out, what hasn’t changed is the fact that a photograph is still made by fixing an image from inside the camera. The rise of digital photography, he argued, ensures photography’s future.

Philip-Lorca diCorcia, however, proposed that digital processes have in fact had a profound effect on contemporary practice. Many photographers, who are increasingly having labs produce their prints, end up spending more time correcting the files that digital photography gives them. Walead Beshty agreed, lamenting the fact that as photographers interact less and less with the physical materials of photography, they are depriving themselves of discovering what those materials might be capable of beyond verisimilitude to, or an enhancement of, analogue photography. How long will it take, he wondered, for artists to develop and explore the unique attributes of digital materials and tools so that digital photographs (which an audience member later predicted would no longer be qualified as “digital” in a few decades’ time) will have a look of its own, distinct from the way photographs have looked until now?

In the end, the two-day symposium made possible a rare and generous exchange between a group of articulate and distinguished panelists that is not likely to be assembled again anytime soon. Even if the only consensus reached was the fact that photography is changing, and will continue to change, the debate over the role of institutions, the challenges facing photographers, and what exactly has been lost revealed in fairly clear outline the major issues facing institutions, photographers, and our perception of the photographs they make.

Sarah Miller is the 2010-2013 Terra Postdoctoral Scholar in American Art at the University of Chicago. She is writing a book about the multiple and diverse inventions of the concept “documentary” in American modernist photography.

Brendan Fay is an Andrew W. Mellon Postdoctoral Fellow in the Humanities in the Department of Art and Art History at Stanford University, currently working on a book on photography and abstraction c.1950.

Joshua Chuang is the Assistant Curator of Photographs at the Yale University Art Gallery. Most recently, he organized the exhibition First Doubt: Optical Confusion in Modern Photography and has edited monographs on the work of Judith Joy Ross and Mark Ruwedel. He is currently at work on a traveling retrospective exhibition and related series of publications devoted to the work of Robert Adams.

Thanks to all for attending, reading, listening, participating. As Brendan & Sarah noted above, a print-on-demand publication is indeed forthcoming.