Stephanie Pau on Dispatches From The Archives

Stephanie Pau, SFMOMA manager of interpretation, sifted through many hundreds of paper bits and pieces to put together a mini-retrospective of the museum’s paper-trail history since 1935, on view now in our visitor education center. 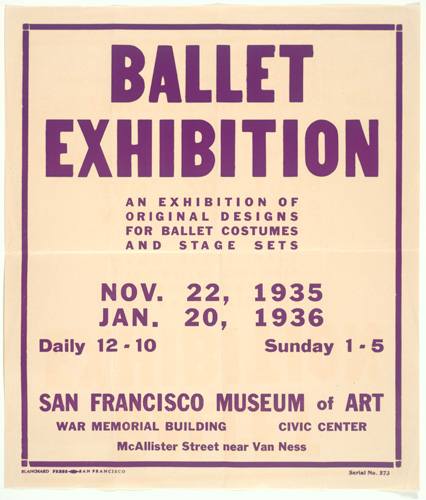 A few weeks ago, a new exhibition opened at the Koret Visitor Education Center, located on the second floor of the museum. It’s called Dispatches from the Archives, and I’ve organized it as part of the 75th anniversary suite of exhibitions. Dispatches is as much a reflection on as it is a celebration of SFMOMA’s rich and varied history, from its opening on Van Ness in 1935 to the present, and highlights some of the treasures that have been unearthed, catalogued, and processed since a Getty Foundation grant enabled the museum to establish an official SFMOMA Archives. For several hours each week from April through July, I met with archivist Peggy Tran-Le down in the SFMOMA Library. She patiently brought me box after box of ephemera from the past eight decades of the museum’s printed history—exhibition posters, mailings, publications, and design objects.

These weekly forays into the archives reminded me of my past life as an archaeologist, hours sifting through evidence left by those who came before me, and I was all the while cognizant of the fact that history makes itself every day—certainly at an institution as busy as this one. It was mind-boggling to think of how much stuff we create, and the myriad stories revealed (and yet so obscured) by each individual piece of ephemera I came across. There were so many things I wanted to include, but alas, our Education Center has only so much space on its walls. So I cut off the checklist at seventy-five objects from the museum’s history.

I chose to include things not just for their aesthetic qualities but for the stories they told—of the artists, projects, and innovative programs SFMOMA has hosted from its inception. And what a variety of things I came across—from stunning poster designs by Arnold Fujita, Barbara Stauffacher, Martin Venezky, and other Bay Area graphic designers (including the unsung heroes of our in-house design team); to the whimsical (artist-designed belt buckle for a 1975 Artists’ Soap Box Derby); to the bizarre but tasty (chocolate bars designed by Tibor Kalman for his 1999 retrospective).

Anyone who visits the exhibition may notice a gap between the end of the 1970s to the early 1990s. That’s because the archives is a work in progress. Materials have been thoroughly processed through the end of the 1970s, more selectively so from the 1980s to present. In fact, much of the materials from the past two decades came to my attention through the generosity of long-time staff members, the “unofficial archivists” for their own departments, who opened their flat files, department records, and yes, even personal workspaces to my investigations. I’ll never forget the day our Public Relations Manager, Libby Garrison, excitedly offered up a bottle of champagne, frisbee, and a crumpled windbreaker from the museum’s pre-1995 groundbreaking ceremony. Alas, these gems did not make it into the exhibit, but I did turn them over to Peggy! 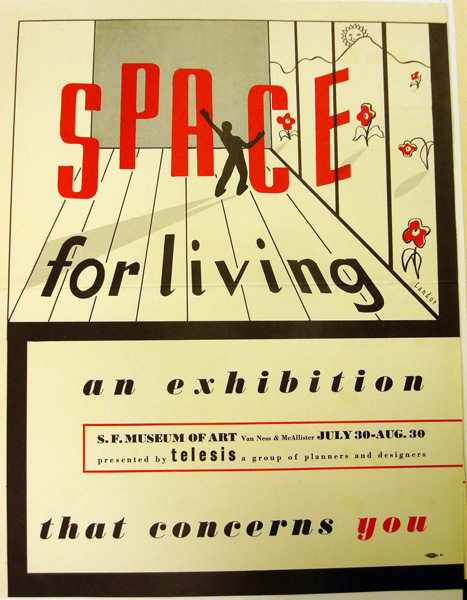 Space for Living: An Exhibition of Planning and Architecture, 1940; exhibition poster; designed by Walter Landor

Amidst the profusion of individual stories, a larger tale emerged. We often think of museums as impersonal monoliths, but all that I saw pointed to the contrary. What distilled for me was the story of a museum shaped by the individuals within its walls—staff, curators, artists, and visitors. Poring through decade after decade of material, I noticed a gradual morphing of spirit and programmatic vision as one generation stepped aside for the next. I was especially interested in the way this held true for our museum directors, beginning with awe-inspiring founding director Grace McCann Morley, for whom I developed a serious “Mind Crush”. Morley’s near-missionary zeal for exhibiting, collecting, and educating the public about the art of her time propelled her to organize a dizzying array of exhibitions and program—and this is well-reflected in the archives! In the first three years of her tenure, what was then called the San Francisco Museum of Art launched 70-80 exhibitions per year —a number since unmatched, and now nearly impossible under current standards of museological practice.

In the early decades Morley’s exhibits ranged from the genteel (Original Costume and Stage Designs for the Ballet, 1935) (see poster at top), to the daring. And sometimes they had a direct affect on the shifting cultural and physical landscape of the city. For example, when the1940 exhibition Space for Living: An Exhibition of Planning and Architecture (the poster for which is currently on view in Dispatches), San Francisco was one of the last major American cities without a dedicated city planning department. A society of architects, landscape designers and local thinkers aimed to change that. They called themselves Telesis, and beginning in 1938 they congregated in North Beach studios and cafes, discussing ways to more “intelligently plan” the rapidly changing urban landscape. Morley who was among their regular circle, invited them to present their utopian ideals in an exhibition: it was the museum’s first architecture exhibition, and thousands attended. In 1942, the city finally established a planning department, with Telesis members among its staff. Printed materials in the exhibition all point towards dynamic moments like this in the museum’s history.

Most of Dispatches is comprised of printed materials, posters, and ephemera produced by and for the museum, however there are two exciting adjunct projects I also want to describe.

The first is a video I collaborated on with Suzanne Stein, which builds on the work of the SFMOMA Oral History Project team. Since 2005, the Oral History Project has been collaborating with the Bancroft Library to record a series of interviews with those who have helped shape the museum’s history from the inside—artists, past and present staff, trustees, and our volunteer docents.

Rather than cull exclusively from these oral histories, Suzanne and I wanted to also pursue the perspectives of people whose voices are less often found in official records. We approached five people local to the Bay Area—a writer/artist, a musician, a theater director, two of our members, and one of our security guards, and asked them to talk about an artist, artwork, or exhibition. We wanted to highlight the relationship between an individual and the artworks or artists they feel strongly about. 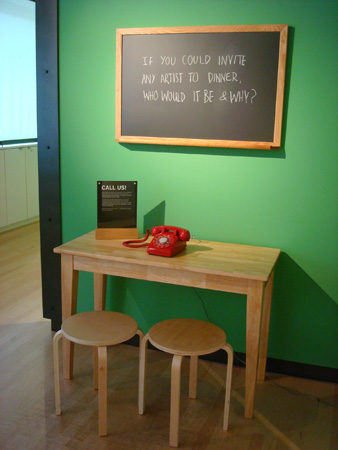 In the Phone Booth Project, an old rotary phone becomes a way for visitors to share some stories of their own.

Finally, there’s a fun “feedback”-centered project: it includes a chalkboard, a question, a desk, question, , and an old red rotary phone that taps into the museum’s existing voicemail system, in effect becoming a voice recorder.[ The invitation is to visitors to pick up the receiver and relate a personal story of a past exhibition, an artwork, or answer any other questions I can come up with.

Before I close, I have to say that Dispatches could not have happened if not for the dedicated team of archivists and librarians – Barbara Rominski, Peggy Tran-Le, and archivist alumnae Dayna Holz and Jessica Lemieux– who painstakingly sifted through, catalogued, and then developed finding aids for the boxes of materials that had been languishing in storage– not so much forgotten as it was obscured by its own abundance.