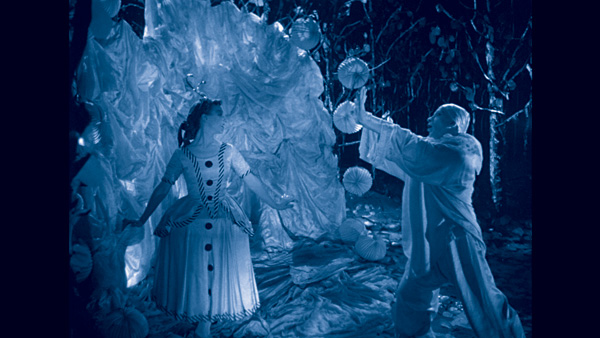 Pity the artist who works in celluloid. If compelled towards story-telling and the budgets typically commensurate with such, one must first bed down with tycoons and their retainers, then run a gauntlet of various ideological hit-squads in order to promulgate the work. Film has a diabolic power which sits uneasily on the collective psyche of this increasingly conceptual/rationally oriented era, and efforts to shuck off celluloid for once and all are on-going. (There has been, for example, a recent attempt to kick movies out of museums.) Artists in film who forgo the props of narrative realism fare little better. Photographic prints are accepted as art, but film prints accrue a little wear and tear every time they’re run through a projector, decreasing their collectibility—one of the reasons they’ve never caught on in the art world.

Artists in collectible mediums who have had the cultural impact of Kenneth Anger usually wind up rich as Croesus. For the better and/or worse of us all, this Magus of the Medium has had other concerns. After, in his youth, becoming an adept of Aleister Crowley—the 20th C’s most famed practitioner of the Magickal Arts—Anger embarked on the lifelong project of The Magick Lantern Cycle, a scheme of literal cinematic sorcery performed as occult rituals, and experienced, consciously or not, as spells of enchantment by audiences, who find themselves in thrall to his viral psychic attack. Films such as Inauguration of the Pleasure Dome, Scorpio Rising, and Invocation of My Demon Brother further the Crowleyian agenda to redress the imbalance built into the fiber of our Judeo-Christian/Manichaean culture. Demonized pagan gods are restored to their pantheons, and 20th C. pop icons are celebrated as their contemporary incarnations. A current of overt sadomasochist homosexual phallic-worship ripples through Anger’s work, leaping out into the brains of his viewers like an electrickal charge. Masculine vigor and aesthetic beauty are reveled in, violence and aggression celebrated. In short, Anger’s films conjure up the whole gamut of anti-social forces. To one enmired in the spiritual blindness of Western man, this work comes off as EVIL, no doubt about it. Anger employs the panoply of malefic archetypes as the fisherman makes with his rod and lures, enticing the innocent into an unconscious reevaluation of values and identity. Like students of Crowley, Anger’s viewers are lead to the realization that GOOD and EVIL are not stratified, fenced-off realms, and that human psychic reality operates on a chromatic scale better represented (if only in symbolic form) by Pagan Pantheons than Moses and Monotheism and all their attendant madness. 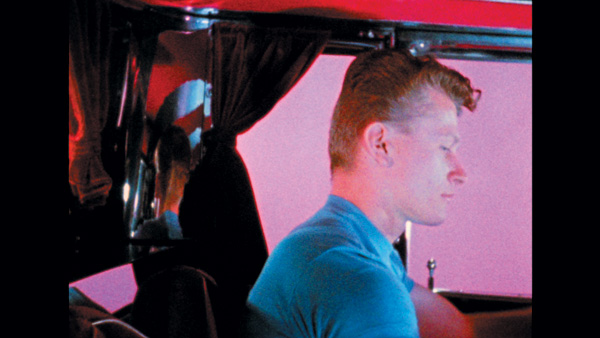 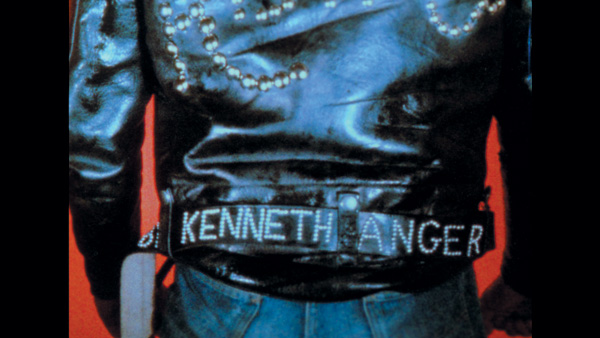 My first encounter with Anger’s cinema occurred in a small but crowded Austin, Tx. theater in 1985. A featured work in a show of experimental films emblazoned with the eye-catching title Sex and Blasphemy in the Avant-Garde, Scorpio Rising swiftly proved itself an intoxicating tonic to the college-age post-punk scenesters of various stripes who surrounded me. This was something we’d been looking for. Scorpio‘s sorcerer’s brew of black leather and cocaine, reefer and parodies of Jesus, erections and motorcycles, sexually aggressive movie stars and early 60’s pop and rock hits—not to mention swastikas and skulls—as revealed in a sometimes-frenzied orgy of light and color, hit someplace deep, connecting us to earlier eras and previous generations of decadence and rebellion. The swirl of conflicting responses, of both confusion and pleasure, was palpable. When, a few months later, I was able to see Invocation of My Demon Brother several times, it became clear I’d been caught on Anger’s hook. This eerie and beguiling melange of multiple incarnations of Lucifer (such as Bobby Beausoleil, Mick Jagger, and Anton LaVey), set loose amongst a roiling vortex of exuberant ritual magick as collectively practiced in the Haight-Ashbury circa ’67, is photographed and edited by someone obviously possessed by a daemon of Satanic majesty. Without a doubt, Anger was one of the GREAT creators in cinema. The ensuing years revealed him to have had a far greater influence on contemporary culture than I could have possibly known: His use of pop songs passed through Scorsese’s Mean Streets and Goodfellas, and the George Lucas of American Graffiti, to become the personal world of every ipod user dancing away in his or her own private movie. Can there be any question that the release in 1947 of the sadomasochist, homoerotic Fireworks (made by Anger at sweet seventeen!) caused the floodgates to be opened to the Beat, Hippie, and Punk movements, not to mention the sexual revolution and Gay Liberation? After all the chaos he has willed into being, it seems likely the 21st will be known as the Century of ANGER.

This shapeshifting alchemist works in mysterious ways, but whenever his spirit is invoked, the tenebrous Self will be confronted, and the muck stirred… Ten or so years ago, I’d come to a critical juncture in my analysis at the C. G. Jung Institute of San Francisco. My therapist had delicately guided me to the point at which I’d have to come to terms with my dark side. Kenneth Anger was much discussed. From the perspective of my Marxian matrix, he was indeed a disturbing spectre. Didn’t my evident intoxication by the art and persona of one so clearly consumed by EVIL mean I was EVIL, too? My therapist seemed unfazed, but I reasoned this was due to her not having seen Scorpio or Invocation of My Demon Brother. How could she understand the reality with which we were dealing?

Demon Brother was much on my mind as for some years (and to this day) I’d lived in a house half a block away from the Westerfield House, famous to locals as the “Russian Embassy”, in which Anger had lived in the late 60’s. Much of Demon Brother had been photographed there, including shots of Bobby Beausoleil as Lucifer, shortly before he left for southern climes to murder Gary Hinman under the aegis of his new guru, Charles Manson. It was rumored that Beausoleil’s association with Anger had somehow set him off on his downward spiral… I could see the Westerfield House throughout the day from my desk window. The whole matter weighed heavily on my frame. It was a psychological Rubik’s cube from which there could be no deliverance.

One day, having some time to kill before work, I popped on the TV to a random public station which was playing a documentary on Busby Berkeley. Ah, I thought, as a student of cinema, it was high time for attention to be paid to this reputed master about whom I knew so little. After being regaled with several examples of his brilliantly geometric and gloriously plastic dance sequences, I was presented with one of his fans being interviewed at his grave, a fan who generously explained how Mr. Berkeley was just too much of an artist to be understood or tolerated in Hollywood. What a sweet and gentle soul, I thought. How nice that the maestros still had their loyal partisans… And then the words “KENNETH ANGER” flashed on the screen right under this “sweet and gentle” man. Tidal waves of cognitive dissonance trampled my skull like elephants. The cosmos retreated, shrinking to the size of an atom, before exploding in yet another Big Bang, and then realigning itself in a bizarre, unfamiliar scheme, solar and planetary systems askew in the heavens… This was MR. EVIL??!!! By the time I set off for work, I realized I’d been victim and beneficiary of yet another of Anger’s spells… This beguiling wizard had served as a figure on which to project the secret Self who held me in thrall and terror. It was a Self which could no longer be repressed, and must be invoked for his turn to cavort in the light… As I passed the sun-dappled “Russian Embassy”, I brushed my hand against its wood siding, the first instance of what would become a repeated ritual. I couldn’t wait to tell my therapist—maybe more of the magick would rub off on me…