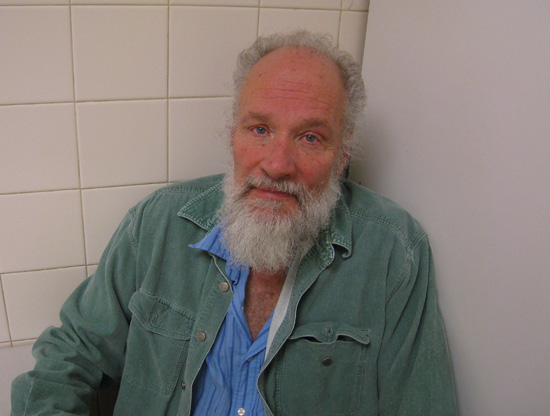 Mike Kuchar, in the SFMOMA “offices”

After the Kuchar Bros. screening last Thursday evening (George and Mike Kuchar, Recent Preservations: Pussy on a Hot Tin Roof, Tootsies in Autumn, A Woman Distressed, and Lovers of Eternity) I trapped Mike Kuchar in the back of the catering kitchen, near the walk-in freezer, and conducted this tiny interview with him as part of the ongoing series “5 Questions.” His brother George had recently been asked the same 5 questions for the blog, but Mike’s answers were different. This controlled experiment revealed that twins don’t always think alike. Mike and George had very different answers to almost all of the questions. However, there was one question in particular they answered the same, and I think that their mother would be proud to know that neither Mike nor George would ever steal a great work of art…or anything for that matter. Finding out that the kings of depraved camp were such moral upstarts made me feel slightly warm inside.

Beautiful books. Art books. I find it relaxing and inspiring to look at pictures in beautifully bound books, especially religious art because it strives for the holy. A divine image. Spectacular murals in the Vatican and some of the modern, more tacky religious art, in that it’s very naïve and beautifully corny, but it means well. It’s very kitsch. But it is earnest and it tries to be meaningful and beautiful and somehow it falters, but the idea that an attempt was made is very endearing. I appreciate all of these expressions of trying to depict the divine. Some of these works will turn out to be very surreal. Which is another interesting element—but all in trying to depict the divine.

If you could invite any artist to dinner who would it be and why?

I like Neo-Classical art and the Pre-Raphaelites…so I would say Frederick Leighton. I love his paintings; they are evocative and beautifully crafted. I once met Wallace Wood, a comic book artist who did science fiction comics in the 1950’s and whose artwork I found very riveting. His visions of the future: spaceships, men, women and machinery. He had his own style that always captivated and horrified me. And I did meet him and I told him how his work had so affected me, in such a great way and he was a very delightful man who was taken aback that I would gush like that. I was with some intellectuals who would never dare do that.

If you could steal any artwork in the world to hang up in your house what would it be?

What’s your favorite tool and why?

The movie camera. Something that takes sharp pictures.