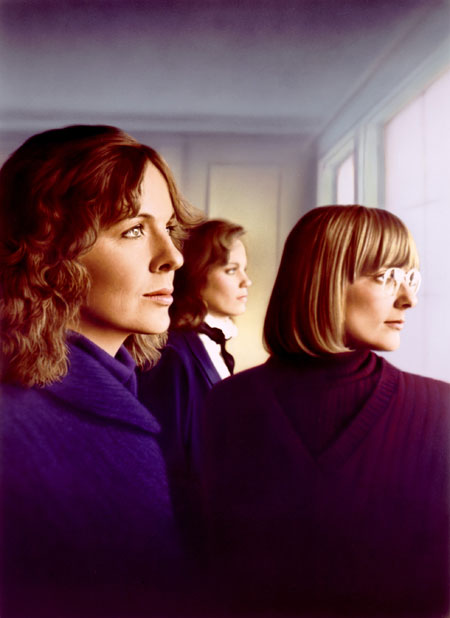 It’s been many years since I’ve called myself a Woody Allen fan. By the early 80s—when I began my hardcore cinephiliac tour of duty—the critical darling of the late 70s had begun churning out such lighter and slighter fare that I was tempted to write him off entirely. By the time he’d entered a run of serious mid-career revitalization with such major works as Hannah and Her Sisters, Crimes and Misdemeanors, and Husbands and Wives, I routinely appraised his works sight-unseen with the assured jaundiced eye so characteristic of the post-adolescent. Unfortunately, the ensuing years have provided scant cause to knock me off my high horse, and now even Allen’s supposedly great works of the 70s have, for me, deflated to bagatelles, their former importance seemingly an effect of mass-hallucination. Yes, there’s much charm in Annie Hall, say, but the movie’s largely strung together by the most brazen ziggurat of intellectual referencing and name-dropping ever erected. I gotta admit I took mental notes watching these films which informed my reading and aesthetic explorations for quite a while, but now, almost at the end of the 00’s—the most nonintellectual era yet known to modern man—they can be seen for what they are: products of a largely anti-visual sensibility with a talent rooted in a brilliant display of absurdist verbal pyrotechnics better suited to the satirical mock-essay. “Look how much I know, how much I’ve read!“, they seem to scream. “Nebbish jokester that I am, I still must be taken seriously! I’m not just a funnyman! I’ve read Proust, Kafka, Freud, and Flaubert, my favorite director is Jean Renoir, and how ’bout that Sol LeWitt!” Etc, etc.

The financial success of this approach is a testament to the social basis of comedy—surely there weren’t hoards of graduate students making these films hits. Those who got the references laughed to inform everybody they were in the know, and those who didn’t laughed to disguise their ignorance. All this semi/pseudo-erudition set to laughter made audiences happy to plunk down the cash, but also for unfortunate aesthetic results. Love and Death applied the formula strictly to 19th Century Russian literature (plus a healthy dollop of Seventh Seal references thrown in for good measure), while the much-lauded Manhattan combined Annie Hall with coffee table photography book to produce one of the oddest amalgams in cinema history: it’s both a gorgeous orgy of widescreen black-and-white cinematography informed by a deep knowledge of still photography art, and an astoundingly non-visual dramatic romantic-comedy: while it’s true that much of its emotional palette is expressed by images, most of its dramaturgical and comedic highlights can be gleaned solely by listening to its soundtrack. 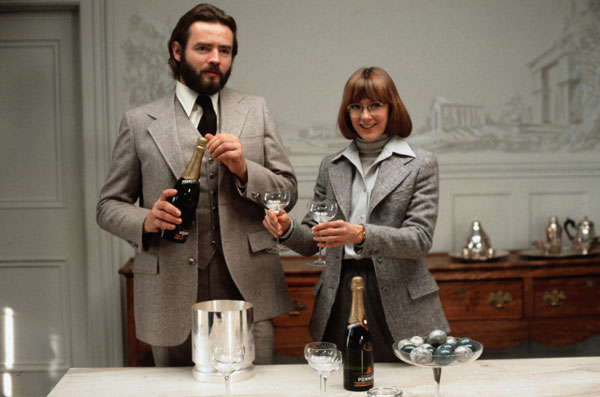 The gods overfilled Woody’s cup-o’-talent, however, and there are exceptions to the rule—works which find their home squarely within the Temple of True Cinema. Sleeper is one such film. Blending slapstick—a genre ever-threatening to petit-bourgeois inclinations towards decorum and social stability, and hence looked down upon by newspaper critics – with science-fiction and romantic comedy, and laden with references more topical than arch-intellectual, Allen evokes in Sleeper something close to the anarchic spirit of his beloved Marx Brothers. Brimming with visual inventiveness—whether in terms of its jaunty art direction, physical comedy, or the certain but unfussy manner in which Allen creates shots and puts them together—Sleeper is cinematically alive. 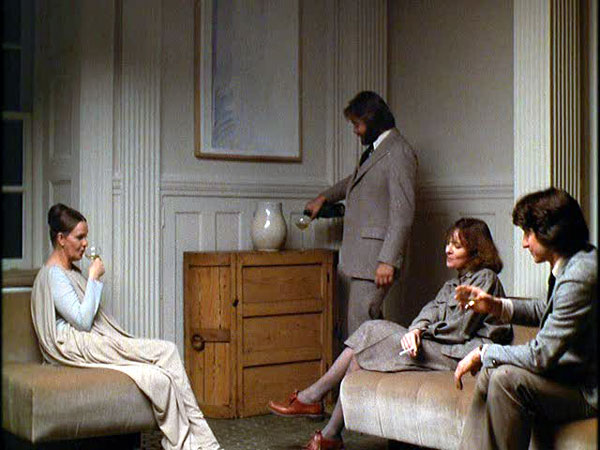 Interiors is another exception, albeit of a variant variety. Allen’s first “serious” film—I’m talkin’ DEADLY—and his first in which he didn’t appear as an actor, Interiors was greeted with collective shock by audiences and critics. Studio executives no doubt had the same response when they first got a gander at the script. To this day, no Hollywood studio has ever financed anything as remotely austere—funereal, in fact—at least by an American director. But what could the bigwigs do? Allen’s films didn’t cost that much, and he’d just won a mitt-full of Oscars for Annie Hall. Many critics pronounced it a masterpiece, while others scratched their heads. Audiences quickly got the word, and skipped it. Over the last thirty-one years, collective amnesia has taken hold, and it’s almost as if Interiors never existed. Stunningly photographed by the legendary Gordon Willis (The Godfather films, and all of Woody Allen’s from 1977 through 1985), Interiors plunges Allen’s audience into an alien universe signaled by the virtual absence of music—only two of Allen’s signature classic Dixieland jazz numbers find their way into the film—and relatively late, at that. The aliens are a family of doom-laden wealthy WASPs who rotate around a mother, Eve, possessed of a black hole-esque gravitational pull. Eve has had a brilliant career as an interior decorator for several decades, but at some point things snapped, and the severity of her minimalist vision seeped into every nook and cranny of her family’s psychic life. A period of institutionalization complete with shock therapy was followed by a return to the family’s center, and her bumpy ride ever since has left the whole clan emotional wrecks. Towards the beginning of the film, the father’s decided to take a powder, and it’s hard not to sympathize—his three daughters have spent their whole lives in a world of trying to make sense of it all, and he doesn’t have much time left. The middle daughter, Flyn (Kristin Griffith) has found anxious success as an actress in “terrible” TV movies. The youngest, Joey (Mary Beth Hurt), flits from job to job, art to art, in an attempt to capture her mother’s power. The eldest, Renata (Diane Keaton), is the only one of the three to reach artistic expression—as a poet—at a level equivalent to her mother’s, but she’s coming apart at the seams: “My impotence set in a year ago,” she tells her therapist, “…my paralysis. I suddenly found I couldn’t bring myself to write anymore… Increasing thoughts about death just seemed to come over me.” These lines, which Allen would previously have delivered himself, played for comedy, are spoken here in dead earnest. Just as it would appear impossible for things to get worse, father returns with a new fiancee, and all hell breaks loose… 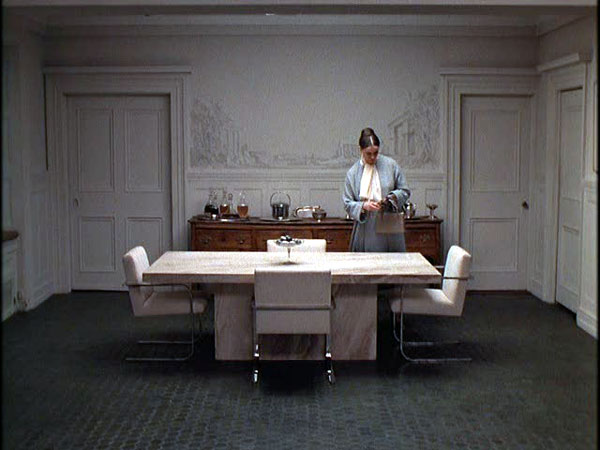 Since its release, Interiors has been described as being in the manner of Allen’s idol, Ingmar Bergman. While this is true on the face of it, Allen has interiorised many of Bergman’s own influences: Chekhov, Ibsen, and Strindberg, and has added a couple of his own—Eugene O’Neil  and Tennessee Williams. All this haute-powered theater culture background might make Interiors a little pretentious, but I’m not one to say. My own childhood experience of 70’s Manhattan white-walled minimalism and memories of a few matriarchal figures in my own family, which, if combined, would, I’m certain, prove a dead-ringer to Eve, render my response to this film too viscerally personal for me to lay down some pat judgment. I believe, however, compared to other Allen films of this period, Interiors’ script is stillborn. Every situation, every line is so damn on-the-money. Like the world it portrays, this script is airless. So how can I be clearly on the road to rating the film made from it highly?  Modern American film is based on the tyranny of the script. Most film productions (including most of Allen’s) attempt to resuscitate the inspiration that went into their writing, then freeze-dry the results on celluloid. Allen’s filmmaking in Interiors, however, is highly disciplined, yet organic. His camera is precise, but he allows performances to come alive and take shape before it. If I’d space and time I could write a page or two on the superlative performances which populate this film, not least by its men—Richard Jordan, and a fairly young Sam Watterston as two of the sisters’ husbands, and E.G. Marshall, in his most sensitive screen performance as the father, Arthur. Geraldine Page, often cited as the major stage actress of her generation, delivers a portrayal as Eve as subtle, complex, and mysteriously involving as any I’ve ever encountered, but astonishingly, when Arthur returns with her replacement, Pearl, Maureen Stapleton’s appearance in this role immediately evokes a life force so vital that it’s instantly clear Eve’s match has been met. Similar to his treatment of his performers, Allen allows decor, land and sea-scape to become palpably alive in front of his camera. His use of symbols and human and natural archetypes—such as the sea—will be uncomfortably obvious for some, but what is lost in nuance is more than made up in raw force.

The print of Interiors SFMOMA will be showing Thursday night is a studio archival print—one of the few, or possibly THE ONLY, known to exist—and procured for this screening by the intrepid and diligent efforts of Public Programs Associate Gina Basso. Those of us in attendance will likely be simultaneously horrified and enthralled—these are the sorts of responses impelled by Allen’s best film.