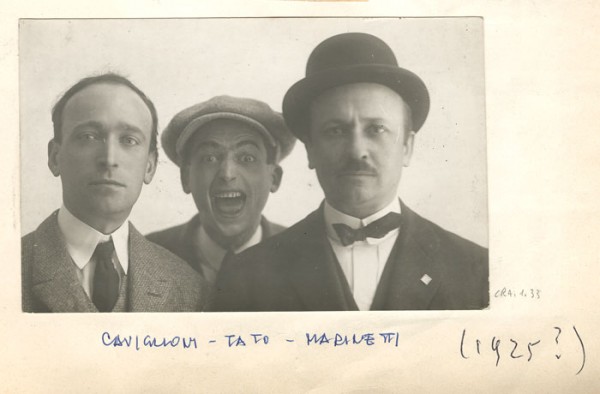 This week sees the arrival at last of the SFMOMA LiveArt/Performa 09 collaboration, METAL+MACHINE+MANIFESTO. Events started Wednesday evening with a symposium at the Italian Cultural Institute and continue through the weekend here at SFMOMA and elsewhere. Open Space has already seen some significant discussion of the project a few weeks back. Here, a Q/A round-robin between art historian, critic, curator and Performa founder RoseLee Goldberg; literary critic Marjorie Perloff; and our curator of public programs Frank Smigiel. RoseLee began with a question to each of the others:

I couldn’t agree more with Marinetti’s comment, “Down with women fainting all over the place!” —but I also couldn’t agree less with his insistence on “scorn for women.” Was his scorn in fact for fragile “fainting women” or was he plainly misogynist? Is it possible to re-think the idea of the Futurist woman, or to offer a revisionist history in this regard?

Marinetti’s scorn was not for “woman” as such but for the whole business of Romantic love—the pretense that sex didn’t exist but that the beloved woman was an object of worship, still in the tradition of courtly love. The best thing to read regarding RoseLee’s question is Marinetti’s hilarious essay “Down with the Tango and Parsifal,” subtitled “A circular Letter to some cosmopolitan women friends who give tea-dances and who Parsifalize themselves.” Here Marinetti spoofs the Tango, then the popular new dance:

“Monotony of seductive, swaying hips, between the flashing eyes and Spanish daggers of de Musset, Hugo, and Gautier. . . . The last manic yearnings of a sentimental, decadent, paralyzing Romanticism for the cardboard cut-out femme fatale.”

And he added, “Down with the tango and its cadenced swoons. Are you really convinced there’s a lot of pleasure to be had, gazing into each other’s mouths and ecstatically examining each other’s teeth, like a pair of hallucinating dentists?” There follows a comic link between the Tango and Wagnerian opera with such great love scenes as that between Tristan and Isolde. Throughout, the emphasis is on sublimated sex as something false and dishonest.

Far from having scorn for woman, Marinetti felt women deserved better than such sentimental posturing. He was not at all a misogynist. But it is true that, so far as art cenacles were concerned, Marinetti’s group was entirely—and aggressively—masculinist. Women played a very peripheral role although his second wife, Benedetta Cappa Marinetti, was a fine artist in her own right and the two worked closely together: see Lucia Re’s biography of 1998. In assessing the sexism of the Italian Futurists, bear in mind that the Dada artists of the Cabaret Voltaire were not very different—again, an almost all-male group, bonding with one another. To find a different treatment of gender, one must look at Russian Futurism where women played a major role.

We’re thrilled that you were in New York for Performa 05 and Performa 07, and that we now have a kindred spirit in San Francisco who is as excited as we are about performance in the 21st century. One of the major reasons I started Performa in New York was to re-ignite a 1970s ethos of artists from different disciplines coming together. Do you see the possibility for re-igniting a community in San Francisco, of the kind that we associate with City Lights and the radical literary scene there in the 1960s?

As someone with a relatively modest tenure in the Bay Area so far, I wouldn’t put myself in a position—at least not yet—to gauge the recent history, current temperature, and larger perception of the arts communities here. I will note that a sense of belatedness often clings to conversations about cultural production, with long-standing San Franciscans telling me, simply:  “you missed it; the dot.com boom killed everything.” If City Lights itself soldiers on in North Beach, it’s easy to find agreement that the tech bubble fundamentally disrupted a local ethos of experimentation, radical politics, and signature forms of collaboration and circulation. Money changes everything, the old story goes, and luxury condos + soaring rents = an artistic mass-migration, in this case to LA, Portland, or Berlin.

For an insightful account of this felt transformation in Bay Area culture, I’d start with Rebecca Solnit’s Hollow City: The Siege of San Francisco and the Crisis of American Urbanism, which tracks this pivotal moment and highlights the way not only artists but also the heady mix of characters, classes, and cultures that mingled and made culture here were in fact under siege by the bubbling new economy. After our most recent burst bubble, I must confess that cultural life can indeed feel precarious, threatened by the Google and Genentech buses moving our neighbors south to their still-working new economies but never depositing them in ATA, the Brava theater, or a Thursday night film screening at SFMOMA. And the real estate bubble burst seems not to have lowered anyone’s rents (mine just went up). Ghost neighbors ever-commuting and art houses with empty seats? Now there’s a scary cultural recipe.

If there’s a palpable desire in a city like New York to recapture the energy of its economic ebb in the 1970s, a moment when decline fueled an explosion in artistic practice & possibility, I’m not sure I feel a yearning in the Bay Area to recapture a 50s Beat moment, a 60s counter-culture moment, or a 70s conceptual moment. A pre-dot.com moment, maybe, but then what would such mean and look like? I’m very excited by Jens Hoffman’s course for Joseph Del Pesco’s Pickpocket Almanack, “The Center of the Periphery,” which will examine RoseLee’s question here in greater depth. There’s also the long conversation here about the fate of New Langton Arts, and what the situation for this key San Francisco art space means for arts in the Bay Area.

In my own provisional answer about new types of energy & enthusiasm, I find myself drawn, again and again, to the means by which artists here build their own infrastructures. Neighborhood Public Radio. Center for Tactical Magic. Queens Nails Projects. Future Farmers. It seems that “community” or “audience” or “public” or even “alternative space” are something artists now build too.

With Tanya Zimbardo’s recent post in mind, examining Jim Pomeroy and the institutional v. alternative art space divide, the question for me, at SFMOMA, is how artists might use the museum too. Can we bring something to a complicated plumbing that someone else is building? A plumbing we don’t, ultimately, own? How can the museum be a platform for projects that might be bigger than it is? Or a stage for artists interested in what we contribute and not what we contain? Pomeroy’s desired “one night stand,” at last?

To RoseLee then, a question does remain for me about the model of artistic culture imagined in so many invocations of 1970s New York. For me, and for many artists I know, the era presents such a seductive story and study. Yet Marinetti would certainly not approve of our backwards glance. Would Matta-Clark? Do you? Can you say something about the key values of that era—and how those values continue to engage us? Especially against that of the Futurist example, whose rhetoric & images we might find difficult to take up, at best?

Stay tuned for response from RoseLee, who’s arriving in SF any minute.