Have SFMOMA’s gatekeepers taken leave of their senses? Inviting subversion into any institution portends a slippery slope. Filmmaker Paul Clipson, head projectionist/AV tech of the museum’s Wattis Theater, might seem an innocuous figure in which to place our trust. It is always such types who lure us to our destruction. What harm, you ask, could there be in charging this manifestly benign cinephile with curatorial powers to assemble a brief survey of mid-century European documentary shorts? It’s true these are arguably the finest flowers in this corner of cinema: Luis Buñuel’s Land without Bread is the master’s claim to fame in this realm, while Georges Franju’s Hôtel des Invalides and Alain Resnais’s Le chant du Styrène are the crowning achievements of two of the great names in French documentary of the 1950’s.  Many of us who have worked with Clipson have long suspected a lurking danger beneath his affable exterior. This trio of seditious works reveals an alien intelligence, poised, like the masked Fantômas looming over Paris, dagger elegantly clutched to his side, to strike terror in the heart of San Francisco. Hyperbole? Perhaps. But prudence would urge a proper sifting through the evidence to hand… 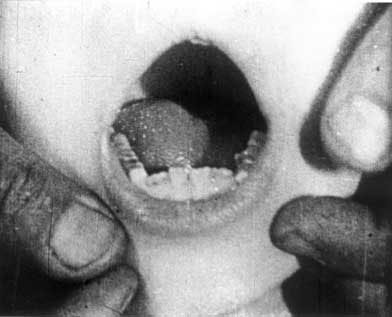 Land without Bread is last, but not least, of Buñuel’s triumvirate of early Surrealist masterpieces. The first two of this cycle, Un chien andalou and L’Âge d’or, are easily amongst the most sensational and scandalous in the history of the celluloid medium. Land without Bread, the first film Buñuel made in his native Spain, documents a mountainous region so impoverished that the folkloric tradition has been lost, the inhabitants have forgotten how to sing, children lie in the streets dying of malaria, and yes, bread and all other wheat products are unknown. These are lives in which absurdity reigns supreme. The villagers eat one of their precious goats only when it takes an accidental tumble off a cliff, while schoolchildren are taught to write at a chalkboard by means of such exhortations as “Respect the property of others.” Buñuel brings the full corrosive force of his Surrealist vision into documentary terrain, subtly lampooning the conventions of a genre then only in its nascency. Financed by anarchists, this work’s potential contribution to Spain’s on-going turmoil was recognized, and was very much not appreciated. Banned for two years by the Republican government, it earned Buñuel a warrant by the right-wing Nationalists (fortunately never served) for him to be immediately escorted to Generalissimo Franco were he to be captured. 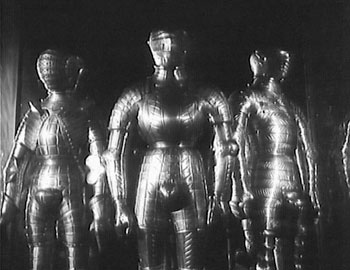 The Hôtel des Invalides is a vast complex in Paris containing a hospital and retirement home for veterans, as well as a military museum. It also serves as the resting place for many French military/political figures, including Napoleon. Before Georges Franju’s compassionate expressionist vision of a sadomasochist universe made its way to features like Eyes Without a Face, it had already found full expression in such works as this eponymously titled documentary portrait. Likely his most scathing work, Hôtel des Invalides draws all basic humanist tenets into question. Its opening shots capture a flock of birds swooping in and out of formation amongst the complex’s buildings, suggesting human militarism springs from a similar herd instinct. Menace lurks behind the most lustrous evidence of human innocence: from a close-up of a beautiful museum visitor’s summery laughter, Franju cuts to an atomic explosion’s mushroom cloud. This filmmaker’s perspective is anything but simplistic, however. A gallery of armor comes to life with the ghostly evocation of the battlefield’s fallen, a scene which includes a brief meditation on the armored suit made for a small child. At a later point, a hideously deformed veteran partakes of services in the chapel, his identity proudly, anxiously displayed on a chest swathed by a brace of gaudy medals.

Unquestionably the greatest “industrial” film ever created, Le chant du Styrène was the last short made by Alain Resnais before embarking on a career in features beginning with the immediately legendary Hiroshima, mon amour and Last Year at Marienbad. Styrène’s opening images are stunning. In abstract space, strange, unearthly flowers suddenly bloom. Brightly hued alien beings spring instantaneously to life. Never before or since have shots of such plastic beauty been devoted to the documentation of—well, plastic. Styrene demonstrates itself an astoundingly versatile material, capable of being molded into toy cars, badminton-rackets, record players, babies’ sippy cups. Urged on by a stridently declaimed mock-heroic verse narration, we are ushered through all phases of these product’s spawning, from finished consumer item back through to its source material’s origins. Counterpointed by a dissonance-inflected modernist score, Styrène presents us with a jaw-dropping, gorgeous vision of industrial/consumerist visual culture rivaled only by Red Desert and Zabriskie Point. In a contemporary world given over to unlimited valorization of consumerism, Resnais’s film may be, via its detournment of each and every item spied by its camera away from commercial purposes, the most incendiary film currently possible.

By journey’s end, it’s clear what Clipson’s up to. This program of rare European documentaries is of a piece with his own formidable aesthetic project, as revealed by his work in Super-8. From the depths of his hidden lair, this latter-day Fantômas seeks to convert audiences to a cult of orgasmic beauty, in which mind, eyes, body, and soul are united in ecstatic trance. Thoroughly subversive, Clipson is guilty as charged. He has produced a show easily amongst the most exciting of the season.