Film as a Battleground: Shirley Clarke’s Portrait of Jason

“I started out that evening with hatred, and there was part of me that was out to do him in, get back at him, kill him,” Shirley Clarke said in 1983.   In 1967, when Clarke’s documentary Portrait of Jason hit the theaters, it was undoubtedly a shock. While gay films of the exuberantly campy, fantastical variety had been bubbling up from the 16mm Underground, Jason was the first of these to “get serious”. Adopting the mantle of cinéma-vérité (truth film), and appearing in art houses blown up to 35mm, Jason confronted adventurous viewers with a wholly new cinematic experience: 100 minutes on the silver screen of a talented, tortured, yet unabashed black queen more than ready for her close-up in the one-woman show of a lifetime. The film’s proceedings have lost none of their power to enthrall and disturb. 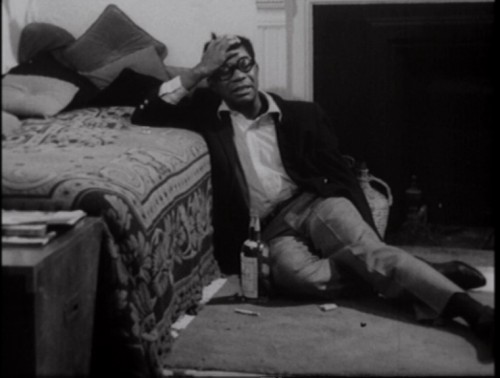 Jason Holliday has no sooner introduced himself, than he immediately drops the sketched-in veneer of glamor to announce his handle is a nom-de-plume: hidden behind this jaunty persona is the all-too-revealing birth name Aaron Payne.   Shields of swish and jive cover over the deal he’s made to worship the golden calf to distract himself from inner torment. This isn’t a difficult task for Jason Holliday, for he is one very beguiling personality. A self-described “hustler”, whose métier may or may not involve prostitution and thievery, he claims to do anything necessary to support himself with ease: “I’ll come on as a maid, or a butler, or a flunky—anything to keep from punching the clock.” His shady brand of lazy is hard to trust, however, for he’s riddled with self-repressed ambition: “What I really wanna do is what I’m doing now, (that) is: perform.” The drama of Shirley Clarke’s Portrait concerns the nature of Jason’s performance(s) and an attempt to tear off the masks behind which this “real swingin’ hip cat” hides.

Jason has been promising for years to anyone who’ll listen he’s on the verge of developing a night-club act. But it’ll be necessary to engage musicians, and so on. This’ll take money, of course, and money gets taken. Things must be done in the style to which he’s accustomed. With his observations of the bizarre antics of rich employers serving as models, Jason has built a complex inner labyrinth by which to escape forty-something years of racism and queer-hating, and from which he justifies countless attempts to get his own back. After many charming yet disquieting tales of revenge and rough trade, of confinement in the “nut-house” and “ballin’ from Maine to Mexico” (with San Francisco, of course, not left out), the viewer might be forgiven for wondering if this “male bitch” has got the goods. But from the moment he effortlessly slides into dead-on impressions of Mae West, Barbra Streisand in Funny Girl, Vivien Leigh and Butterfly McQueen in Gone with the Wind, the cast of Carmen Jones, and the aristocrat Katherine Hepburn plays in Stage Door,  it’s clear Jason’s stories and the complex pantheon of personae he assumes brilliantly serve to force into the public arena a psychodrama which for his sanity must be shown and seen. 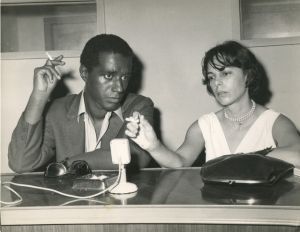 Towards the beginning of Portrait, Jason is comfortable. Lounging in Clarke’s Chelsea Hotel apartment, supplied from a bottomless well of booze, and toking from a joint the size of a small cigar, Jason is performing for friends. Aside from the three-member film crew, Jason and Clarke are joined by  black actor Carl Lee (friend of Jason’s and her long-time lover, who had appeared in her earlier landmark productions, The Connection and The Cool World and worked as her main collaborator on the latter), and another member of their circle, Robert Fiore. Jason’s ready to roll: “This is my chance to really feel myself, and say: ‘I’m the bitch’… This is a picture I can save forever…I will have one beautiful thing that’s my own.” From off-camera Lee and Clarke cue him to launch into routines familiar to them from a well-rehearsed repertoire. Jason responds ebulliently, punctuating his tales with “finger-poppin’ ” and the ironic refrain “I’ll never tell.” As the remnants of the twelve-hour shoot roll on, however, it becomes evident his interlocutors very much mean for him to tell, prodding him to reveal the sordid details of his upbringing by a muscle-bound gambler, his bootlegger father, Brother Tuff. None of this goading pierces Jason’s armor until things get personal, when in film’s last minutes Lee unloads a series of hateful accusations, causing tears to stream down Jason’s face.

I haven’t as yet been able to discover the source of Clarke’s professed hatred of her subject; and indeed, while editing the film,  she “grew to love” him. Perhaps it was Jason’s open lust for her partner of the previous half-dozen years, or an irritation natural for a filmmaker craving male privilege at Jason’s casual misogyny (which in turn betrays an envy of female power), or collective fatigue for Jason’s incessant jive amongst their set. At any rate, the “love” is easy to get—Clarke had a strong affinity for outsiders. “I always felt alone and on the outside of the culture I was in… I identified with black people because I couldn’t deal with the woman question and I transposed it.” The product of a wealthy Jewish family, she married after college to escape the yoke of an abusive father. After a serious foray into the world of modern dance, Clarke switched over to film, to which she brought a dancer and choreographer’s rhythm, dynamism, and self-conscious orientation to performance. Subsequent to becoming a major figure in the American experimental film movement with such films as the brilliant (and fantastically beautiful) Bridges-Go-Round, Clarke, under the influence of Rossellini, became fascinated with issues of “truth” and “reality” as related to cinema. The three feature films she made in the 60’s openly sparred with the tenets of the simultaneously-developing cinéma-vérité movement, especially her friend Ricky Leacock’s contention that truth in front of the camera could only be recorded, never created.

Portrait of Jason was Clarke’s major contribution to the cinéma-vérité canon. Given the Promethean nature of this artist, a wholly new conceptualization of the form was to be expected—by forcing the audience to negotiate the self-conscious insertion of the behind-the-camera reality into cinéma-vérité, Clarke injected drama into the form, bringing it closer to originator Jean Rouch‘s concept: “the truth of cinema, not the cinema of truth.” Doing this aligned documentary to Sam Fuller’s famous dictum “a film is like a battleground. There’s love…hate…action…violence…death. In one word: emotions.” The results were very much of a piece with the nature of filmgoing in the 60’s, for the cinema was arguably THE place people congregated in search of catharsis in those most tumultuous times. Portrait of Jason (like Warhol’s Chelsea Girls of the previous year, whose “beauty and power” Clarke claimed to be “haunted by”) is a key artifact of the 60’s psycho-dynamics of stardom-lust, self-exposure and ego-breakdown which have come down to us in the devolved versions of Jerry Springer, reality TV, and American Idol. “People love to see you suffer”, Jason delightedly observes early in his Portrait. Even though Clarke regularly defocuses Jason’s image to remind the viewer of her camera’s mediation, his infectious personality in all its dimensions dominates her film. Though Shirley Clarke was often designated the “Queen of the Chelsea”, on that winter night in ’67 Jason shared her throne, and does so again every time her portrait of him hits the silver screen.

Portrait of Jason screens this Thursday (7pm) and Saturday (3pm) in the Wattis theater, as part of the Richard Avedon: Notes on “Nothing Personal” film series.