One on One: Dominic Willsdon on Jasper Johns 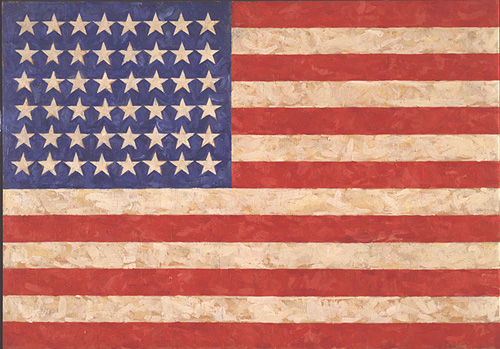 My Aunt Gladys once, when she read a thing in a magazine, wrote me a letter, saying she was so proud of me, because she had worked so hard to instill some respect for the American flag in her students, and she was glad the mark had been left on me.

I’m next up with one of our weekly One-on-One curator talks, Thursday 2 July at 6.30pm.Someone had the idea that the British curator should do 4th of July weekend.I’m going to be talking about Jasper Johns’ Flag (1958), one of his series of pictures, if they are pictures, of the flag of the United States.SFMOMA has another of these (not now on view), from 1960-69, made from lead.The first in the series, Flag (1954-55), is in the collection of MoMA in New York.

I know this series fairly well.I used to teach about it at Open University residential schools in the late 1990s, relying on Fred Orton’s book Figuring Jasper Johns, and the related curriculum materials he made for the OU. The quotations in this post, (three from Emile de Antonio’s 1973 film Painters Painting), my facts, and many of my ideas about Flag come from that book.I’d say that Orton—who was associated with the Conceptual Art group Art & Language—sees Johns from a Conceptual Art perspective. About the Flag in the MoMA collection Orton asks a Conceptualist’s question: is it a flag or a painting?In other words, has Johns made a painting of a flag, or made a flag with paint?

When I stopped teaching his work, I didn’t think about Johns again for a long while, until, recently, I saw a poster of a Johns Flag, quite large, hanging in the Visa Section of the U.S. Embassy in London.I’ve seen it there a few times in the last couple of years, at various interviews.There are a couple of other posters of paintings and, of course, there are some other American flags (though not as many as you would expect).The flag-like object in SFMOMA (or MoMA) is probably not a flag, nor is the poster of Flag in the Museum Store; the poster in the Embassy, I’m not so sure.And if someone stuck a poster of Flag in the window of his big rig, or burned one in a street somewhere, it’s a flag. Meaning is use.

Some people thought he was anti-American… that he was a man who protested against the symbols of America, the flag. At the time there really was no special reason for it: there was no Vietnam War… There was McCarthy.No, McCarthy had disappeared a long time before that.

The original Flag, of 1954-55, was in Johns’ first solo show at the Leo Castelli Gallery, in New York, in January and February 1958.Alfred H. Barr Jr., former Director of MoMA but at that time the Director of Collections, wanted to acquire it for the Museum.The acquisition was blocked by the Committee on the Museum Collection (someone wondered if buying Flag ‘might not leave the Museum open to attack from groups like the American Legion’), and the matter was referred to the Board of Trustees.The Board also decided against buying Flag, ‘fearing that it would offend patriotic sensibilities’.The work eventually entered the MoMA collection in 1973, as the gift of Philip Johnson (who had been an anti-Johns member of the Committee on the Museum Collection in 1958), in honor of Barr on the occasion of his retirement.

By 1958, McCarthy had disappeared, but in 1954 he hadn’t yet.The Army-McCarthy Hearings (widely televised at the time, and, by the way, the subject of de Antonio’s amazing 1964 film Point of Order!)took place in the summer of that year, not long before Johns conceived of Flag.Patriotism and the flag were hot issues in 1954.On Flag Day, 14 June, Eisenhower approved controversial legislation that added the words ‘under God’ to the Pledge of Allegiance.On 10 November, the dedication of the Iwo Jima Marine Memorial at Arlington National Cemetery took place.Johns, himself, had been discharged from the army only two years before.Is Johns’ Flag for or against the American flag?Impossible to say.

The Flag on view now at SFMOMA was painted in 1958, shortly after the Castelli show.Like the ’54-55 Flag, it shows the 26th flag of the United States, with 48 stars (the 27th flag was instituted 4 July, 1959, and the twenty-eighth and current flag, on 4 July, 1960, following the granting of statehood to Alaska and Hawaii; later Flags by Johns show the 50 star version). SFMOMA’s Flag is, in fact, not in this museum’s collection.It is on extended loan from Leo Castelli’s son Jean Christophe.We’re very lucky to have it.It was previously shown in the Centre Pompidou’s 2001 exhibition Les Années Pop (The Pop Years), and before that—I love this fact—it was on loan to the US Embassy in Paris for the tenure of Ambassador Felix G. Rohatyn.Imagine it hanging in the Ambassador’s office.It originally entered France as diplomatic cargo, and when the painting came to San Francisco, transport was again facilitated by the US State Department.

Emile de Antonio: What about Dada?

My remarks here have been about what kind of flag Flag is. On Thursday, I’ll say some things about what kind of painting it is, about the lesson of Marcel Duchamp, lessons for Andy Warhol, and the glorious indifference Flag seems to have toward something that you would think it impossible to be indifferent about.I hope you can be there.