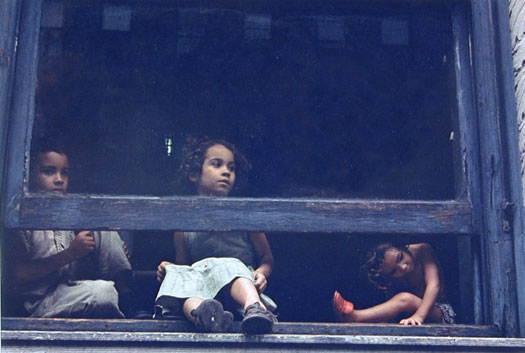 It’s a sad spring in the world of photography: Helen Levitt passed away at the end of March—quietly, in her sleep, at the age of 95. New York has lost its great visionary poet, who photographed scenes from everyday life with unsurpassed wit and imagination. We feel the loss acutely here at SFMOMA, where her work has been admired, collected, and celebrated. In 1991, SFMOMA collaborated with the Met on Ms. Levitt’s first retrospective—a major event that brought renewed attention to her work after it had been neglected for decades. From a personal perspective, the news of Helen’s death left me stunned and bereft. Partly that’s because I’m writing a dissertation on her work, but mostly because she had become a treasured friend. I had the immeasurable pleasure of spending many months with Helen in New York City: I’d come around in the afternoon, bring her apple or cherry pie, and spend the evening transfixed by her opinions, anecdotes, jokes, and memories. 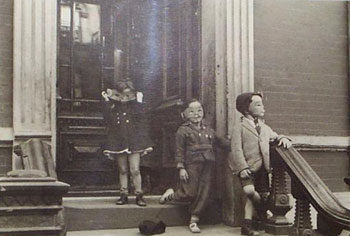 Levitt started photographing in the mid 1930s, a young woman from Bensonhurst, Brooklyn, sorting out the possibilities before her. Unlike Walker Evans (who became her friend and was among her few peers in accomplishment) Levitt didn’t emerge from social or educational privilege: no extended stay in Paris, no Ivy League education. She got her start with a marginal gig as an apprentice in a Bronx commercial portrait studio, working for a photographer who was amiable and capable but, as she put it, a bit goofy. So she set out to educate her eye. In line with her ambition and intelligence, she availed herself of an extraordinary classroom: New York City, then the incubator of a major photographic renaissance. Levitt took herself to the Film & Photo League to see what the politically engaged photographers were doing, to learn darkroom and enlarging techniques, and to get acquainted with the Soviet avant-garde films being endlessly discussed. She frequented museums to learn how painters compose. She gorged on cinema: Cocteau’s Blood of a Poet, Dzigo Vertov’s Man with a Movie Camera, and Aleksandr Dovzhenko’s Aerograd, among her favorites. The breakthrough came between 1935 and 1936, when Henri Cartier-Bresson breezed into New York, bringing his 35 millimeter Leica, his sophisticated French artistic sensibility (he had studied painting in André Lhote’s studio), and his ardor for surrealism. “In the beginning I didn’t know what I was doing,” Levitt once told me. “It was a period of floundering around—I saw Cartier-Bresson and it clicked.”

What clicked? First, it was the technical possibilities of the 35 millimeter camera, and then the sense of a new modern style—casual but graceful, relying on quick-footed movement to yield surprising juxtapositions. More than that, she got from Cartier-Bresson implicit permission to blithely undercut the assumption that photographs are objective documents, giving straightforward evidence: just the facts, ma’am. She saw that her medium, for all its persuasive powers of realism, is most fertile when divulging reservoirs of fantasy lurking within everyday life. As the poet Paul Eluard put it, “There is another world,/ but it is within this one.” This paradoxical insight constituted the backbone of surrealism. Levitt grasped the point wholeheartedly without ever joining the surrealist clique or kowtowing to their garbled male-biased theorizing. She wasn’t one to succumb to the self-importance that beset the Andre Breton types. Modest to a fault, she’d say “I’m no theorist” if pressed to explain how she produced her singular body of work. “Just look at the pictures” (and we surely will, for years to come). 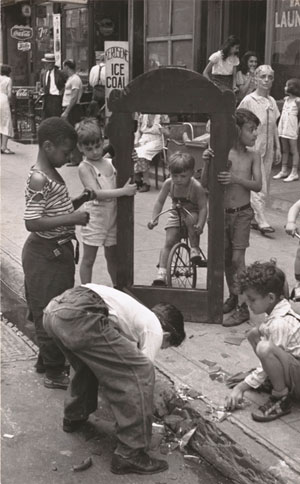 The pictures reveal Levitt’s subtle and humorous feminism, remarkably forward-thinking for its time. Levitt claimed the freedom to conceive street photography as a pleasantly transgressive pursuit, one energized by vulgarity, playfulness, and ribald laughter. She disguised her transgressiveness in plain view by making child’s play her leitmotif. Children: aren’t they cute and sweet? Not in Levitt’s pictures, where they are as complicated and contradictory as adults, ingenious and foolish, capable of gentleness and crassness, displaying folly and dignity. William Blake would have appreciated Levitt’s scenes of children playing in city streets, for their recognition that Songs of Innocence and Experience are contrapuntal tunes.

People were Helen Levitt’s great subject, and she had an unparalleled affinity for those imperfectly socialized, unpredictable people called children. She was endlessly fascinated by their mixed-up silliness, vulnerability, rudeness, resilience, inventiveness, and immeasurable complexity. Levitt, who couldn’t resist a mischievous joke, enjoyed puncturing the expected image of her as the grande dame of photography who must just love little children. Dining at a restaurant last summer, she glanced over to a noisy gaggle of frolicsome youngsters disrupting the quiet and declared, with a perfect poker face, “I hate kids.”

Yet her photographs admire the self-forgetfulness children display when completely immersed in their private play worlds-so much so that her best pictures seem to transform children (and adults) into characters from Shakespeare. The boys in this photograph might be the unruly players from A Midsummer Night’s Dream, restaged in Spanish Harlem in the midst of the Great Depression, on the brink of World War II. Levitt would pooh-pooh the notion that her work merits comparison with such august company. But if you look carefully at her photographs, you’ll discern a deep and abiding sense that life is comedy mingled with tragedy, or sometimes just a comedy of errors. Levitt photographed the city streets as theatrical spaces because she knew all the world’s a stage. 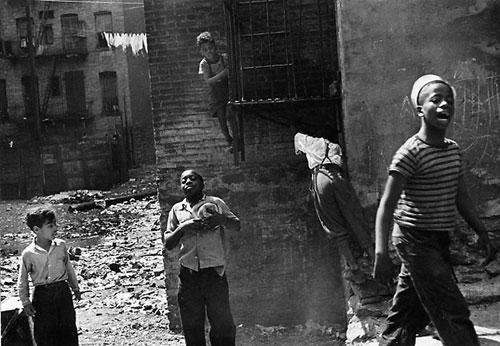 Levitt encountered these boys in a vacant New York lot sometime around 1940—long ago, yet the picture restores their uncanny immediacy, vitality, and presence. Levitt had a rare gift for intensifying photography’s illusion of bringing the vanished back to life, its puzzling sense of being both utterly ordinary and thoroughly mysterious. In the case of this picture, you’d almost think the kids are about to speak. Indeed, the handsome, cocky fellow at the center of the picture is gesturing toward his heart: he has taken off his hat to Helen Levitt. And so do we.