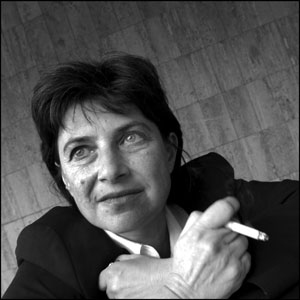 Getting a purchase on Chantal Akerman, the Paris-based film and video artist, who over the last forty years has created a monumental body of work from ignored and abandoned images, and the hidden rhythms of the everyday, is no small or easy task. There are many routes of approach, and almost as many identities and communities to claim her. The daughter of displaced Polish Jews, born and raised in Belgium, Akerman came of age chronologically and artistically in the social and political tumult of the late sixties. Though her work is inherently feminist, and evinces a polyvalent sexuality which has attracted great interest in the Bay Area, it eludes neat categorization, being based in direct experience beyond rational thought or verbalization. Starting as an experimental filmmaker, she quickly ventured into art-cinema features and experimental documentary, and has most recently become a gallery-based video installation artist, beginning in 1995 with the SFMOMA debut of Bordering on Fiction: Chantal Akerman’s “D’Est.” Her exposure since has included an exhibition at the Venice Biennale in 2001 and a retrospective at the Centre Georges Pompidou in 2004. Her video installation work Chantal Akerman: Moving Through Time and Space is currently touring the US. 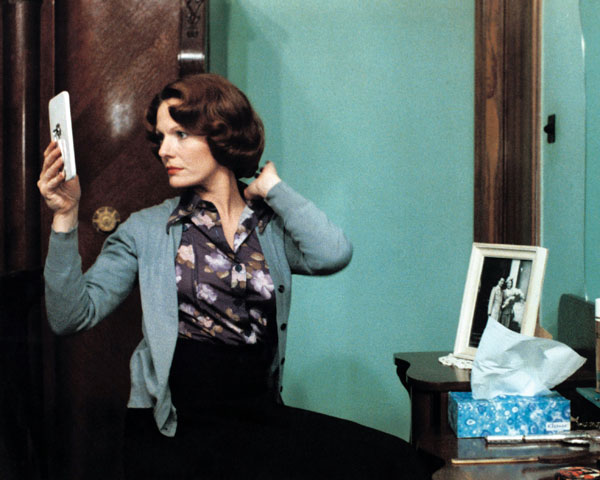 Akerman’s work measures the weight of millennia of Jewish and European history like no other: although interacting with a dizzying variety of genres, and pitched in multiple registers, from dark and heavy to evanescently light, it is an oeuvre made coherent by Akerman’s constant awareness of the tragic dimension, leading to a Zen-like appreciation of the depth and gravity of the present moment. Some of these genres and registers include: inner landscapes of solitary compulsion, as in Jeanne Dielman or the voyeuristic, Vertigo-influenced Proust adaptation, La captive (2000); forays into the comic like Toute une nuit (1982), a film poised somewhere between performance art and romantic comedy; or the nonpareil experimental documentaries which might be termed “materialist,” in that they foreground their anti-illusionism, and yet give a profound sense of the physical and psychic totality of the places they portray, such as News from Home (1977), Sud (1999), and D’Est, which captured fleeting images of an “unspoiled” Russia and Eastern Europe shortly after the fall of the Iron Curtain. D’Est was redeployed as the above-mentioned video installation Bordering on Fiction. 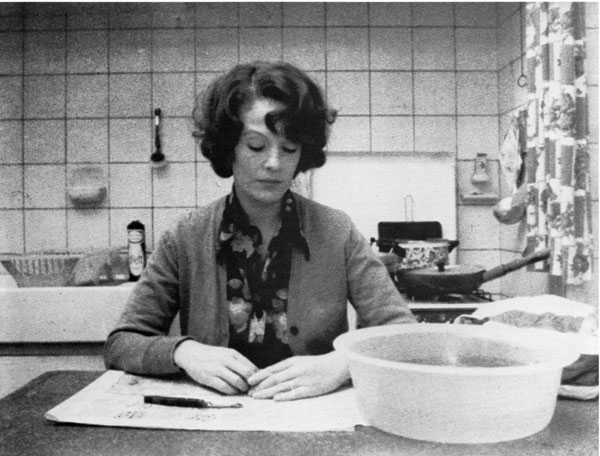 Jeanne Dielman, 23 quai du Commerce, 1080 Bruxelles, the capstone to SFMOMA’s current fourteen-work retrospective, and the object of cult veneration over the decades since its release, is a towering Mater-horn of modern cinema, and without doubt Akerman’s greatest work. Its title informs us precisely what we’ll be experiencing: the film is largely about a woman, her apartment, and, to a lesser extent, the surrounding environs of Brussels in which these are located. Living alone, aside from a sourish, prune-faced high school-age son who sleeps on a sofa-bed in the living room, Jeanne both inhabits and haunts her living quarters: the majority of the film’s shots take in with unprecedented detail and duration the various domestic duties which tie her to her environment, but she exhibits a psychic remove as palpable as all the apartment’s delicately, exquisitely photographed objects. To support this domicile, every afternoon she receives a male client into her bedroom for paid sex. The film takes place over the course of three days, and we are not allowed to see the goings-on in her bedroom until the climax of the third day, after the magic of her obsessive-compulsive household rituals has begun to wear off, and routine and the psychic composure it generates have begun to unravel… 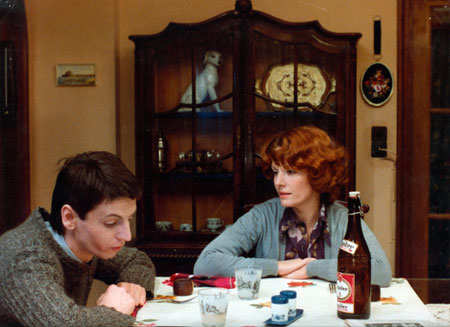 Jeanne Dielman’s three days are dealt with leisurely but inevitably over the course of three hours and twenty-one minutes. We are treated to the panoply of her obsessive activities: making coffee, preparing veal early in the day for the night’s supper, bathing, and scouring the bathtub afterwards, writing letters to relatives in Canada, going to the post office, storing her son’s bed away, etc. Each of Jeanne’s precise actions tends to be covered from beginning to end — when she makes coffee, or bathes, she really makes coffee or takes a bath, often in a single shot. This manner of miniature domestic drama, brilliantly rendered by Akerman, has caused Jeanne Dielman to be regarded as the first, greatest, and perhaps only masterpiece of “real-time” cinema, that is, narrative films whose scenes take place over the actual amount of time the actions in them would really take, these scenes being often shot from one camera position as proof of their “reality”:  No cutting = no gimmicks. Descriptions of this technique regularly scare away curious would-be viewers, adding a forbidding element to an otherwise seductive reputation. In discussing her methodology, however, Akerman stresses how she intuitively molded the moments of her film, and I can attest from many viewings that it’s a completely crafted work, simmering with precision, elegance, and narrative vigor. Although its sense of time is informed by Akerman’s early exposure to films by Andy Warhol and Michael Snow, the last time I saw it I was astonished by the amount of Hitchcockian suspense created by its long takes, expressionist use of sound (in fact, one could make a case for the whole film as an expressionist work), and its focus on telling details of Jeanne’s relationship to objects, especially as things go awry.

The centerpiece of Jeanne Dielman is the performance by Delphine Seyrig in the title role. Most famous in the US for Resnais’ Last Year at Marienbad (though one of her earliest screen roles had been in the New York-set Beat film Pull My Daisy, co-directed by Robert Frank and co-starring Allen Ginsberg), Seyrig was one of the iconic European stars of her generation, embodying a heady mix of mystery, glacial glamor, and an alluring, inwards-directed sensuality. Seyrig lends all of this to Jeanne, whose character was based on Akerman’s observations of her mother, an Auschwitz survivor. Together Seyrig and Akerman collaborate in creating one of the great enigmatic screen apparitions, and a film whose ultimate drama is the slow posing of the unanswerable riddle of Jeanne’s nature both to the audience and herself.

The full impact of the sensual intensity of Jeanne Dielman can only be experienced via a 35mm print projected onto the big screen, an event which hasn’t occurred in the Bay Area for many years. I’m told that the rare, pristine new print SFMOMA is showing has previously made its way through a projector only two or three times, and this, plus Akerman’s appearance at Saturday’s screening, constitute exciting opportunities for fan and neophyte alike to encounter this work and its creator. It’s become something of a parlor game for ambitious critics to anoint various thirty and forty-somethings as “greatest living filmmaker” (this while Godard, Resnais, and Rivette, say, are still kicking!). While not fully joining in such hyperbolic absurdity, I will nonetheless allow myself a bold claim — there is no more important film and video artist alive and working today than Chantal Akerman.

Jeanne Dielman, 23 quai du Commerce, 1080 Bruxelles, screens tonight and Saturday. Chantal Akerman will be here on Saturday to introduce the film, and for Q&A post. UPDATE: We’ve just gotten word that, due to unforeseen family circumstance, Ms Akerman will NOT be in San Francisco on Saturday. Stay tuned for further details and other potential guests–SS