Interview: Rudolf Frieling on The Art of Participation. Part II

Part two of my conversation with Curator of Media Arts, Rudolf Frieling, on The Art of Participation. Yesterday we covered some specific projects in the exhibition and what an ‘art of participation’ might be; today we’re talking about the build-it-yourself cardboard furniture in the Koret Visitor Education Center, and the particular challenges and delights of putting on an exhibition like this one in a museum setting. 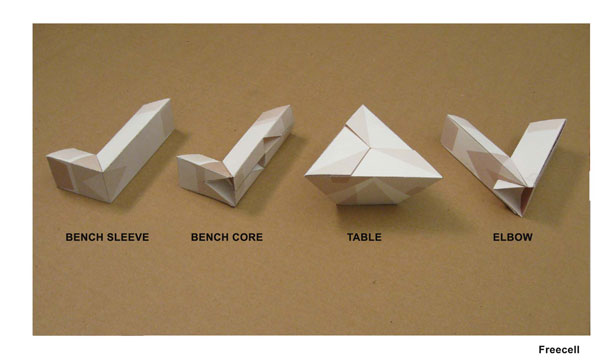 Let’s start with the transformation of our Koret Visitor Education Center and the Freecell commission. For the run of the exhibition, the ed center is being turned into something called “D-Space.” Can you talk about that?

One thing that is really key to this whole project as an exhibition is that we want to explore what it could mean for the museum to be not just a container for artworks, but actually a producer, or a site of production. And we’ve been thinking about the practice of institutional critique many artists developed in the 70s and 80s which in part involved leaving institutional spaces and going into alternative spaces, and the way some contemporary artists work in different kinds of social space, perhaps educational spaces, blurring the distinctions between them. In a museum we normally have a clear distinction between what is gallery space, what is social space, and what is educational space, and this is something that many contemporary artists would certainly want to challenge. 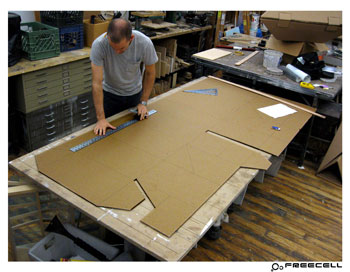 So, if I understand you correctly, you’re talking about a way we might mirror artistic practice, by attempting to blur the boundaries between the education spaces, the lecture halls, and the galleries of our own institution.

Right. My initial concept was to create a core zone, an open educational and performative space, right at the center of the whole show in the fourth-floor galleries, but for logistical reasons we had to relocate to the second floor, to our current educational center. So we thought, well how can we take the spirit of the show into that space and transform the space? We can ask artists to interpret that situation and to provide a different solution. We wanted to have a space that could be transformed by visitors, also by staff members, and be transformed for different uses, different functions, with the idea being that it could always be set up differently and so always provide a different experience.

Based on who was using it and for what purpose.

And you would never know quite what to expect before you get inside. So we asked an architectural and design group in New York, Freecell, to design pieces of furniture or some kind of reconfigurable structure based on a do-it-yourself model. They came up with a series of cardboard panels with perforations and instructions, to be folded into furniture. In the beginning they will be just rectangular shapes leaning against the wall, in an empty room, almost like pictures in a gallery, but that are to be taken off the wall and used, turned into something else-that is a truly participatory act.

So if we want to sit down to read a book or have a conversation or listen to a lecture in the center, we have to first build our own furniture, but we can also put it together however we like or in a way that will suit our particular desire or need.

Right, and these objects, once they are assembled, will lend themselves to certain functions, but they might also be reconfigured and used in ways that we can not foresee. I was always saying, why should we reinvent the table when the table is such a clear and successful structure? Precisely because we might embrace the idea of dysfunctionality-the fact that it becomes more difficult to do something maybe is what makes it more interesting-and provide an open situation. 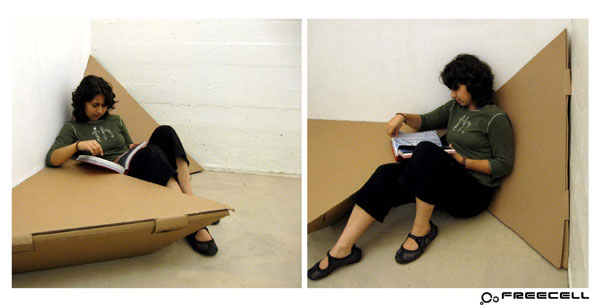 We’ve been talking here about the blurring of boundaries in the physical spaces of the museum and the change in the way a visitor will experience art in this exhibition. Something that’s interested me over the last 18 months or so while The Art of Participation has been in development is that this work also impacts how the museum itself operates, and not just for the duration of the show, but perhaps over the long term as well. Can you speak to that?

Sure—we are a museum that has departments with clearly assigned roles. The moment you try something new, we have to figure out how to deal with that. The curatorial team and the exhibition department are collaborating with the education department in transforming our educational center, but the responsibilities and distribution of labor is all of a sudden totally unclear. I think we have to reinvent ourselves and analyze what happens, and hopefully come to a different structuring of our processes. Perhaps a more open way of doing things. What happens in a museum—timing and controlling of processes—is so much based on the idea that you select things, you ship things, you unpack things, and you exhibit them and return them.

Right. So how can we turn the museum into a site of production and into a site of live events and into a site for different social functions, maybe temporarily. It is still a museum of course and not a clubhouse, but we know that artists have for some time now been turning the gallery into a discotheque or a lounge or restaurant or school, confusing barriers and functionalities, inviting confusion and instability. Indeterminacy becomes an inherent part of the artistic experience.

But which is perhaps antithetical to an institutional one.

There will always be a clash between the needs of a sustainable structure (like planning a budget) and the kind of improvisation that artists would like to do in a museum. To not do it, to not embrace this kind of practice, I think, would be the wrong answer. But there are challenges. There is a famous historic example of an exhibition by Robert Morris in 1971, at the Tate in London, that had to be closed after a few days because people were destroying some of the objects. There is an urge and an eagerness to do something and to participate that can be counterproductive to the usual aims of a museum.

Which are in part to collect and conserve.

On a broader level I would say collecting has become much more difficult. Collecting ephemera, or collecting works that evolve over a long time is inherently difficult for an institution. We’ve talked a lot about the difficulties of exhibiting the kinds of work that require participation, just in terms of sustainability. A lot more players are involved, in terms of making something happen. It’s not just the artist and curator and the exhibition crew, the works are more fluid and they change, and that is something that’s hard to plan for. We have to be ready to embrace things that are not planned to the minute detail, and perhaps think of an artwork as a quality rather than thinking of it as something that is unfinished or that needs to be finished. Other implications for a museum of modern art might be in part about the expectations our public could have—do they expect to come and see great artworks on the wall, or will they complain if they don’t see that? We do want to offer the public different experiences of what modern or contemporary art is.

In the exhibition catalogue, you ask whether or not we’ve come to understand the radical implications of participatory work; my question is, can we view this work as radical now? Or is it absorbed into the fabric of what we are now comfortable calling artistic practice and therefore part of the status quo? Can open or participatory practice today still carry the implications of radicality that it once did?

There are two issues that we need to address: one is the institution’s ability to deal with open and process-based works, and that has been and will also be in the future a structural conflict. The institutional solution has often been to either close the openness of the work, even fetishize it as an object, or to not show the work. And I don’t think that is an option because this kind of work has become such an important aspect of contemporary practice. The second issue is that, within the discourse of art, media art and contemporary art are often on two distinct and separate trajectories. They do not talk to each other. I would like to bridge this gap. You’d be surprised to hear how many art world practitioners still take issue with technology, or vice versa, how many media art practitioners take issue with the institutionalization of art. Both sides need to take into account that 60s and 70s notions of radicality are already challenged when networking and communication are mainstream practices in our everyday life. “Radicality” is perhaps not the key idea here, but instead, various degrees of participation in the public realm.

Something else striking about the exhibition of course is that a lot of the works are FUN, and funny. It will be a pleasure to engage with them. I’m really looking forward to the show.

I think a lot of people will agree that. One of the things I think we should have in our life is fun. Life should be more fun and not just work. How can you make that happen in a place that is maybe not geared for “fun”? Would we contribute to the “entertainment” industry in a museum? I think we should be able to provide something that only a museum can provide. Perhaps a more dubious, ambivalent, but culturally fascinating experience. When I perform a sculpture by Erwin Wurm, I’m sure I’m going to look ridiculous in the perception of others, maybe in my own perception as well. But having allowed that one moment of looking ridiculous, but actually performing an artwork, I think that’s a unique opportunity.

On a more subtle level, take George Brecht, who was a key player in the Fluxus movement. We’ll be exhibiting some of his instruction cards, and you will be able to read them-one piece is called Exit, and the card just says “exit.” So the moment you exit the show you might think of it as you performing this piece. Your life becomes, temporarily, an artwork. Blurring the distinction between art and life has been a dream for many artists, especially in the 60s. It is clear that life will always be different from art; but perhaps infiltrating life with artistic moments and experiences is something the museum can provide.

The Art of Participation opens Saturday, and the public preview, open to all, is TONIGHT! Thursday.