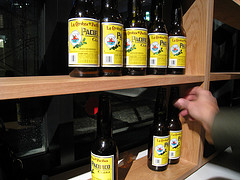 Dear reader, this is Tammy.

Last night, as part of the ongoing exhibition The Art of Participation, SFMOMA hosted the first in the series of the Tom Marioni salons: The Act of Drinking Beer with Friends Is the Highest Form of Art. Bringing this simple act into a museum setting required the building of a bar (which I am petitioning to keep well-stocked beyond the show) in the Koret Center, ordering twelve cases of Pacifico beer from the local Bevmo, the completion of many pink and green logistics forms, the administration of drink tickets, and the acquiring of a bartender for each night. Last night’s barkeep was Curator of Media Arts, Rudolf Frieling. It was a special occasion, as it is the only time I’ve ever ordered a beer from my boss.

The place filled up quickly with friends and we all drank (with gusto). We were doing it! We were creating art and I could feel it: tiny carbonated bubbles and a general loosening of the seams. The game of quarters was not attempted, but the idea was bandied about. Tom Marioni walked to the podium and gave his address. He was loaded–with jokes. And read with a slight impish nature. A poet appeared on the scene. He had a sign that read “Poems for Sale.” I handed him a dollar. He asked, “What would you like a poem about?” I thought and said “A dark window.” He licked his lips, took a glug from the bottle and began typing on his little typewriter. He finished and handed me a slip of paper with my poem on it. It read:

Well worth every cent!

The next salon will be Thursday, November 20th at 5pm. Anne Colvin is bartending, Bill Morrison is the guest reader. I hope you can make it.