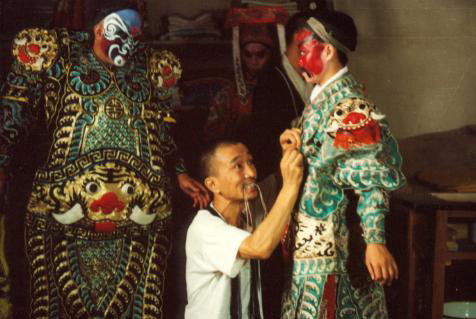 Greetings readers, this is Gina Basso, Public Programs Associate and semi-regular OPEN SPACE contributor. I’m about to delve right in to my first ever post….here I go…

You may have read Megan Brian’s post last week about the print traffic woes getting films from the China Film Archive for the films scheduled in the Rediscovering the 4th Generation series currently underway. And the saga continues: one of the films arrived sans subtitles (Mandarin, anyone?). Despite the myriad ways to handle such a predicament, we decided the print would have to be replaced with a subtitled DVD (thanks Facets Multimedia!) for two of the screenings. But don’t worry! the print didn’t come all this way for nothing and we’re showing it anyway, on October 30, in Mandarin, NO subtitles! Once you know the story, just relish in the opportunity to see a visually stunning work that captures the vivid colors of the costumes and the make-up, and the performative elements of Chinese opera. 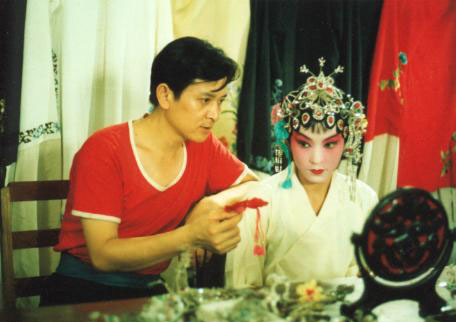 Woman Demon Human is the only film in this series to be directed by a woman, Huang Shuqin. It’s an imaginative bio-pic of famed Beijing Opera actor, Pei Yanling, who was best known for her portrayal of male roles and who stars in the film, playing a fictional version of herself, Qiu Yun. (Didn’t Richard Pryor do that in Jo Jo Dancer Your Life is Calling?) With the opera as its backdrop, the film follows the rise of the young opera star as she experiences love, loss, tragedy, and the trappings of gender conventions. In fact, the real drama lies backstage where tears flow, tempers flair, and performers share gossip with hushes, whispers, and knowing looks. The backstage scenes convey the frenetic energy of the opera’s inner-workings, from the laborious process of applying make-up and getting into costume to the “limbering up” (stretching and contorting)— painful reminders of the physical lengths the performers must endure for their art. 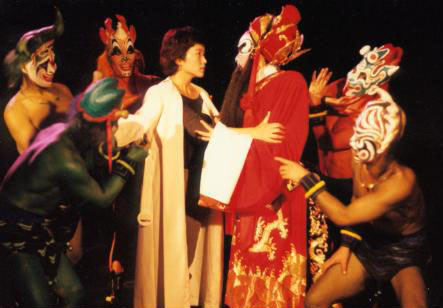 Qiu/Pei’s defiance of traditional roles in the face of public ridicule is at the heart of the story, and  the catalyst that allows her to sink more deeply into her art. Cutting her hair short – “she looks more boy than boy” remarks a character – she raises suspicions from those who gasp at her will to no longer play female roles and to be “nobody’s bride.” Cross-dressing in Chinese opera is age-old (Yuan Dynasty), but it’s more common for men to adopt female roles (dan). This female-to-male reversal illuminates Pei Yanling’s real-life controversy as an opera performer. In the film, her onstage performances as the mythical Zhang Kui, the underworld god and vanquisher of ghosts and demons, act as a meta-text for her life off-stage, mirroring her desire to chase the ghosts haunting her life and challenging traditional customs in modern opera. Director Shuqin also uses the literal mirror, not only as a way to suggest the character’s identity formation, its fragmentation and merging of multiple selves into one, but also as a device to move the story along. Woman Demon Human spans Pei Yanling’s career from the late 1950s to the 1980s and each chapter in her life is signaled by her pondering her reflection in the mirror and seeing two selves – in costume as Zhang Kui and without. As she gazes into the mirror you’re whizzed off into the next dramatic epoch.