I WANT YOU: Sadie Lune 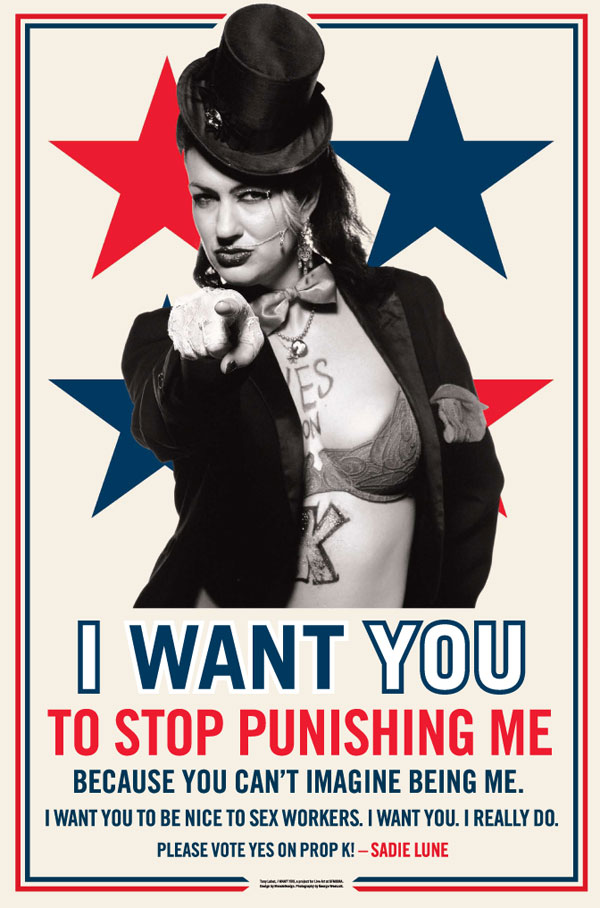 Tony Labat, I WANT YOU, a project for Live Art at SFMOMA. Design by MendeDesign. Photography by George Westcot.

Performer, artist, ‘pleasure activist,’ and professional dominatrix Sadie Lune was the top-scoring I WANT YOU winner, with one of the most directly activist performances of the night. If you haven’t been watching the blog, back on September 11th,  Tony Labat staged an event in our Wattis Theater, riffing on the iconic “I Want You” army recruitment campaigns, asking Bay Area residents to make their own demands of the public in live performances, with the audience determining the five winners via scantron-style voting. The winners have had their slogans—and their likenesses—transformed into posters which are going up all over town this week.

Now of course SFMOMA can’t take an endorsement position on any local initiatives, but I’m glad to post Sadie’s video of her own winning performance, shot that night in the theater to a rowdy and supportive constituency:

Sadie Lune is a multi-media artist, absurdist, sex worker and pleasure activist. She has performed with revolutionary sex artists Carol Queen, Annie Sprinkle, and Nina Hartley and is a co-founder of Paul Reubens Day. Sadie draws the comic series “Saturn Returns Komyx” for $pread magazine, and is working on an anthology of essays by the personal partners of sex workers. Her short film “Yum” won the People’s Choice award in the 2007 Good Vibrations Amateur Erotic Film Competition. Interactive interventionist social art totally gives Sadie a boner. She’s a recent convert to occasional blogging: writing sporadically for the comic blog BreakUp Girl as well as her own three (!) blogs: Sadie Wants a Wife, Whores in the Woods, and Working Hearts. Sadie identifies as a mermaid and is currently looking for collaborators, patrons, and a wife. She aspires to show more work in streets and museums. Sadie lives in the Mission District of San Francisco with her three snakes and her beloved roommate, Irene.

Tags: AND THE WINNERS ARE, I WANT YOU, Live Art, Sadie Lune, Tony Labat, YES ON PROP K