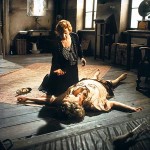 And so at last we bid our beloved friend Franz Biberkopf goodbye. It’s been a long but wonderful month watching, thinking, and talking together with everyone about all things Berlin A & RWF. Farewell Mieze, farewell Lina, farewell Franzë, Cilly, Ida, Pums, Meck—look, even in a blogpost I’m loathe to wish “fare well” to those awful villains Rheinhold & Luders!—

Dominic & I both want to thank all of our round-table-ees: Brandon, Cynthia, Julian, & Stephen, as well as Brecht our projectionist, Dana Ward our Cincinnati correspondent, and everyone else who’s been along with us in the theater on Thursdays and Saturdays, and in the comment boxes all along the way.

It seems kind of sweetly fitting to close with this last post in from Dana Ward, who didn’t quite make the summit with us:

“…What a shame for me that just as I had calibrated the pace of my reading with the bundles of your viewing, I was ‘laid low’, (to use a favorite phrase of Döbin’s) by a monstrous toothache. I abandoned writing and reading for distractions more befitting one in constant pain and deprived of sleep: cooking the softest of possible meals, watching copious amounts of baseball, and, if awoken by the nagging tooth, wandering about in the yard, staring at my neighbor’s mimosa tree, damp and sparkly in the sunrise, Codeine just starting to numb me up some. So this is an interruption story. And a boo-hoo story, but don’t cry for me! During most of these hours I was thinking of Biberkopf. I thought a lot too about Döbin’s Berlin, of the myriad intimate tragedies derived from enforced economic stratification, a stratification that’s so like our own, and how these wounds make a polity available to the most malign cures, how National Socialism exploited all that pain. Perhaps it’s redundant to say so. But that causality, obvious as it is, felt unbearable in its revivification as I paced in the yard waiting for my molar nerve to scream itself hoarse.

Its ironic that just as I entered into a few days of mild phantasmagoria, Döbin’s novel had arrived in a similar state. The juxtaposition of set pieces was growing more disturbing. Franz’s vision of the slaughterhouse was seen through a lens of creepy paternalistic gangster benevolence, as if to say “sorry little piggies, it’s just business”. He was almost Ronald Reagan! Then his uber-maudlin Job lament, which, in its Christianized bathos was like a tonal prophecy of something out of Kerouac. It was that evening, not long after the disembodied voice revealed itself as Satan, that the toothache arrived and I left behind the book.

At work I’ve kept up with the discussion on the blog, and wished terribly that I’d been reading along. I’ve got a root canal in the morning, and my neighbor is outside right now trimming branches away from her mimosa, scaling back my little narcotic totem which I hope I won’t need for comfort at dawn, as I should be asleep. So I’m down here halfway to the top of Mt. Everest. Sorry I didn’t get to the top with y’all. Once I’ve made it to the summit and back down again, maybe later we’ll all compare notes on the view.”