Last Thursday SFMOMA assistant curators of painting and sculpture Apsara DiQuinzio & Alison Gass announced the 2008 SECA Art Award recipients. The SECA Award is an extremely competitive biennial prize with a long local history: since 1967 sixty-two Bay Area artists have been honored with the Award, which includes an exhibition here at the museum, an accompanying catalogue, and a cash prize. Hundreds of artists are nominated but only four are typically selected. Ali & Apsara agreed to answer a few questions about this round’s selection and award process. I don’t believe in all the years the award’s been given there’s been a vehicle like the blog to make this process transparent, and to allow us to open it up to discussion. So, a first. Many thanks to Ali & Apsara. 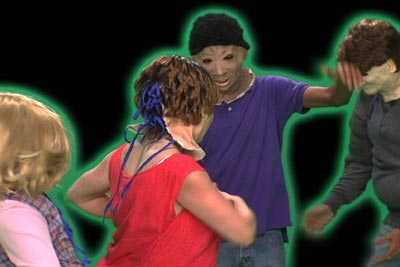 SS: Let’s start by illuminating the basic frame of the SECA award process, since many of our readers will be unfamiliar with how it works. I understand that only artists who are nominated are eligible for consideration. Who nominates the artists? Who selects the finalists, and based on what kinds of criteria?

AG and ADQ: We work with a large pool of professionals in the community to generate the list of artists nominated for SECA, including local curators, art historians, gallery owners and directors, former SECA artists, SECA members, SFMOMA staff, patrons, and alternative spaces. Once we compile this list we send out a letter that specifies the parameters of the SECA award and invites them to nominate up to five artists.

After we receive these nominations, we then we send a letter to each artist nominated, inviting them to apply for the award. Surprisingly, some artists chose not to. We then review each of the applications, ultimately narrowing it down to approximately thirty finalists with whom we do studio visits.

SS: Really? Some artists who are nominated choose not to apply? I’m curious about this. Do you have any insight why they might choose not to?

ADQ: I know. We were surprised ourselves to learn that. I’m not sure why they didn’t but it would be interesting to find out. Really, it could be anything though, bad timing, busy schedules, fear of rejection, they don’t like the process, anything.

SS: It would be interesting to hear from artists who’ve declined to apply. What happens once you’ve narrowed the field to the thirty finalists?

AG and ADQ: Then the SECA chair, Dick Drossler, works very closely with the SECA coordinator, Heather Holt, to generate a schedule of studio visits. They try to group the finalists geographically so that we can do five or six consecutive visits each day over a period of about four to five months. In the end we did thirty-one studio visits on six different Saturdays from the end of January to the beginning of May.

SECA is funded by a terrific auxiliary committee at SFMOMA, people who are committed to both the development of Bay Area contemporary art, the support of local artists, and who are committed to SFMOMA’s engagement with the community. As a reflection of this community spirit SECA members also attend the studio visits. The group of about sixty who go on the visits are divided into two groups and as curators, we each go with one group and pile onto charter buses to go to each studio together.

SS: Will you describe the series of studio visits?

AG and ADQ: The visits are really the best part of the process. As the curators, we talk more on the bus about the artist we are going to see. We then squeeze into the artist’s studio or selected venue. If the artist has an exhibition up, we often meet at his/her gallery to see the work. We imagine it can be a little overwhelming for the artist to suddenly have to host 30 people (twice in one day!) in what is often times a tiny studio space. Then we have a conversation with the artist about his/her work. Each studio visit is only 20 minutes, so there is often a lot of information to cover in that time. Overall, it is a very open process, and anyone who has questions for the artist is encouraged to ask. After the five or six visits, we all head back to SFMOMA where we have lunch around a giant table and discuss what we saw that day.

SS: What was the most surprising part of the process for each of you? The most enjoyable?

AG: I am consistently amazed at how much you can learn from visits like this, despite their short length. Each of the artists is so articulate and generous with their time. They give so much of themselves to the visit and I always leave feeling like I want to thank them profusely. I would definitely say the most enjoyable part is seeing the work in person and learning more about the work firsthand. It is an honor as a curator to get to stand in front of work with the artist there.

ADQ: Absolutely. I truly enjoy the chance to speak with each of the artists we visit and learn more about their work. We are really putting them on the spot and invading their spaces during these visits, and they are consistently engaging, generous, and welcoming. It is a very special thing to be able to take part in this kind of dialogue with an artist and with a group of people who care so much about the artist and his/her work. We take it very seriously and greatly respect and appreciate the artists for how much they give of themselves during the process. We have also just begun another enjoyable aspect of the process, which is collaborating with the award winners to produce the exhibition. This is when we are able to take the dialogue to the next level.

SS: You’re both east coast transplants, and through this round of SECA visits have had the opportunity to see quite close-up a nice cross-section of the artists who are working here. Can you talk a little bit about what you’ve seen here in the Bay Area that is different or similar to art practice in other parts of the country?

AG: I would say I came here with a little New York-centricness, which is hard to admit and makes me feel bad. However, I can say it because I was totally astounded by what I saw. San Francisco has a thriving, world-class art world. At SFMOMA, we spend so much time looking at the contemporary art trends from around the world, it is important for us to have SECA to EXPLICITLY focus on the work right around us. I think both things are important, because SFMOMA (and other institutions in the Bay area) do a great service for the local artistic community I hope by bringing art from everywhere here, so artists working here get a chance in their own back yard to see their work in context and can then dialogue with history as well. But, I have to say, it was important for me to realize that I can see fantastic work without getting on a plane. I would say the biggest difference I have felt in San Francisco from New York is a real artistic community. In New York it is so fractured and fragmented without a sense of communal identity at all. I would say that this newest generation of artist in San Francisco seems to be doing a terrific job of maintaining a sense of supportive community, without cultivating regional identity (I mean while still being very connected to artistic practices from other places).

ADQ: Yes, this seems to be an ongoing stigma San Francisco has to contend with: the regional. I think overcoming this stereotype is important not only for the artists who live and work here, so that their work can be seen within a larger, global context, but it is also important for San Francisco itself. Upon arrival, I repeatedly heard people describe San Francisco’s art scene as “provincial”, which was a very disconcerting thing to hear, when in fact, New York can often actually be more insular in its myopic tendency to only look at work being exhibited in New York galleries. I think what is often lacking in New York is an international or even national perspective. Since I arrived two years ago, this city has had a great mix of important international artists come to the Bay Area and display their work, such as Allora and Calzadilla, Felix Schramm, Lucy McKenzie, Rosalind Nashashibi, and many of the artists in the ongoing Passengers exhibition at the Wattis, not to mention Jeff Wall, Douglas Gordon, Olafur Eliasson, and those others who come as part of SFAI’s and CCA’s excellent visiting artist lecture programs. To my mind the San Francisco Bay Area seems to be more international and thriving than New York in many instances. It troubles me to hear the word “provincial” ascribed to the Bay Area. If artists living in San Francisco are to be seen in expanded contexts and in other cities, it is our duty as art professionals to stop using this word and to get out there and look at as much work being made in this community as possible, and then to bring that work to larger audiences. One way we can do this is through implementing these kinds of awards, such as SECA (which has been occurring biennially since 1967), and producing exhibitions that are devoted to highly sophisticated work being made by artists living here, and then to internationally contextualize the work with other work being made today. This is something Ali and I have kept in mind during this process and is something we will continually strive for as we produce this exhibition. The other thing that would help is to havean international biennial in San Francisco, but that is another conversation with an entirely different set of problems…

SS: I’d be curious to take up the question of an SF Biennial up in another interview! In the meantime: Winning a SECA Award can have a substantial impact on the career of a developing artist. This highly competitive award is coveted by local artists, and emotions often run high around the selection process. Surely this is true for the artists themselves, but I imagine it is also true for the SECA committee and for you as well. As curators for this award, can you talk a little bit about the difficulties and rewards in making final decisions?

AG and ADQ: Yes, this is the really challenging part of it, making that ultimate decision of who to select, which necessitates having to exclude so many talented artists who are also deserving. We had rigorous discussions about each artist’s work after meeting with them, with the SECA members and then with each other later. In the end, we could have given the award to more people. Each of the 31 finalists was very talented, which made the decision especially difficult in the end, and it was something we both lost a lot of sleep over. It is not a decision we took lightly. It was wonderful to be able to tell the winners that they won, but after having the finalists open up their studios and their practices to us, it felt really hard to have to leave people out.

Ultimately though, we feel very confident with the four artists we did select: Tauba Auerbach, Desiree Holman, Jordan Kantor, and Trevor Paglen–who are each making exceptional, truly innovative work. SECA was an amazing experience for both of us–completely positive in the sense that we directly experienced the richness and strength of this artistic community. And we hope to be able to continue the dialogue that we began with so many of artists we were able to visit with this time.