It’s all part of turning 40: the reunions with old friends (and they’re so old aren’t they?), the memories of youthful excess and lost opportunities, and a mildly self-pitying feeling that, from now on, things are going to stay pretty much how they are, or get worse.

It’s the 40th anniversary, this month, of May ’68 – the date of the student protests in Paris, but also one that evokes a whole era of revolt and social change around the world. The legacy of the protest era has reached middle age. Various people are marking the occasion. I’ve put together a film series called Around ’68. Also in the Bay Area, Steve Seid at the Pacific Film Archive has done a similar series called The Clash of ’68; it’s linked to the Berkeley Art Museum’s Serge Hambourg exhibition. We share one title, Nagisa Oshima’s The Man Who Left His Will on Film.

Anniversaries aren’t interesting in themselves. Commemorating them is only worthwhile if it’s an opportunity to consider the meaning of an historical event, its legacy, and the difference between then and now. I’m not going to try and do that here; the films do it better. That’s why I wanted to present this series. The extra reason, I confess, is that this month is my 40th anniversary too.

I guess that having been born in May ‘68 (on the 7th, in the middle of les événements) has made me a little more interested in that period than I would have been otherwise. But lots of people roughly my age (not just the baby boomers who own the 60s) have been fascinated by those times. I think it’s something to do with the irony of being born during the protest era, which means that we first became world-aware during an especially cynical time of minimum social hope. Growing up in England, the first election I remember was that of Margaret Thatcher in 1979 (followed, a year later, by Ronald Reagan’s). Thatcher liked to say ‘there’s no such thing as society, there are only individual men and women’, and (darkly) ‘there is no alternative’ (the phrase caught on and became known, for short, as TINA). The one thing teenagers have a right to expect is that there could be alternatives. It was hard even to play at them. We didn’t have any energizing, politicized sub-culture: too young for punk, a little too old by the time dance culture spread out of Manchester. We had synth pop and New Romantics. It was grim. No wonder so many of us (not me) became Goths. 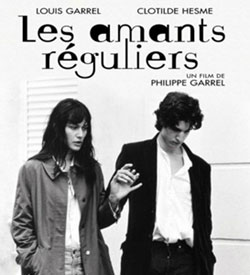 So it was easy, too easy, for us to romanticize, even eroticize, the ‘60s, and May ‘68 in particular. (That’s what still appeals to some of us about Bernardo Bertolucci’s awful The Dreamers, which we’re not showing, and what’s so rigorously avoided in another recent film of the May ’68 events in Paris, Louis Garrel’s excellent Regular Lovers, which we are showing.) It advertised itself as a time when young people insisted on alternatives.

The thrall of May ’68, like any thrall, should be resisted. For one thing, it makes it harder to focus on what’s specific about our own times. But ‘68 does give us some ways of measuring the present. Four years ago, before I moved from London to San Francisco, I helped organize a symposium at the Royal College of Art that we called ‘The Unsurpassable Sixties’. It was about the hold that decade seems still to have over us – in art, culture, politics, society. You can see it today everywhere: in the way a museum like SFMOMA is curated (the 60s crisis of Modernism is often our center of gravity), in the current presidential contests, in the Bay Area’s favorite self-images (someone once said to me that San Francisco is a ‘museum of the ‘60s’ – I don’t agree but I know what she meant). At the RCA that day we did talk about the legacies of that time, and about the differences between then and now. And someone (a baby boomer) said something (he might have been quoting someone) that really stuck with me:

He said the difference is that, nowadays, it’s easier to imagine the end of the world than the end of capitalism.

It’s a compact and strangely compelling statement that contains, I think, a number of truths and half-truths. Different ones for different people. For me, it’s mainly about imagination and its blind spots. It’s about which alternatives have images and which don’t. Art, including cinema, is almost useless as a means of social change. But art, especially cinema I’d say, can be good at giving us images of alternatives; and that’s the minimum we have a right to expect.