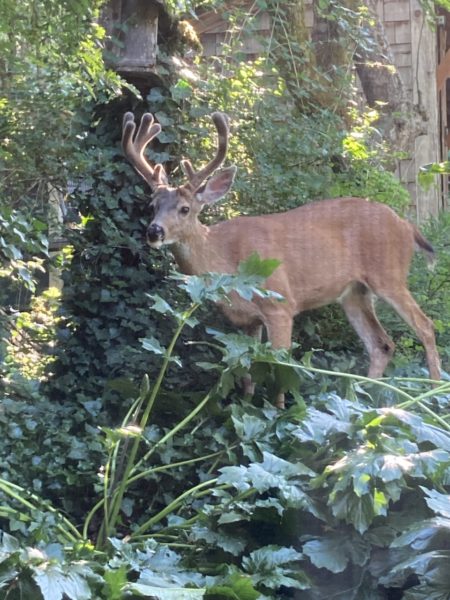 The crunch of leaves caught my attention in the nearly silent room and I turned my head toward the window and the waning sun. The young stag, with new horns not yet shorn of youthful fuzz, raised his head, too, as if he had heard me looking. I reached for my phone and took a photograph of him, framed in the square-shaped window. It only seemed right to memorialize our meeting. He was the only other being I had seen in the flesh that day, in the endless, uncountable, solitary days.

At that moment, I was standing in a squarish building overlooked by a modern two-story home, at the top of the property in a hilly suburb of Eugene, Oregon. The Little Green Cottage was what I had taken to calling the dwelling that had been my haven since August 2020, when the gift of rent-free housing bestowed by near-strangers saved me from becoming another houseless person in the middle of a pandemic that was yet playing musical chairs with human lives. The cottage was like something out of a fairy tale, nestled among picturesque trees and surrounded by verdant gardens that created natural fences, though these proved to be no barrier for the family and friends of the young stag, who regularly crashed through them to eat whatever they found appetizing. The woods contained numerous animal friends — more deer, pheasants, turkeys —completing a fantasy that was hard not to admire despite the grim reality of the world.

I was finishing up a teaching fellowship in Richmond, Virginia when the pandemic hit, throwing a wrench into my academic job hunt. Planned campus visits were immediately canceled, residencies never responded to previously submitted applications, and the world went silent as we were all suddenly, fearfully, trapped indoors. My fellowship housing was kindly extended till July but at the end of that time, with no other options for work on the horizon, a vulnerable, chance conversation with a new colleague about my situation resulted in the offer to stay in the Little Green Cottage in Eugene. A timely kindness for which there are still no adequate words to express my gratitude to him and his sweet little family.

While many people — for better or worse — got to shelter in place with family, as an immigrant to the United States without any family in the country, I spent the pandemic alone. Since I arrived from Nigeria as a teen, the specter of loneliness has followed me around in literal and metaphorical variants. It’s been the constant theme of workdays, happy days, birthdays, graduations, and other life events that I relayed to my family from a distance. Any immigrant will tell you that there are mechanisms for dealing with loss, guilt, and the homesickness that attends every event in which you can’t turn to someone who will understand the in-joke that must then die on your lips. As an introvert, not all the days I spend alone are unwelcome, but there is nothing quite like the loneliness borne of homesickness. The pandemic brought with it a complete absence of human contact for so long that it was more than my introversion could abide — particularly as it was coupled with the racial reckoning and protests sparked by a most vivid and horrifying death captured on camera last June. I now have a deeper, visceral understanding of what it means to be alone in the US as a Black woman and an immigrant.

My artwork interrogates the immigrant experience, especially the liminal space(s) that immigrants find themselves in, between countries, between languages, between cultures. The experience can be hard to explain to natural-born citizens, an ephemeral thing. However, a pandemic —in which the whole world is in lockdown, human contact can be deadly, and endlessly busy thoroughfares like Broad Street sit empty like black lashes across the urbanscape of Richmond — is a most tangible and excruciating example of this space.

Eugene had that liminal quality from the start. Adrift between jobs, between worlds, I was unmoored and untethered to the people and place. I had few acquaintances besides my benefactor and his family: a few fellow artists and professors of fiber arts who worked at the University of Oregon. When I arrived in town, they very kindly brought me non-perishables and dry foodstuffs like rice and beans. The CDC was then allowing outdoor gatherings with masks on, and I was invited to a meetup in the park, and another in a professor’s backyard in the same hilly suburb. But plans for future gatherings were soon dashed due to the fickle virus and changing CDC rules, and any hope for connection was reduced to one of the artist-profs checking in with me via text once in a while. Her communications, and those with chosen family in other locations, acted as reprieves from the solitude that stretched on like an insufferable earworm in my mind.

The cottage was not very large and I didn’t have enough floor space to have a dedicated worktable to make art. In any case, my artistic motivation had dried up with the pandemic. I still relished the company of books and doing nerdy research on the British Colonial Administration’s impact on the peoples, land, and resources of Nigeria for future artwork. While hours spent perfecting Boolean search terms on Jstor and rare book sites may not sound exciting, that attention to minutiae may have been the only thing that kept me sane. The Little Green Cottage did not get much sunlight through its small, square windows, so the dreary winter days in Oregon were challenging indeed. A natural night owl, I rose late and worked/watched Netflix late. Out of sync with the rhythm of the US workday and nine hours behind my family in the cities they call home, my days lacked the acquired rhythm that my recent jobs as a professor had given to it.

Even as some lockdown rules started to ease, as an immunocompromised person, I did not venture outside much and spent most of my time worrying for myself and about family on two continents. Though Eugene doesn’t have a very robust public transportation system, to begin with, most bus routes were shut down, and as the roads were reclaimed by cars, I sometimes envied the drivers that freedom. I longed to visit the coast and hike the mossy path through the woods that leads to the ever-welcome surprise of Crescent Beach. In town, I really wanted to attend Nkame, the retrospective show of Afro-Cuban artist Belkis Ayon at the Jordan Schnitzer Museum of Art on the University of Oregon Campus, and bask in the massive scale and life-giving energy of a Black woman’s dedication to printmaking as a fine craft. As it was, the most entertainment to be found was a few short blocks away from the cottage at a strip mall that contained a grocery store, a coffee shop, and other establishments. I tried to keep trips to the grocery store to a minimum and to buy only what would fit in my small refrigerator. These outings usually featured the most people I would see at any given time, faces (thankfully) covered in masks and minds attuned to the task at hand; I was often both glad to see evidence of life and acutely aware of what even the briefest of interactions could cost me. Seeing other humans in this way, as unwitting vectors of potential doom, was really hard to take.

Finally, this July I left the safety of the Little Green Cottage, and I am now grateful to be with chosen family in their Portland home, another temporary berth in a storm that has upended so many lives. I worked through my experiences of the past year with a counselor, who told me to consider that part of the ennui I am suffering is because I have yet to grieve for the professional opportunities I lost to the pandemic. While that rings true, it also feels selfish to grieve such things considering the unyielding weight of lost human lives we continue to witness. Especially when that grief is weighed against my gratitude that my own family members, spread around the world as we were, were spared. Eventually, on the other side of this crucible, we must all find a way to grieve the losses — our own and those of others — without letting the survivor’s guilt kill us.

While reflecting on my experiences earlier in the pandemic, I recalled some of the lyrics to “Alone Again (Naturally),” a rather mournful Gilbert O’Sullivan song from which this essay takes its title, a title that kept coming to mind on those long, solitary days. While that seemed appropriate for the depths of isolation and sorrow that colored the end of last year, now I think instead of these matter-of-fact words by bell hooks; “At times home is nowhere. At times one only knows extreme estrangement and alienation. Then home is no longer just one place. It is locations.” This quote best explains my current feelings about a question I keep getting as I now cast a wide net across the country in my search for work. “Where would you like to be?” The answer remains, “I don’t know.” But I do know this: I look forward to being able to choose my next dwelling, one in which I can spread out, tend to plant babies, make dinner for friends, and in which my introvert’s heart can also recharge from the exertions of peopling too much. Alone because I want to be. Alone but not lonely, naturally.