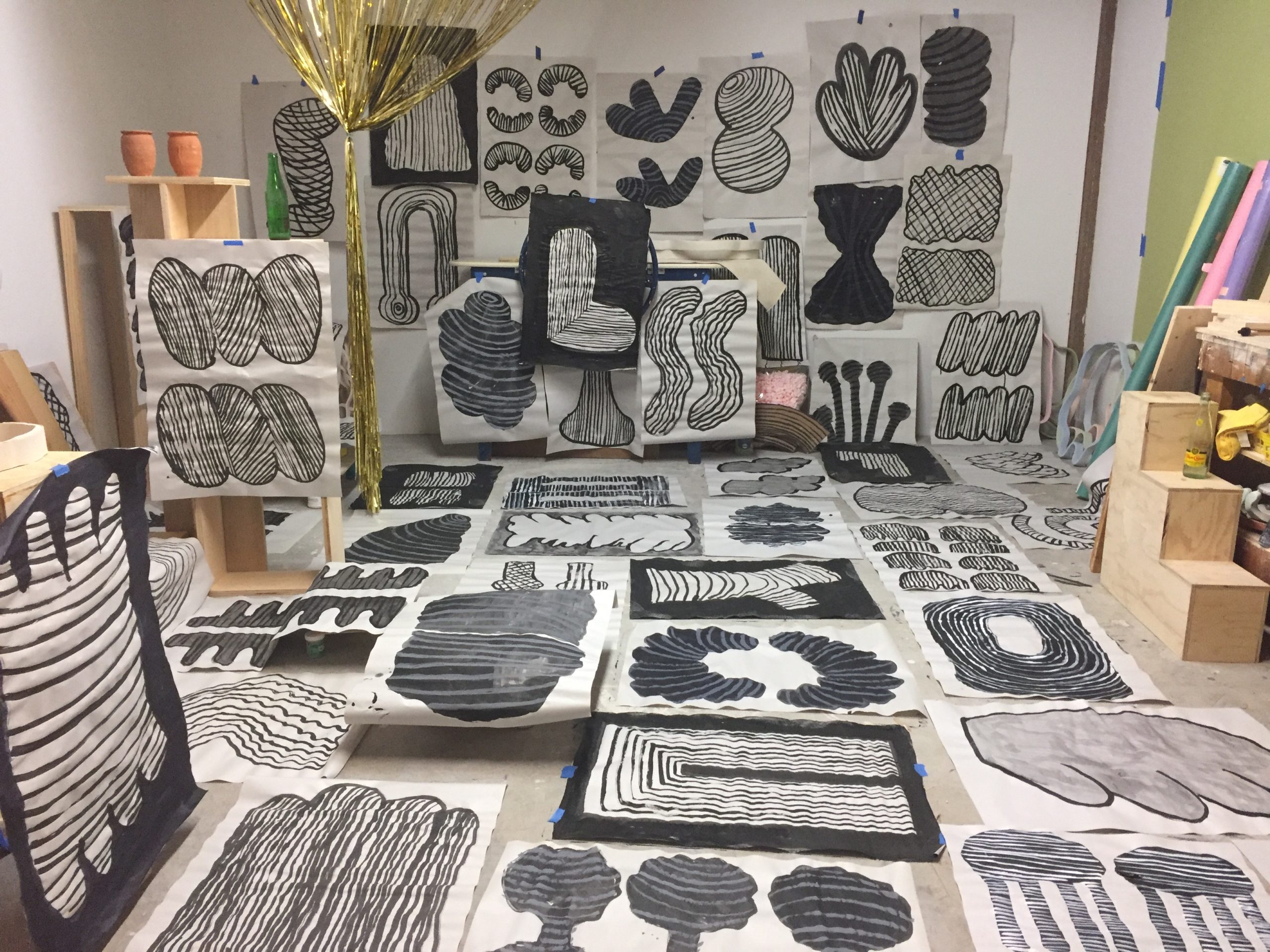 Image of the author’s studio filled with ink drawings during the shutdown era of the pandemic in 2020.

At the end of an exhausting day working in a beige cubicle, I use the energy I have left to make the fifty-one-mile drive from Stockton to my studio in Sacramento. After three years of doing this, I’ve stopped listening to music and podcasts, instead driving in silence. Sitting with my thoughts while anxiously driving up and down “the five” allows me to explore my feelings about being a working artist and curator attempting to thrive in an unwelcoming environment. I have been feeling disconnected from Sacramento and Stockton’s art scene for some time now, but June 2020 was particularly difficult. Grieving the death of my great-aunt, the cyclical deaths of Black people and unmet cries for justice, and the loss of in-person interactions with friends and colleagues made me feel like my universe was collapsing. A year and a half later, I’m still making the same drive, contemplating the things that have yet to change.

My early experiences in the art world have been eye-opening. After finishing undergrad at UC Davis in 2013, I was underemployed and frantically looking for work in a creative industry, hoping it would lead to studio space. Stockton, where I was raised and still live, didn’t have studio spaces, let alone an art scene I felt I could participate in. I sought validity from my mentors, and also from artists who were locally established, so when a former professor asked if I were interested in being an artist assistant for her friend who worked in painting and sculpture in Sacramento, I said yes. Working in this studio, I felt like the butt of a joke. I rarely engaged with any people of color, and I dealt with microaggressions from the artist and her friends. Once, as I was accompanying her to a solo show at Elliott Fouts Gallery, she asked me if she looked “hood” enough in her baggy pants and chain-link accessories. Another time, I was serving snacks to a group of white women in her studio, and one of them commented, “You’re so small, I want to put you in my bag.” In that environment, I didn’t see anyone who looked like me, nor anyone significant to me in my upbringing — brown, working class, immigrant — and I felt like I didn’t belong or wasn’t sufficient enough to participate as an “artist.” My tenure as an assistant ended with not getting paid for more than a year of work; instead, the artist presented me with one of her paintings. Until I talked to friends who were assistants in New York, I didn’t even realize assistants were meant to get paid.

Similar to hazing, I felt that these experiences were normal at the time; I also naïvely believed that all creative institutions advocated for artists in good faith, and I misjudged their intentions without any critical thought. 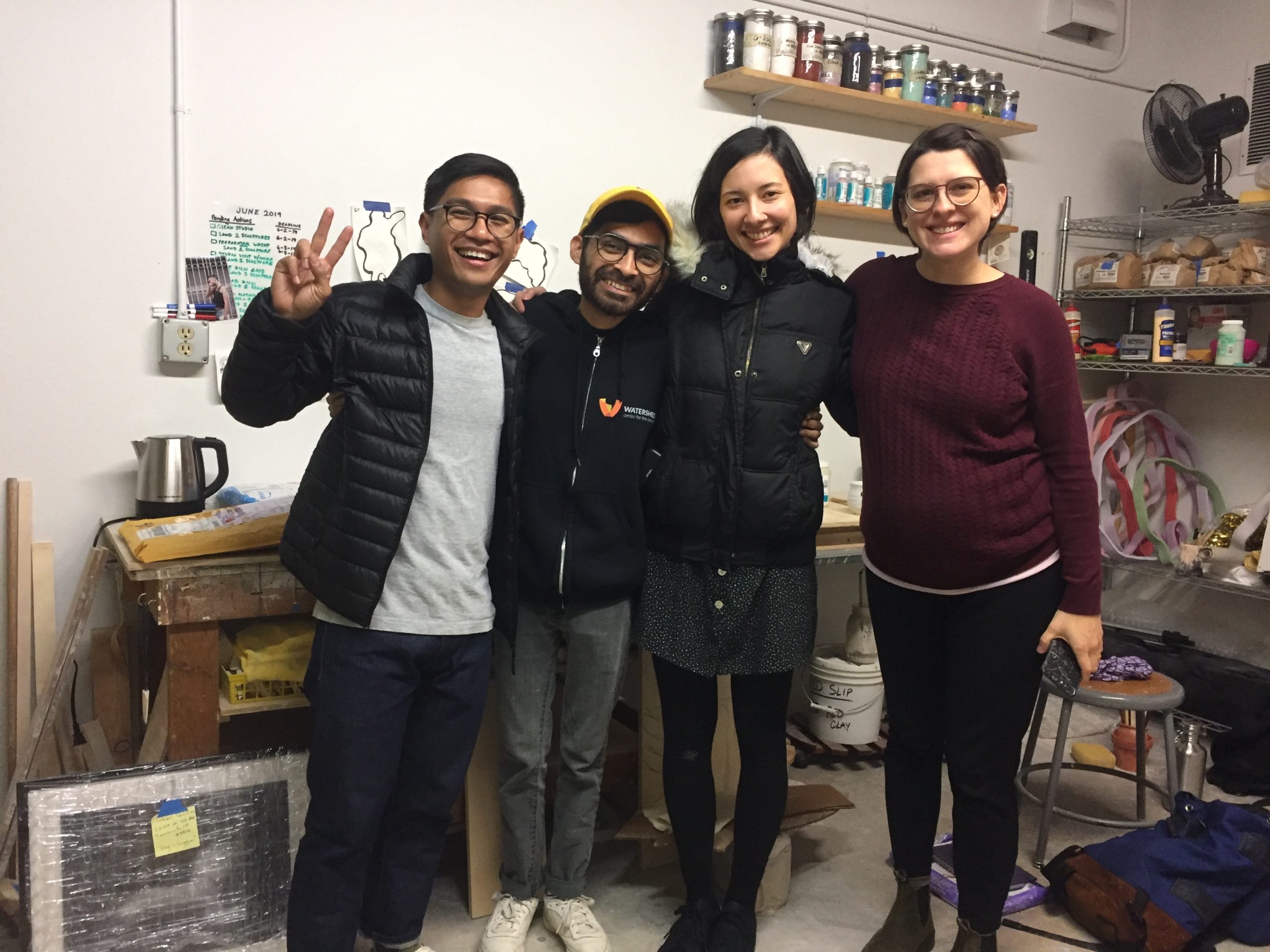 I still find myself seeking validation from more established artists, specifically artists of color. I wonder if their experiences of obtaining prominence mirrored mine to a degree. The noticeable weight of racism has affected various parts of my career in the arts. Since 2016, I’ve had studio space at Verge Center for the Arts, a leading cultural institution for contemporary art in Sacramento. Until recently, the staff consisted mostly of white women, so when Verge established a residency with the Ali Youssefi Project (or AYP, named after a late Sacramentan who wanted to elevate community to connect artists beyond Sacramento), I was skeptical about their sincerity when it came to helping people of color. Perhaps it was a trauma response from my experiences of interacting with toxic white feminists who weren’t as interested in dismantling patriarchal and racist systems as they were hellbent on obtaining power equivalent to white men. When Verge started the AYP project in 2019, and I sat on the selection panel for the first round. It was a diverse group, ranging in age, race, and gender identity. However, the following panel was very different — and very white. I thought a lot about how people of color are routinely forced to rely on white people to make decisions about their lives, and how important representation is to every process. I am frequently aware that I have to minimize myself, to be deferential toward white people who have the power to determine the direction of my still-developing career. And I am aware that I hold a kind of power, too: I can be tokenized, used for credibility or cover, referred to as a “Hispanic gay man” and held up as proof when white institutions want to discuss their contributions to diversity and cultural equity. I didn’t think much about it the first few years I was working professionally — how organizations can exploit BIPOC to meet specific criteria for their year-end goals, performatively making space for artists of color. Now I wonder: If they don’t use me, or cite me (or people like me), will this hurt their chances for getting more of what they already have?

Often the burden of educating others falls on non-white people. Independent curator Faith McKinnie and I have sat on panels together — Faith is one of the few Black cultural leaders in Sacramento, and after the meetings we spend time reflecting on our experiences. The most draining of these was when we reviewed more than two hundred applications and discussed them with two other panelists. The facilitator mentioned during our first meeting that she would not recognize they/them pronouns because she found them confusing. It took up much of our time and energy to explain why excluding an entire community is harmful and her comment inappropriate. We had to escalate to her supervisor, which lead to apologies that felt empty. Problems like these are systemic, but they are intensified in a smaller cultural arts hub because of the lack of spaces and communal support. 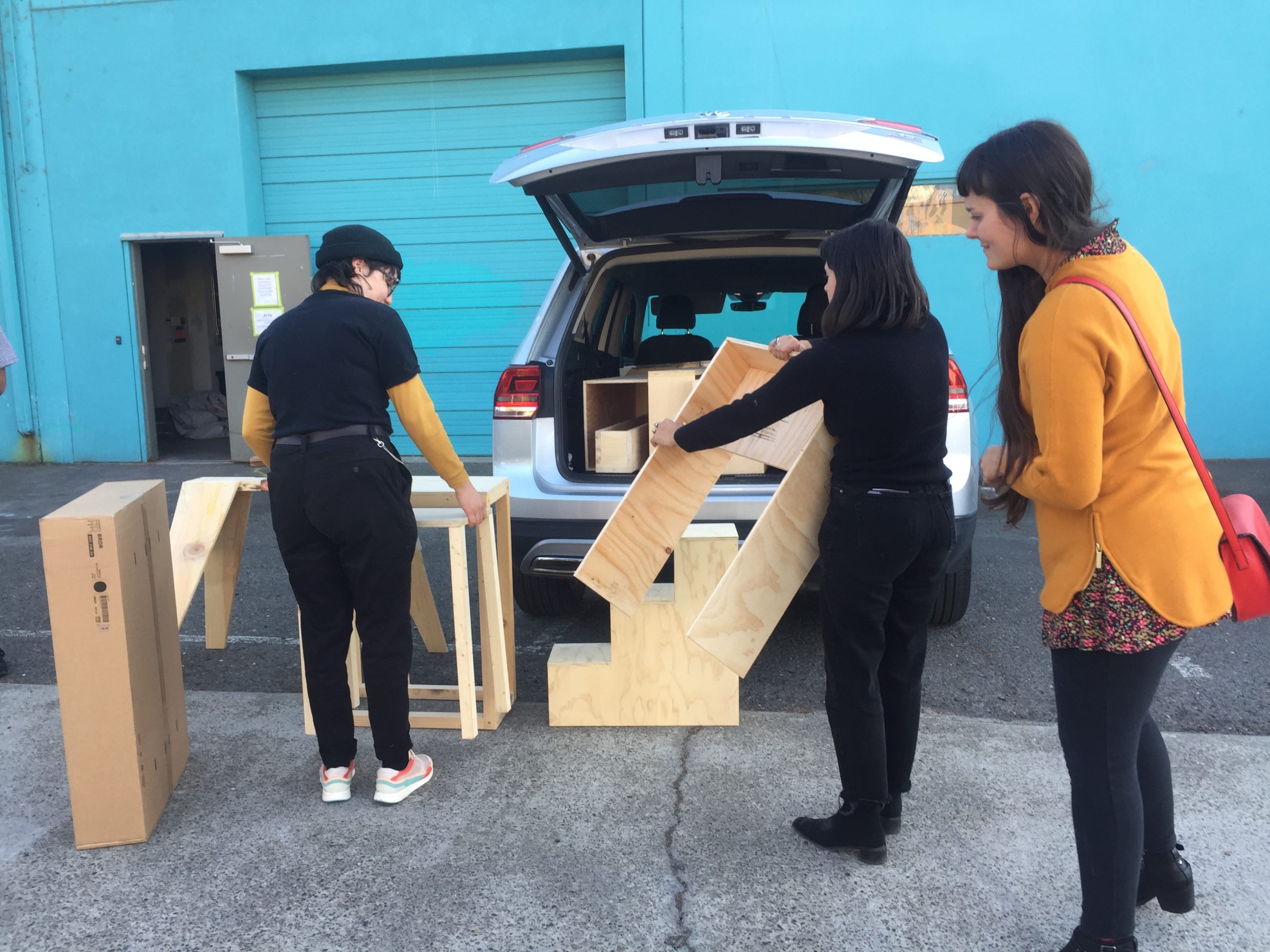 After these unwelcoming encounters, ensuring adequate representation and making meaningful attempts to uplift marginalized artists became my ongoing goals. Sacramento has a “locals only” mindset that keeps galleries recycling the same artists (mostly white, mostly men), leaving hardly any opportunities for others; it hasn’t changed much after 2020. I counter by curating local artists and artists outside of the region into shows in Sacramento and beyond, but this is a very difficult task because of the paucity of venues. In 2017, the artist Natalye Valentina and I co-founded Unibrow Collective to cultivate and broaden conversations about art practices in the Central Valley. Our first curatorial event was Sacramento Zine Fest. In 2020, Unibrow Collective organized a group of six local artists to produce work for QiPO, a satellite art fair in Mexico City. While there, I received an e-mail from The Holland Project, an arts initiative based in Reno, Nevada, inviting me to curate a show for spring 2020 (because of governmental mandates and shutdowns, the exhibition wasn’t installed until April 2021). The Holland Project offered what Sacramento lacked: a sincere effort to provide space and logistical support to exhibit the work of marginalized artists. 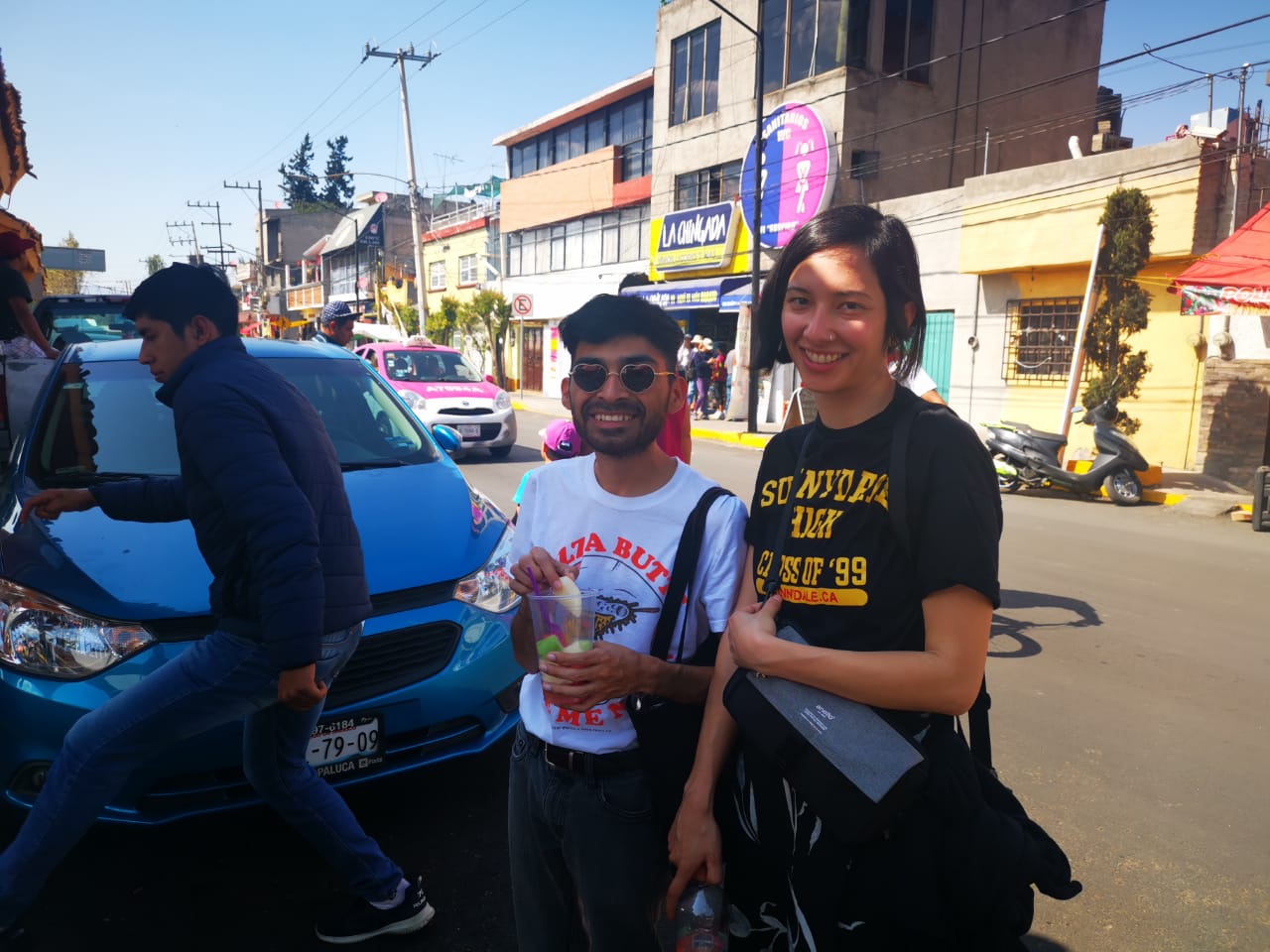 The delusion held by some artists and most local organizations that Sacramento is a hot spot for contemporary art is detrimental to the actual development of an art scene, because it implies that we already have the resources needed to thrive. We don’t, and to pretend otherwise does a disservice to artists. We need thoughtful and constructive critiques within art circles without the fear of hurting feelings, and we need conversations that contextualize non-white work within contemporary discourse. There is no static framework for initiating these discussions; it is important for artists to be responsible, to practice articulating their ideas and engaging in cultural politics. Most importantly, emergent artists and curators need financial support, space, and mentorship so they can continue to refine their practices. This is something we all must work toward. I believe that self-discipline and accountability are key traits in building a healthy creative community.

Although we have a large number of artists in Sacramento, sometimes it doesn’t feel like they have the ability to actually speak out and ask for more. I don’t think silence resolves anything — for me, it can only lead to a toll on my emotional wellbeing that ends in burnout. I need to be heard, to be a part of an art scene that cares. Artists who don’t have this support often end up leaving for larger metropolitan cities to find sustenance and community. Someday I hope to feel less disconnected. Eventually, my fifty-one-mile drive to my studio will end.

I would like to specifically thank Julia Blandon, Erik Garcia, Cristóbal Martinez, Rolando Sepulveda II, Emily Smoller, Susanna Tu, and Natalye Valentina for their warmth and ability to be real with me.