Speaking Together: Poetry Exercises in Anti-Ableism

by Poetry Collaborations with Creative Growth 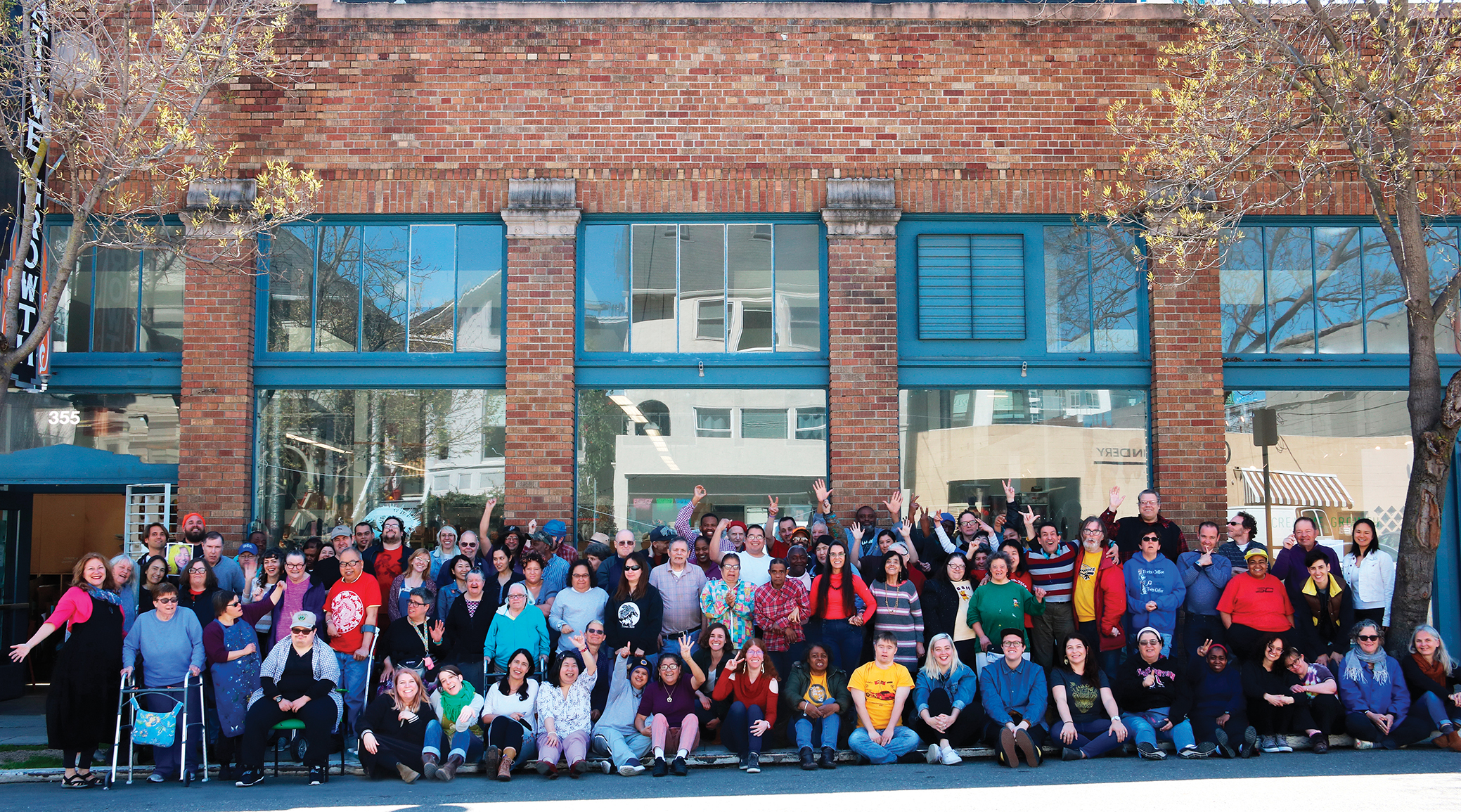 The documentary Crip Camp: A Disability Revolution has many profound moments (if you haven’t yet seen it, rush to your nearest screen!), but there is one scene which has stuck with me. Camp Jenedians sit around a table trading views and experiences involving their parents. One of the campers, Nancy Rosenblum, speaks at length, with great effort, and everyone listens. This moment is important because we so seldom see or experience it – a large group taking pains to hear the perspective of everyone, no matter how “difficult” it might be to understand them. I put the word in quotes because it is clearly only difficult for some interlocutors to understand Nancy. Her friend, Steve Hofmann, is able to convey her meaning to the filmmaker quite easily. Disability rights activist and former Jened camper Judy Heumann puts it this way: “We didn’t want to sideline anybody. We wanted to hear what everybody had to say. We were willing to listen.” The word radical gets thrown around a lot these days, sometimes at the risk of becoming a cliché. This really is an act of radical listening — one we must all learn from.

Anyone only slightly versed in conversations around accessibility will probably understand, say, the need for someone in a wheelchair to be able to attend a movie or concert without physical barriers. More complex (and I’m now departing somewhat from the main issues dealt with in Crip Cramp) are the ways in which inclusion and accessibility play out in cognitive realms. Our very notions of cognition are expressed hierarchically — within conversations about cognitive or developmental disability we might refer to someone as being “higher” or “lower” functioning than someone else. If someone can’t follow the same train of logic, grasp the same concepts or store the same information as another person, some of us unthinkingly assume inferiority; too often, the assumption is they have nothing valuable to contribute.

This is cognitive ableism at its worst. Organizations like the Creative Growth Art Center are crucial for changing attitudes toward people with cognitive and developmental disabilities. The artists working within such institutions are given space and time to explore, and viewers are given the opportunity to understand how much there is to learn from their singular visions.

I’ve long been an admirer and collector of the innovative, beautiful, strange, complex, and delightful artworks from Creative Growth. I thought the artists there would also make exceptional poets. In 2019, Studio Special Projects Coordinator Kathleen Henderson invited me to be Creative Growth’s first Poet-in-Residence. I host workshops in which I read poetry aloud and we discuss what we think of it. Sometimes these poems are models for our own (an early example, which was published in our first chapbook The Poem Is Telling Me I Remember (Slacks Books), was our take on Joe Brainard’s I Remember). To allow everyone to participate, regardless of their reading or writing skills, we create our poems collaboratively, the facilitator recording lines as participants call them out. This gem was composed with Syd Staiti, one of several guests I’ve invited to the workshop:

Are walking down the road
Walking down memory lane
“Sometimes when I play my guitar I feel like a neophyte,”
Said Ced to Syd
I sing a poem
Let yourself go alone

Syd provided the first line and our group (Todd Blair, Heather Edgar, Jorge Gomez, Gail Lewis, Julie S., and Nicole Storm) came up with the rest. Everyone got a kick out of adding Syd to our poem as a character, along with the artist and poet Cedric Johnson, an old friend we hadn’t been able to see since the shutdown. It might seem odd that our list of contributors is longer than their poem. Because we compose collaboratively, each participant in the workshop is credited. The energy and flow of the whole group is what produced the work, after all. (And sometimes, as you’ll see with Todd Blair’s haiku below, individuals will compose work on their own.)

From the beginning of the poetry program at Creative Growth I was interested in involving poets I knew and respected (and since the pandemic forced us onto Zoom, I’ve been able to cast a much wider geographic net). Kostas Anagnopoulos was an early guest who has since moved on to hosting his own workshop. Kyle Schlesinger has been a regular visitor since early 2020. I’ve benefitted immensely from their ideas, knowledge, and enthusiasm. Together we collaborated on prompts or exercises that might inspire people. The Creative Growth poets loved meeting and working with them.

I began to notice how we always assumed that Kostas or Kyle or any other guest would be fellow-facilitator with me, rather than fellow-poet with Creative Growth poets. I pondered the assumptions that informed this automatic stance. To be fair, every guest we’ve had is usually so delighted to witness our collaborative process that they hesitate to take up any room with their poetic contributions. But this hesitation, I felt, was also a tacit unconscious acknowledgement of difference that, perhaps, wasn’t always necessary. In fact, it was limiting. For in trying not to emphasize difference in an offensive way we were flattening difference in an unproductive way.

Creative collaboration can be a magical experience. For the isolated toiler, it’s a welcome relief. I find I worry my words less, I am more spontaneous and have more fun. It can also be a test of our egos, our rigidity about intention; you can’t care too much about trying to say your piece if you’re working with others. It’s an exercise in openness and paying attention. Group collaborations at Creative Growth are like big poetry writing parties. We make each other laugh and we are inspired by each other — but not always! We interrupt each other, we forget to listen. We worry that our idea was forgotten. We don’t like the direction a poem is taking… if you’ve worked with others, this probably sounds familiar. And so it seemed to me that the automatic deference our guests paid to the Creative Growth poets wasn’t really serving the process. Why couldn’t Kyle or Syd (or me for that matter) arrive in class and participate as an equal?

I wrestled with this question for a long time, and I think my conundrum came down to this: I should assume equality between participants, but as in any workshop I still needed to structure the connections between poets in such a way that they would be supported in their differences. I have been speaking about the Creative Growth poets as a monolith and of course they are not. Larry Randolph is interested in/inspired by and responds to different content than Gail Lewis or Todd Blair. They in turn approach poetry composition differently than Kyle Schlesinger. I wanted to make sure that everyone felt engaged and excited to participate.

Initially I created all manner of (often tortured) exercises that might encourage equal exchange. I am embarrassed to say it took quite a while for me realize that all we have to do is encourage visiting poets to speak up when the spirit moves them. Kyle came up with the structure for one of these collaborations (a short poem consisting of title and one line) and we were off and running:

PRINCE IN THE GROCERY STORE AT MIDNIGHT
Where am I

KOSTAS IN HIS SHOP AT 5 O’CLOCK
A cuckoo bird

CINDERELLA IN WONDERLAND AT 10:30
A knock at the door

DOLLY PARTON, A VACATION TO THE BEACH IN BRAZIL, 1870
Where’s the cavalry?

DOLLY PARTON DOING THE CANCAN, 9 TO 5
Not likely

BARTHOLOMEW AT DENNY’S, 1980
Fruit salad is a person and French toast

A particularly exciting session was when Creative Growth staff (who don’t necessarily view themselves as poets) were inspired to join as well. On this day we were working on loose haikus (like many twentieth century poets before us, we dispensed with worrying about counting syllables).

Kathleen butt-dialed me at 11pm
What’s next?
Queen’s gambit

The Creative Growth poets are a veritable font of ideas; I have learned so much from their work (and I think Kostas and Kyle have as well). I approach my own writing with more humor, more joie de vivre and freedom. I remember to be sincere but not to take myself or anything else too seriously. In this spirit of exchange, I thought it would be fun for them to think of assignments we could give to poets (you, perhaps?) we hadn’t met yet. To that end, we invite you to try out the following…

Write a poem using any of these titles/first lines:


If you are happy with your results, please send them to me so I may share them in class. (You may write me at lorraine[at]creativegrowth.org).