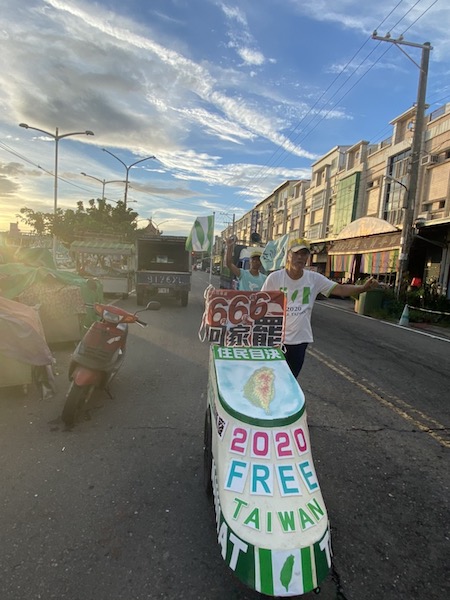 Photo courtesy of the author.

My father, an activist for Taiwan independence, often says that being unable to determine your own fate is like living with a gun to your head. Sovereignty is abstract and Taiwan can be a complicated story, but it can also be simple: the first presidential campaign was held in 1993 and in 2020, independence is still unrealized. Taiwan can never escape the Chinese lens by which the world views it. The New York Times recently started to include in its reporting on Taiwan that the country was never ruled by China, but every time I read about the island country, I still flash back to the foreign policy classes at college in upstate New York many years ago, when professors insisted Taiwan was the annoyance that convoluted the democratic (read Western) world’s engagement with a marketizing China.

My father would rather confront the threat than accommodate its looming nature. Now in retirement, he spends his time protesting: weekly street church services, periodic hunger strikes, and every few years, a one-man march around the perimeter of the island, pushing a hand cart with “Free Taiwan” painted in loud colors. His insistent occupation of public space with a political message is radical for people so persecuted that their organizing has long been conducted overseas. Taiwanese students taking advantage of visas to study in the US during the 1970s and ‘80s were exposed to new ways of understanding politics and their own history; on foreign campuses, they learned that oppression by your government could be a matter of circumstance, not a given. Still, their government was good at reaching beyond its borders. After being blacklisted from returning to Taiwan, my father secured a teaching position at Syracuse University, and continued to organize. Growing up, my sister and I would often wake to a living room full of slumbering bodies in sleeping bags: Taiwanese graduate students who crashed at our house after their strategy discussions went late into the night.

I imagine what it’s like not only to accept the looming threat, but to have internalized the fact that living normally in the face of a threat could actually get you killed. You can’t walk down the street. Report a stolen bike. Talk on the phone. When we visited relatives in Taiwan during my fourth grade year, my parents wouldn’t let us out of their sight because they knew we didn’t know the unofficial code of conduct that developed under military law. Criticizing the government in public back then, even in jest, could mean a visit by the police. Ten years ago, when I worked in bike and pedestrian advocacy, I would visit reverends who ran an urban farm and food pantry in Brooklyn. They shared my frustration about our weekly meetings with a philanthropy-funded coalition promoting active living and healthy food, knowing that they could never really speak their mind at those excruciating sessions. At their farm out by Ralph Avenue, the reverends would vent about “active living,” reminding me, do you know what a Black man running down the street looks like? They would point out that NYPD’s portable panopticon was permanently parked in front of the high school next to the farm.

On February 28, 1947, an elder Taiwanese woman went out to a street in Kaohsiung to sell cigarettes. This was a fraught time on the island; the Nationalists fleeing civil war in China had seized land and property and governmental control of Taiwan, aided by the US Navy as an anti-Communist maneuver. The woman was killed by a soldier who tried to stop her from vending under the auspices of new laws meant to control activity in public space. When people protested, Chinese soldiers committed “unimaginable atrocities” to suppress demonstrations — the words of John Powell, editor of China Weekly and a rare US witness.

My father eventually returned to Taiwan to dive into political work while my sister and I stayed in Syracuse to finish school. Visiting my parents a few years ago, we detoured from sightseeing and drove through some industrial zones amid farm fields to a small village, really a group of houses among the dense patches of land that connected the sprawling cities. We were warmly welcomed by a large family I was meeting for the first time; they set out their best tea and a large spread of fruit and sweets. During our afternoon with them, stories about their family started to spill over to family members long gone, including tales of cruelty at the hands of Chinese soldiers. As we piled into the car to leave, I saw some of them wipe tears away; only now I realize that being able to tell their story and experience acceptance of what they endured is what made them cry.