“The picture frame starts to melt and extrude itself toward us, it starts to burn our clothing. This is not what we paid 12 bucks to see when we entered the art gallery. Human art, in the face of this melting glass screen, is in no sense public relations […] Art has to be a part of the glass itself.”

The Cow Palace, where Chip Lord, Doug Michels, and Curtis Schreier rammed a customized Cadillac through a wall of forty burning television sets, got its name from a disparaging reporter. When it was decided in 1933 that the California State Livestock Pavilion would be refurbished with public funds, depression still raging, a journalist asked, “Why…should money be spent on a ‘palace for cows’?” By the time the pavilion served as the site of Lord, Michels, and Schreier’s performance, the once-provocative name had become calcified in history.

Language is pinned to context but images happen over and over again, as what they capture is reanimated with each viewing. Steve Seid’s new book from Inventory Press and Rite Editions, Media Burn: Ant Farm and The Making of an Image, explores the engineering of an image as a kind of performance, one based on the lossy collision of two flaming US icons. 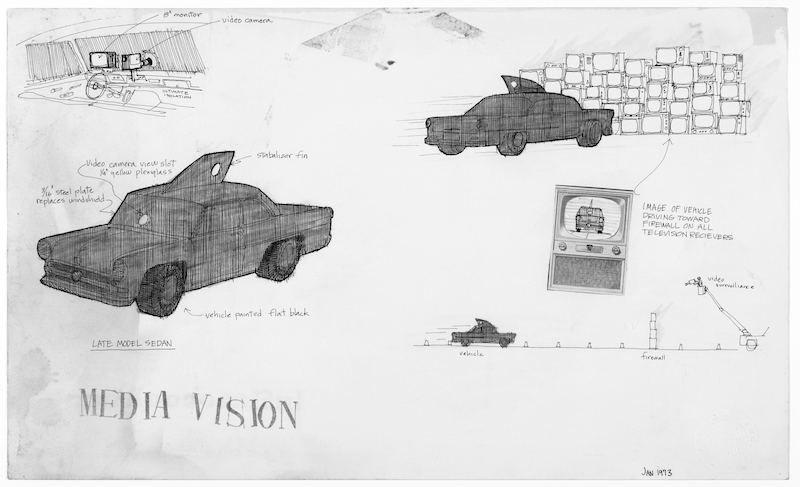 The earliest conception drawing of what would become Media Burn, here titled Media Vision in 1973. Notice that this version called for functional television sets, reproducing the image of the onrushing car. Drawing by Doug Michels. From the Ant Farm Archive, housed at the Berkeley Art Museum and Pacific Film Archive.

Michels’s first teaching assignment at Catholic University in Washington, D.C., was terminated by administrators, who found his stated design goal of “chaos” unacceptable. In 1968 he drove west in a banged-up Cadillac, loosely bound for the Bay Area. There, he would meet Schreier and Lord, who had come to Berkeley to participate in collaborative architectural workshops run by Lawrence and Anna Halprin.

I left the Bay Area, my only home — conditional as that word is — a couple months ago. Squinting back at it from a few hundred miles, I see it’s always symbolized a kind of idealism for me. A place for active people who want to make and do active politics.

In 1968, Lord and Michels started their collaborative project Ant Farm (Schreier officially joined in 1970, followed by Hudson Marquez). As boyish iconoclasts and self-proclaimed underground architects, there was no way they would be about making buildings. Structures of any sort seemed limited. Encounters, new types of public confrontations — that interested them.

For Cadillac Ranch, situated in a stretch of dirt near Amarillo, Texas, Ant Farm planted ten vintage Cadillacs face down in the soil. Inspired by the effect of debasing the car, a symbol of US capitalism, the collective turned its attention to the television.

In the ‘70s, Seid notes, it seemed like the TV was everywhere, and always on. Responding to this sudden atmospheric presence of images, primarily filtered through corporate and governmental messaging, Ant Farm set out to make an image of its own — one from the resistance. To destroy TV, the artists reasoned, one must make TV. 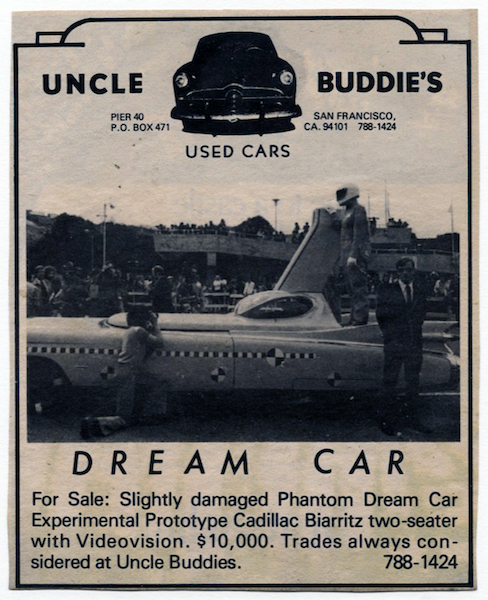 An advertisement for the sale of the Phantom Dream Car. “Uncle Buddie,” the quintessential used car salesman, was an Ant Farm character often performed by Chip Lord. From the Ant Farm Archive, housed at the Berkeley Art Museum and Pacific Film Archive.

For good measure — in case the idea of constructing an image was too subtle — they resolved for that image to be one of retributive violence against the television itself. In a kind of public guillotining, they would light forty or so television sets on fire and kill them with exactly the kind of fantastical image peddled in concurrent advertisements: a customized 1959 Cadillac, which Schreier would trick out to become a “Phantom Dream Car.”

Media Burn took place on the Fourth of July in 1975. Before the Phantom Dream Car took off, Ant Farm held an Independence Day celebration, complete with presidential address. Artist Doug Hall gestured through a cut-up speech borrowed from Democratic presidential nominee George McGovern, ending with, “Now I ask, my fellow Americans, haven’t you ever wanted to put your foot through your television screen.” 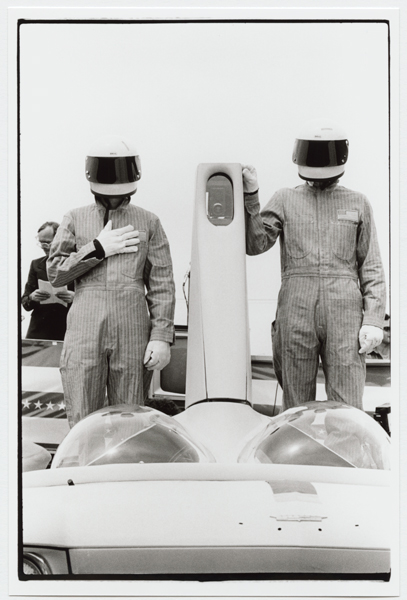 The Artist-Dummies, Curtis Schreier and Doug Michels, standing astride the tail-fin of the Phantom Dream Car as “The Star Spangled Banner” is played. Photograph by Diane Andrews Hall. From the Ant Farm Archive, housed at the Berkeley Art Museum and Pacific Film Archive.

The performance had its Artist-President, and it also had its Artist-Dummies, Michels and Schreier, who patriotically set themselves on a collision course toward the wall of blank analog television screens reflecting their own ephemerality. The Artist-Dummies later reported that they first felt the car’s impact with the televisions, and then caught a strong waft of kerosene. After the Phantom Dream Car bust through the wall, four hundred spectators rushed forward to further demolish the smoldering cabinets and cathode-rays. Screaming and cajoling, they reveled in the muck of eroding Americana. Destroying rather than improving. Destroying as improving?

In Oakland, when people left the shelter of their homes to protest the police murder of George Floyd during the ongoing pandemic, fireworks exploded over clotted tear gas. Someone I went to high school with asked me to help set a dumpster on fire, but I didn’t respond quickly enough, and they ran off. I saw the blaze and smelled burning plastic a few minutes later. My sister went off to pee beneath the big tree on Oscar Grant Plaza; while she was gone I heard safety glass crumbling, a crinkled, enchanted sound, caught up in the tension of a structure just about to collapse. A small fire bloomed in the CVS. Black smoke trickled out of the shattered window as coordinated members of the protest threw water bottles and baking soda (for the tear gas) into the crowd. And potato chips. Demolition employed as a statement of disillusionment. 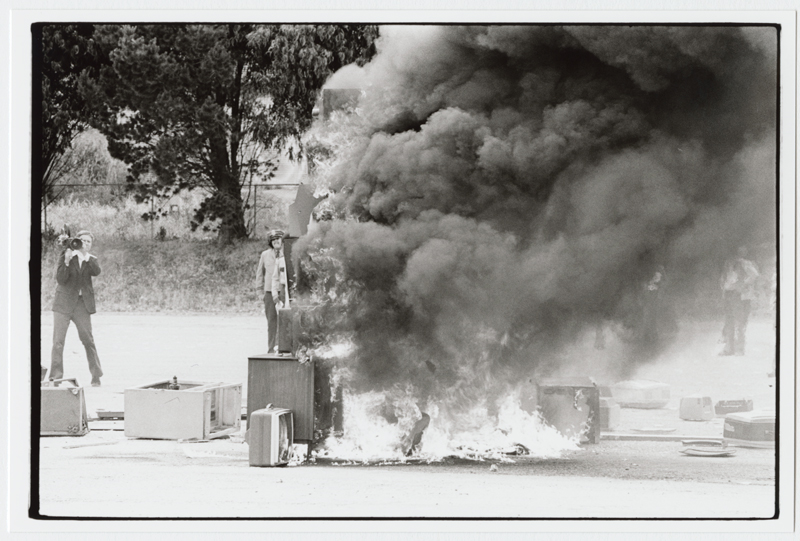 The iconic image of Media Burn captures a performance of amalgamation; the borders of television screens and Cadillac are temporarily congealed as a single molten architecture. Demolished sludge trails the image; after the cathartic explosion came a rotting pile of analog television, and a car turned art-object that Ant Farm only managed to sell years later.

At the close of Seid’s book he considers that revisiting Media Burn in 2020 might be an act of nostalgia. With the omnipresence of content in the digital age, which slips from screen to screen like an airborne disease, the notion of punching a foot through mass-media is thrilling. Ramming a car through a wall of televisions, Seid says, allows us to “enjoy the bravado of those mid-seventies ‘media matadors’ as they suit up to assault their arch-nemesis, the mass-media.” The thought is that this hero/enemy dualism is no longer possible in the present, where we face, “the atomized adversary of the internet of everything.”

Media Burn was made back when the world still felt like a world for us to move through — when systems of informatic control were tangible and one could more-or-less breathe the air and drink the water. It was made in a past when fire could still be ventriloquized as a provocation, before San Francisco regularly prepared to be enmeshed in lung-searing ash. Now assaults against enemies by presidents, dummies, and artists alike are undercut by the world’s increasing retreat from human influence — melted, burned, toxic, submerged, digitized.

I only got around to reading Timothy Morton’s Hyperobjects during lock-down. His text, which explores ecology and philosophy through the thematic concept of the “hyperobject” (an entity too large to see or contain that permeates boundaries with a sort of vacuous, sticky, multi-phased omnipresence) feels related to the spatial concerns Ant Farm’s radical design practice set out to address. 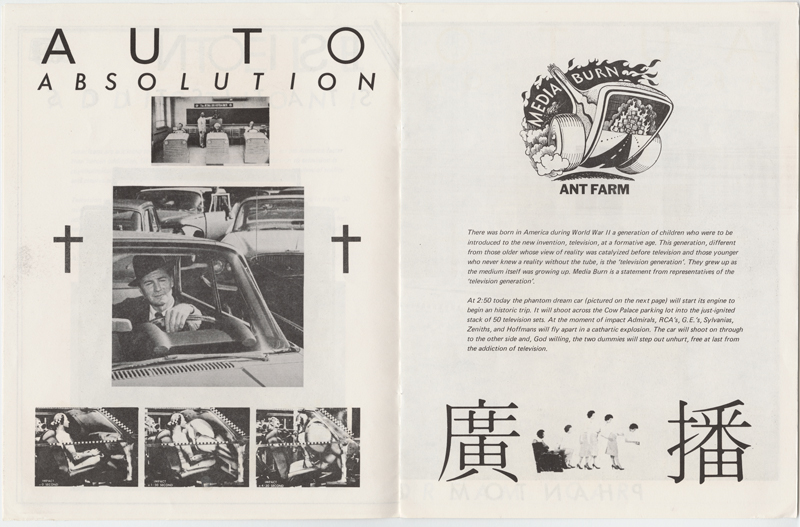 Two pages excerpted from the twelve page Media Burn souvenir brochure, sold for $1 at the July 4th performance. Notice the crash dummy photographs on the left side. This was the origin of the Artist-Dummy concept. The souvenir brochure contained television addiction statistics, a feedback card, and the entire text of the Artist-President speech. From the Ant Farm Archive, housed at the Berkeley Art Museum and Pacific Film Archive.

(It’s hard for me to remember that Ant Farm was an architecture firm. Their decision to counter capital’s IV-drip of fabricated images with performance and demolition makes it difficult to imagine that contemporaneous groups were choosing buildings or, worse, public pavilions as their tools of resistance.)

Morton has a critique for contemporary eco-friendly architecture. He feels that design goals which attempt to purify buildings with green architecture misunderstand a spatial relationship to hyperobjects such as global warming: “[ecological] architecture and design are predicated on the notion of “away.” But there is no ‘away’ after the end of the world.”

He suggests, instead, an architecture which visualizes the pulsating forces that touch all components of daily life, rather than hiding them “away” from public consciousness. Ant Farm did exactly this. The architects felt the effect of television on their bodies, and so performed, for an audience, the release of captivated attention which they conjectured was demanded by television. They killed the apparatus which sheltered filament ideologies and was still perceived as a separate entity from the atomized “everything” of today.

But still, the problem of “away” persists. The addictive qualities of television, the passive consumption it pipes into the home, did just fine set free from analog form. One could offer a sad re-reading of the victorious image engineered by Ant Farm: by destroying television’s body, they opened a cage door, releasing the seeping omnipresence of the attention economy. Like everything in our closed atmosphere, the ash from Media Burn’s fire isn’t going anywhere. 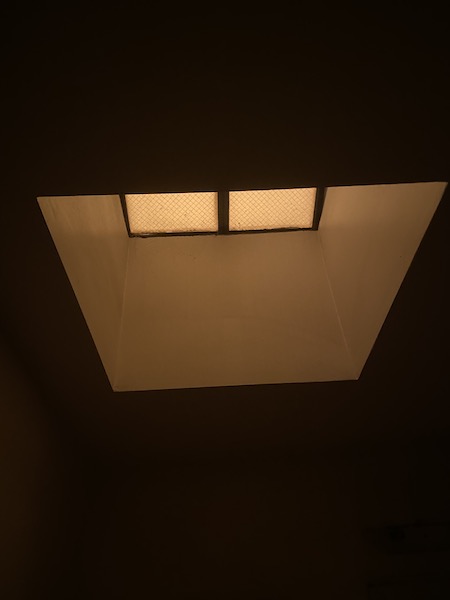 A month or two after the protests died down, the Bay Area woke to a deep orange sky. The sun, which had been a brittle purple for weeks, looked particularly ominous. Still, I couldn’t resist reading outside. Ash settled on my cheeks and arms while a friend six feet away talked incessantly about how he could convince his neighbor to have sex with him. His texts to the neighbor get increasingly frantic — pleading. Does anyone have any chill anymore? I don’t. 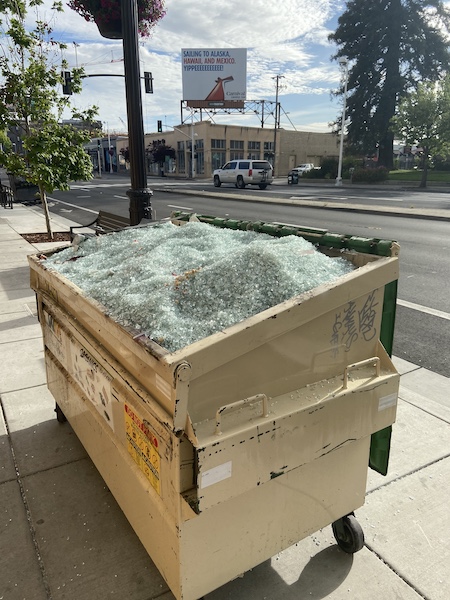 Dusted in ash, not for the first time this year, I wondered what a less active, less productive iteration of Media Burn would look like. One that positioned itself not as a force of destruction but as a conduit for already existing destruction, as a meditation on decay.

I guess I want to know what mourning, rather than killing, the parts of my body that have become inseparable from the television, from the internet, from particle fallout caused by wildfires ignited in part by PG&E’s attempts to expand electric reach — what would that look like?