Series Six Degrees of Separation
Six Degrees of Separation
Series
Organized by The Editors
What makes sense to publish in these times? We wanted to avoid “this is the new reality” hot takes responding to the COVID-19 pandemic. And but also… there is this new reality to contend with (layered on all those old realities, of course). How are artists and writers in the Bay Area doing that contending? Here are a few local perspectives — including our own contribution, a resources page we compiled last month, with help from SFMOMA colleagues and Open Space community members. 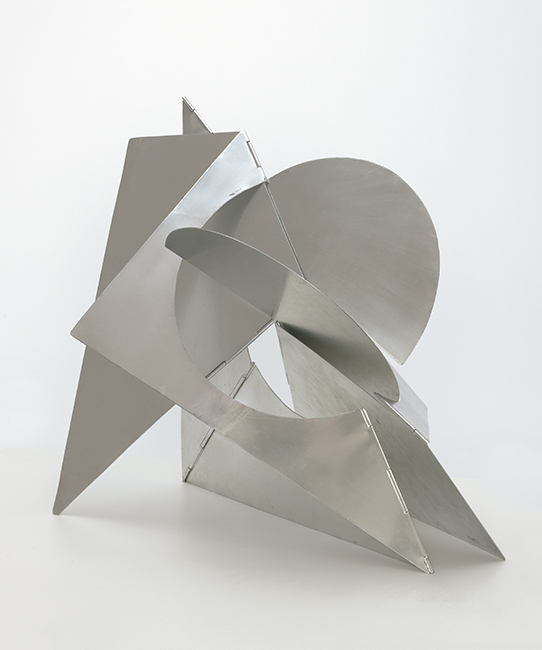 “A type of body-to-body relationship between two living organisms.” Thus did Lygia Clark describe a series of sculptures she created between 1960 and 1966. The bodies belong to, one: a person and, two: a Bicho.

The Bichos are intended to be handled. Their polished aluminum plates are inter-articulated by hinges that decide and comply with the myriad manifestations of a given corporeal dialogue. A participant moves a plane, and the Bicho offers a rejoinder.

Read now, Clark’s words feel like a tease or a taunt. Sensory projection would always have been necessary to write about this work, as I decided to do before the coronavirus siege began; despite what I might wish, SFMOMA curators can’t (and wouldn’t) play with the museum’s art objects for the fun of it. But it is acutely so now that I am housebound, as you likely are, while Bicho Pássaro de Espaço sits starved for company in the museum’s second-floor Botta galleries.

The Bicho’s sharp edges and shifting planes are always only as good as what they offer, what they do. Clark used Modernist geometric abstraction to reject the pictorial plane altogether; the capricious Bicho can never be just an image — it materializes its own instructions for use. As both object and activity, it relates to contemporaneous performance practices coming out of the Fluxus movement and influenced by John Cage — work by George Brecht, Nam June Paik, Alison Knowles, Allan Kaprow — art as event resulting from written directions or “scores.” Yet unlike those works, where variability lies only in the execution, the extent and consistency of the Bicho’s instructions are unknown. There is no set sequence of movements; rather, the Bicho’s score is rewritten with every new interaction. It is a proposition: always on the verge of becoming. And, crucially, it is not language-based. “Bicho” in Portuguese means “beast, or non-human animal,” also “bug”; the title of Clark’s series is most commonly translated into English as “critter.” The work, then, is what exists between this creature and its interlocutor, continually formed anew as an unpredictable material negotiation. As such, it embodies that “mad, mad harmony” sought by Clarice Lispector (another Brazilian, just two months younger than Clark, writing in Rio at the same time Clark developed her Bichos). Lispector wrote in Água Viva: “The secret harmony of disharmony: I don’t want something already made but something still being tortuously made.” 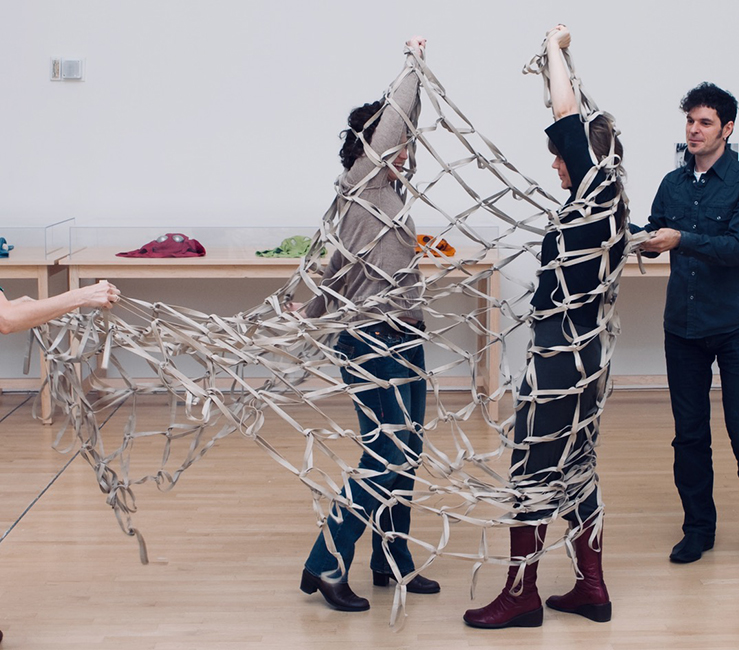 So, when we can’t interact physically with the Bicho, an imaginary interaction (a haptic daydream) is not just the desperate interpretive tack of someone longing for contact outside of her domestic space — it is a requirement of the work. Clark created agents of material proposition with her Bicho series; the interactive objects she subsequently made increasingly took on the role of mediator. She is a celebrated artist of the post-war period with several important retrospectives, yet it is rare to experience her work properly. Art like this is out of our system to some degree — a troublesome, radical thing. The physical touch the work demands remains a call most institutions will not answer. Within the US, Connie Butler and Luis Pérez-Oramas organized an interactive retrospective of Clark’s work at MoMA in 2014. And in 2008 — when I first encountered them — Rudolf Frieling, SFMOMA’s curator of media arts, included Clark’s participatory objects in the exhibition The Art of Participation: 1950 to Now. Exhibition copies of Diálogo: Óculos (Dialogue: Goggles), 1968, and Rede de elástico (Elastic Net), 1973, facilitated intimate, uncomfortable, funny exchanges between visitors. I remember the disorientation and closeness of the goggles — a set of mirrors distorting my vision as I searched for eye contact with a similarly destabilized partner across our shared appendage. Time dilates, sound shifts, and relationship is foregrounded, making clear our porousness to others and the world around us. A net made of knotted rubber bands added over time by visitors, Rede de elástico is more openly collective (collectively formed as it actively forms a collective): the number of participants and how they choose to engage is limited only by personal preference. The final size, activity, shape, and use are contingent, indefinite. 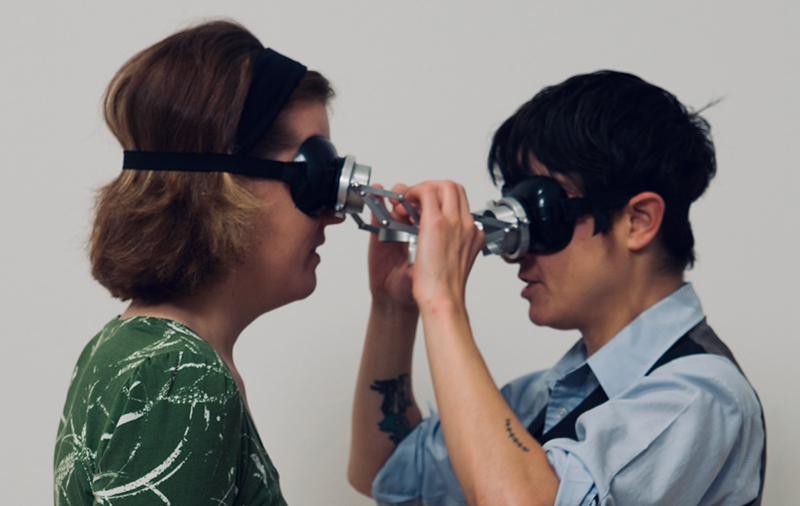 Clark’s facilitated exchanges and collective propositions ultimately led her to therapeutic work directed toward the specific needs of individuals. In many ways, this trajectory was anticipated by the Bicho series, and its embodiment of the condition Bruno Latour rehearsed in his essay, “The Berlin key or how to do words with things,” in which we must abandon the idea that “the subject is posed in its opposition to the object, for there are neither subjects nor objects.” Rather, the object (for Latour, the Berlin key; here, the Bicho) — or, more precisely, what the object can do physically — sets the terms for our engagement. Latour, again: “[the object] assumes all the dignity of a mediator, a social actor, an agent, an active being.” In 1960, the Bicho threw into question the very value of the autonomous art object. The resulting encounter today is just as critical: It is an exercise in attention and open responsiveness, of giving oneself over to a somatic game with an unknown outcome. For Clark, the Bicho is mediator as both means and end, leading the way to work that takes on an increasingly social and communal function. This first step of sensory communion promised by the Bicho (hinges rotating into place, the aluminum scraping and settling and asking a new question in return) seems like some antidote to this pandemic condition. A concrete exchange over time, unpredictable yet productive in and of itself: this is the most appealing daydream right now. 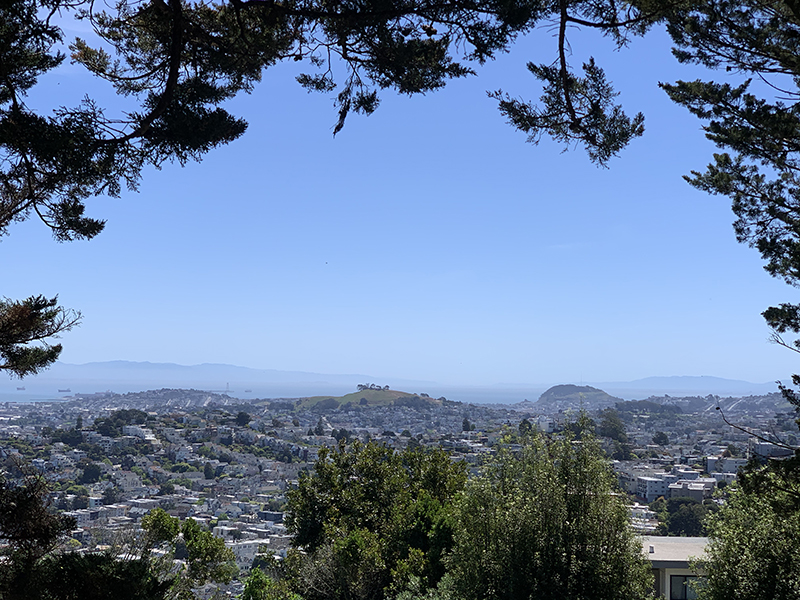 I’m in a ground-floor apartment in one of those few sweet, if grubby, Victorians still around in an increasingly moneyed San Francisco. The house is set into the hill such that “ground floor” is a dressed-up word for basement, but what it lacks in above-ground appeal, it makes up for in neighborhood glories. My daily sanity walks are to arresting vistas atop parks with names like Tank Hill, Corona Heights (if you can believe it), Mt. Olympus, Buena Vista Park. West of here are the avenues and, eventually, Ocean Beach — the whole area used to be windswept sand and costal scrub. The “Outside lands,” as it was known in the nineteenth century, was mostly developed by the mid-1900s after the City of San Francisco took possession of the land from the Federal Government in 1866 (who had claimed it from the Mexican government, who claimed it from the Ramaytush Ohlone). But how can one really beat back the dunes? I don’t mind the grains of sand that invariably pile in my entry way. I’m not worried about being overtaken by some possessed, roving dune. But I do picture, with increasing and unsettling regularity, the sand encroaching. I imagine it hazing up the air, causing me to squint, settling into every joint. I toy with the idea of blaming the sand for the grinding and halting thought processes that have replaced smooth connections between spinning gears. (If I’m honest, writing is usually like that, but more so now. “There’s sand in there, I’d bet on it,” I say to my dog.)

In this imagined reality, I worry about the Bicho. What will happen to all those beautiful joints, what Clark called the “spines” of the creature, when the sand sweeps in? Grains jamming its aluminum-to-aluminum contact points, causing the hinges to scrape and stick. Gummed up gears would compromise the vigor and generosity of the Bicho, whose radical physical reciprocity seems a particularly essential thing to protect.

So I’ll imagine a sand-free Bicho Pássaro de Espaçio and some sympathetic, unhurried exchange, letting it mediate in absentia a moment of profound insecurity, physical, and social risk. I had asked Rudolf Frieling about his experience with Clark’s work and he brought up his good fortune of having a small Bicho at his home, a little matte black creature made of hard plastic. He kindly offered to send a photo, and better, he sent five — documents of an unfolding interaction all the more necessary, and now slightly easier, to conjure: a pleasure of uncertainty, of play. Trial and error; no anxiety.