A Chance to Do It All Better Again

Long before coronavirus, I had an essay kicking around in my mind about how museum closures reveal essential aspects of an institution’s identity. Building and other infrastructural shutdowns in recent years at MoMA and the Whitney in New York and SFMOMA in San Francisco (among others) recall pivotal historical episodes and, for me, spark visions of people dancing through empty hallways, keeping lonely artworks company in the absence of crowds. These fantasies feel like a guilty pleasure in the current crisis: so many people who make up the beating hearts of museums are furloughed or laid off, with little indication of when (or if) they will return. Lessons are coming in fast and hard about culture workers and their roles in “the economy”; we’ve also been made to question the essence of public institutions and who or what they serve, as well as the fragility and strength of human bodies, the dangers and pleasures of physical proximity, and on and on. Perhaps then it is even more timely to ask what becomes of museums when they are closed, disassembled, unable to meet their audiences in a dedicated and imposing building. How do art institutions dance when no one seems to be watching? And when the cat’s away, which mice come out to play?

After hours at the Los Angeles County Museum of Art (LACMA) in 1966, dancers took over a loading dock, waded through the museum’s reflecting pools, and charged down the median of the street in front of it. With broad access to LACMA’s brand-new (and disliked) buildings — which fans are now mourning as demolition is underway — the performers exposed how art museums are stages for encounters just as much as they are storehouses for physical things. The dance events also revealed conflicts built in to LACMA’s structure as an institution, which continue to play out to this day and are put into particular relief by its current building project. In Minneapolis, the Walker Art Center’s multi-disciplinary and civic-minded orientation came out in full force between 1969 and 1971 when its original building was torn down; borrowing French art theorist André Malraux’s term, it became a “museum without walls,” focused on education and live programming. While a guest in theaters, schools, and other spaces around town, the Walker worked through some of its roles and responsibilities as a multi-arts center with respect to its home city, prefiguring its recent reckoning as inheritor and agent of a permanent settler colony. This work, shared by most art institutions, will always be ongoing.

The 2002–04 closure of MoMA’s Manhattan building was just one of several instances in which the institution consolidated its corporate identity in order to pursue a larger physical and discursive footprint. In the late 1970s, MoMA quietly discontinued experimental performance and contemporary art programs in order to make way for a(nother) Picasso exhibition and a glass tower by César Pelli; these programs engaged living artists and younger, more diverse audiences, and had been initiated partly in response to the artist and worker strikes in the late 1960s and early 1970s that demanded attention to who and what the art institution was for. Once the pressure was off and finances were good, previously subversive impulses were assimilated into the institution and MoMA continued its upward and outward march. Referring to the closure during MoMA’s 2019 expansion, an employee recently remarked that without people in the galleries it was hard to connect to MoMA’s real purpose. Silently I wondered if the closed buildings made MoMA’s real purpose stand out even more starkly: for a few months, employees took the subway day after day to an office job like any other, riding the elevators up and down a midtown building to administrate one of the largest art bureaucracies in the world.

For its big renovation in 2013–16, SFMOMA initiated off-site programming and exhibitions like the Walker did decades ago, becoming “SFMOMA On the Go.” But its activities online made the San Francisco museum resemble Malraux’s musée imaginaire more closely than the Walker did. The “museum without walls,” an ideal, endlessly re-combinatory collection, was prefigured in Malraux’s own time by the proliferation of photography and art books, but may have achieved its full expression on the internet, where artworks can be shared and compared without the limits of time and space. 1 With SFMOMA’s physical closure, its active virtual life offered a venue for the kind of reflection Malraux envisioned, as well as wholesale reconsiderations of the museum framework. grupa o.k. pointed out in these pages that the question of an institution’s closure “opens immediately onto others: what exactly do we take a ‘museum’ to be? Is it the building, the people who work there, the collection, the audience, or some aggregate of all of these?” Open Space’s editors responded a few years later with the provocation that there are precious occasions when “the museum exists as a hypothetical space, a space that can best be accessed through the virtual, and the imagination.”

If we take our current state of suspended animation as one of these occasions, what can we see in art institutions now that we can’t when it’s business as usual? There’s the performance of it all: of wealth, stability, and permanence — and there’s the intimacy, the real charge of being up close and in person with an artwork we’re meeting for the first time or as an old and beloved friend. There’s “bad” behavior and “good,” on the part of the institution, its artists, and its publics — and the chance to do it all better again. What do the big empty buildings invite when they are dark? How can we fill them with real hope and possibility? I’ve caught glimpses of such an effort in exhibitions that paid as much attention to what’s offstage at the museum as what’s on. I heard it in podcaster Nate DiMeo’s audio project for the Met, when he provided histories for the makers and objects not enough people notice. And I felt it in the rehearsals for DESIRE LINES: RETROFIT at SFMOMA, when the dancers took over the hallways and galleries to work out the intricacies of communication and cooperation, as well as disobedience. For a few stolen hours, they remade the institution as unruly and unexpected, exuberant and glorious. Just how I hope it will be when we can go back. 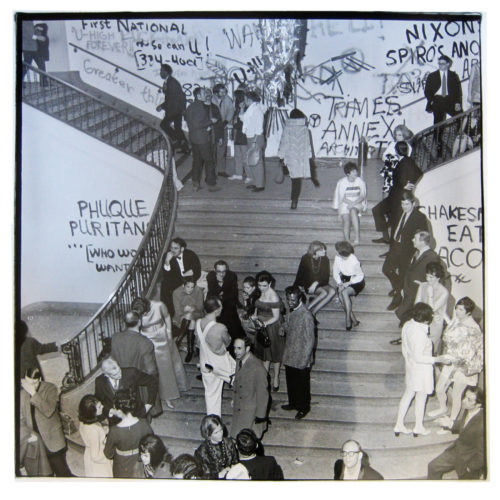