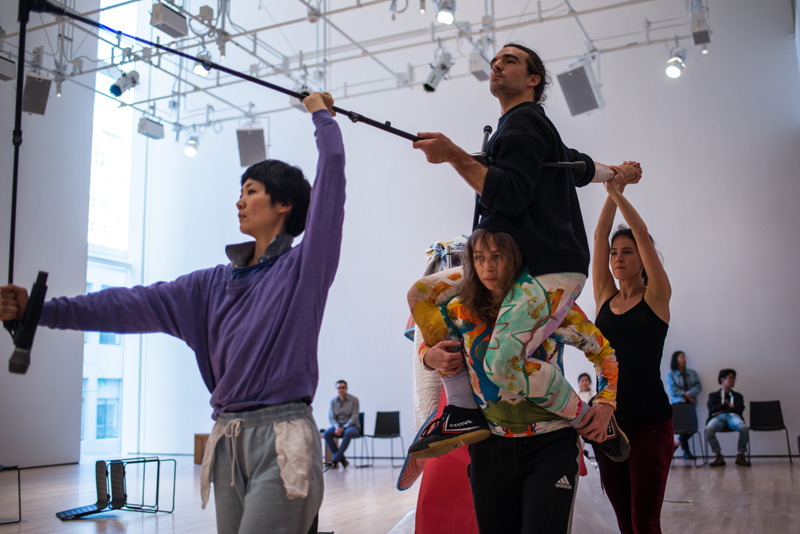 Mina is wrapped in red paper, a high-fashion garment that spills to the floor in a long train. Eleanor pushes against the underside of a railing with her foot, manipulating it like so many other things in the dance — chairs, rolling racks, clothes, a giant garbage can — and makes the museum’s architecture itself into a moveable object. Rashaun glides into view on a wheeled dolly; he is on his belly with arms and legs waving, his frictionless motion like a plastic bag picked up and batted around by the wind. Silas unrolls a long piece of vinyl, pulling it taut across the playing space. He agitates it, making vibrant waves while letting out an operatic yodel. Cori knows exactly what to do: she steps into the center of the waves and begins a phrase in a deep plié, the scene recalling at once the demanding balances of a Merce Cunningham production, Alvin Ailey’s signature choreography in Revelations, and the corny half-exposed stage devices employed by a Waiting for Guffman-esque send-up of community theater.

These momentary arrivals were also departures within the constantly cohering, dissipating, and re-forming DESIRE LINES: RETROFIT, an eighty-minute loop of structured dance improvisation conceived and directed by Rashaun Mitchell and Silas Riener, and performed and co-created with Eleanor Hullihan, Cori Kresge, and Mina Nishimura. As each cycle started, two dancers separated from the group, navigating SFMOMA’s galleries and interstitial spaces in an extemporaneous dance that responded to the surrounding architecture, artworks, and visitors. Their duet took them back to the Gina and Stuart Peterson White Box, where they joined the other three performers in creatively handling and mishandling a morphing collection of items drawn from the museum’s offices, basement, trash pile, and other institutional corners. The movement summoned and invented by the five dancers was at times metaphoric, at others dancerly, and still others quite quotidian, yet always utterly specific to how dancer, prop, and playing space encountered one another in each new instant — a central tenet of Mitchell and Riener’s evolving DESIRE LINES practice. Working their way through the SFMOMA piece’s score, the dancers built up and broke down their sets and props, brought in colored washes of light and loud bursts of music, and outlined a stage-within-a-stage; in doing so they articulated the borders between people, between subjects and objects, figure and ground, material and environment, acting out — in the theatrical and the Freudian senses — some of the porousness between these terms. With a Robert Rauschenberg exhibition right next door, the piece also created a Möbius strip of history, then joined to now and crisscrossed with shortcuts (desire lines?), picking up and finding new trajectories for some of the possibilities left behind by earlier experiments in dance, art, and museums. 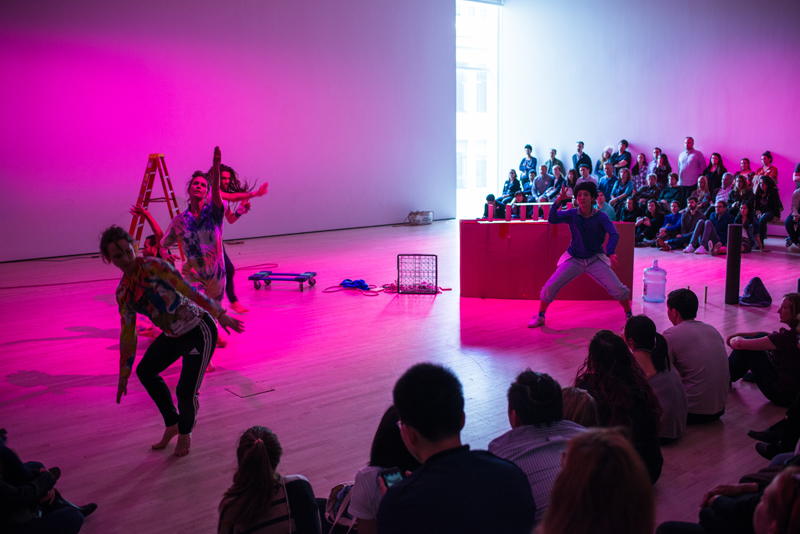 As individual dancers periodically emerged from an upstage door in multiple layers of clothes, they echoed how their ancestors in the Cunningham company selected costumes from a bag to put over their leotards in the 1963 work Story; legend has it that Barbara Dilley once put them all on at the same time and could barely move. 1 A solution for the demands of touring, Story, like DESIRE LINES, had modular parts that could be rearranged according to venue and occasion; Rauschenberg — the company’s visual designer from 1954–64 — put together a set and props on the spot at each new theater. 2 His costumes and décor for Cunningham had to that point frequently included everyday objects such as a chair, a fire hose, and a hand mirror, but this arrangement meant they had less to drag around with them on their 1963–64 American and world tours. Eventually Rauschenberg included himself on stage alongside the dancers, ironing a shirt or painting, for example — a development that reportedly made Cunningham “not thrilled with this level of action as it sometimes upstaged the dance.” 3

DESIRE LINES: RETROFIT imagined what would happen if this level of action was the dance, taking seriously the notion of a work choreographed by its own site, and giving the performers permission to cultivate their own fantasies for found materials, pushing further some of Rauschenberg’s (and Story’s) provocations. 4 A blue recycling bin served both as a costume and an impediment, thigh-high on a performer’s leg; a blown-up rubber glove became a fish at the end of a line, demanding a gleeful run. Engaged with the specific materiality of this museum, the performers revealed not just the continuity between elements in a landscape but also the reciprocal efforts of places and things to perform on their subjects: a heavy leather ottoman pushed back as a dancer strained against it, her bare feet slipping; the building’s large Evelyn and Walter Haas, Jr. Atrium reduced two performers to colorful wiggly specks.

Mitchell and Riener and company are the lucky inheritors of everything that happened after Story, in dance, museums, and contemporary art: from Cunningham’s first Museum Event in Vienna in 1964, a key landmark for dance in museums, to the development of collaborative practices in dance and theater in the 1960s and ’70s, to the recent rush of interest in performance by the art world. These developments created conditions for DESIRE LINES: RETROFIT to take place at SFMOMA, and the work’s particular fusion of form and content demonstrated ways history and influence are not abstract, but rather written on the body and transmitted by individual people.

Mitchell and Riener are most often labeled “former Cunningham dancers,” although the dance technique and performance experience gained through their years in the company live alongside and are jostled by other impulses. The movement world on view at SFMOMA was exotic and prosaic, shot through with classical ballet and Japanese butoh, karate and soccer and video games, as well as the tasks engendered by common objects, and plain old physical curiosity, all of which foregrounded the diversity of physical vocabulary within a single person and within a group. 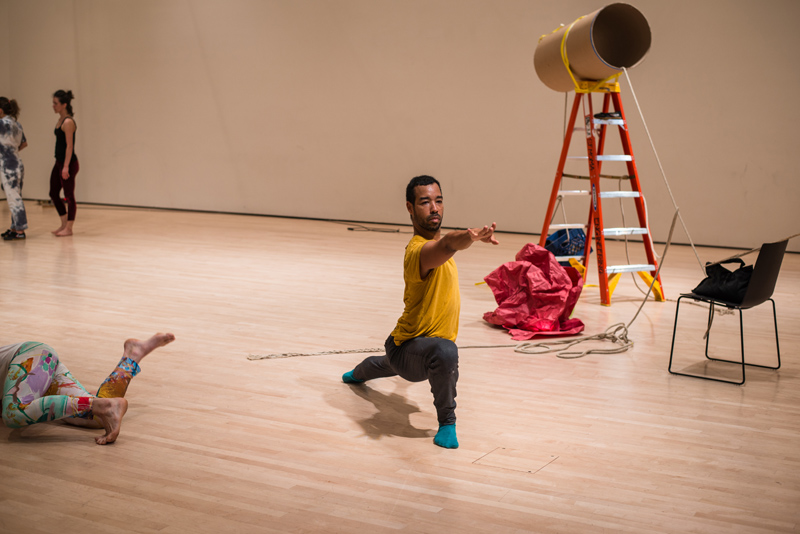 A direct path also runs between DESIRE LINES and the experiments of Bay Area choreographer Anna Halprin. Halprin and her husband, landscape architect Lawrence Halprin, conducted collaborative workshops between 1966 and 1971, focusing in particular on the co-constitutive relationship between people and a variety of environments: the beach, the forest, the city. Together with their students they invented habitats and movement patterns that were provisional but left behind the “RSVP Cycles,” an iterative scoring system that encompasses all parts of a situation, so that participants can analyze and make changes within that situation as it evolves. 5

Mitchell and Riener drew upon the RSVP Cycles and the Halprins’ interdisciplinary, context-driven ethos as they developed their own scores, rules, and evocative movement “modalities” to undergird the DESIRE LINES practice, which to date has included iterations in New York City, Marfa, and San Francisco. 6 Each new iteration, such as DESIRE LINES: RETROFIT at SFMOMA, contends with the precise circumstances of performers and place, while building on the approach to improvisation Mitchell and Riener are continuously refining with different groups of dancers, who draw on their own sources for movement and precedents for performance.

The Halprins emphasized how people organize place and space, and the appearance of Anna Halprin’s work at the then brand-new Berkeley Art Museum in 1970 asserted liveliness and contemporaneity as key values for the institution and the surrounding civic fabric. In New York the same year, Halprin’s student Yvonne Rainer exhibited her choreography in the galleries of the Whitney Museum of American Art, with her dance Continuous Project Altered Daily similarly implicating the museum as a producer of present-tense experience. Like DESIRE LINES, Rainer’s dance was playful, but employed a rigorous vocabulary that included physical prompts and choreographic “objects,” which performers could pick up and put down in the order of their choosing. 7 Continuous Project was part of a dialogue with process-based sculpture by artists such as Robert Morris and Richard Serra; Rainer pointedly responded to the labor implied by piles of debris, timbers, and lead by putting embodied effort on view in real time in the museum’s galleries, with all its gravity, messiness, and humor. 8 Rainer’s piece ultimately exceeded the museum and choreography as it was then understood: after the performances at the Whitney, it developed into the collective Grand Union (1970–76), which is widely regarded as an origin point for improvisational practices in contemporary dance. 9

DESIRE LINES: RETROFIT picked up threads from these earlier conversations while conscious about the ways dance, performance art, and institutional critique (and other forms) have shaped the contemporary art museum. But if its historical references and context make the work seem inevitable, I think overall the DESIRE LINES practice teaches us quite the opposite. Mitchell and Riener offer a management strategy for what at first feels pre-ordained, illustrating how people and objects and art and institutions are also events — always becoming — and revealing the labor, decision-making, beauty, boredom, and laughter involved in making anything. Their practice performs how history is never fully finished, and provides approaches for facing what appears inexorable: interrupt yourself, invest in your surroundings, help each other, and dance. 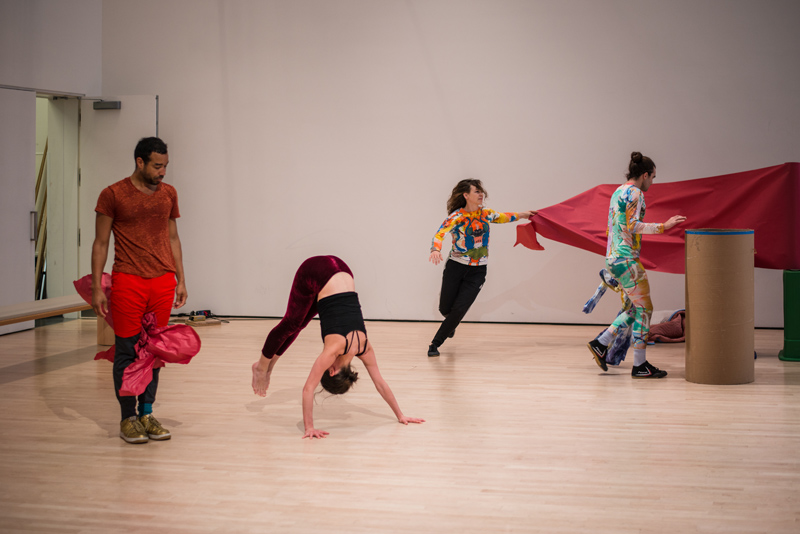 At SFMOMA, juggling the imperatives the artists created for themselves made DESIRE LINES: RETROFIT particularly inspired, and particularly precarious. It was constantly tacking between falling apart, fading out, falling over — literalized by perilous piles of materials — and sinking into something rote: getting stuck, falling asleep. (At a few points during each cycle, someone alone and backed up into a dead-end would call out “here” — plaintively, assertively, resignedly — and the others would come to the rescue.) As the dance neared the end of one loop, everyone started picking things up and moving them around, a madcap vision of tidying a house with no fixed furniture or walls. In one part of the playing space objects cohered: a ladder labeled SFMOMA ENGINEERING was piled with paper, plastic, tape, clothes, a hard hat, and laced through with rope. A dancer threw one end over the lighting grid above and pulled; the audience gasped a little when everything rose off the floor. He managed to keep it all aloft as the lights dimmed, the sculpture completely unexpected but exactly what this dance was building to.

DESIRE LINES re-approaches what it means to attend to the present moment, with its frictions, accidents, and unexpected narratives, and the burden (physical and figurative) of everything that’s accumulated to this point. As Mitchell and Riener refine their terms of engagement with others and the material world, they are inventing a set of tools for staying alive — in performance, and maybe beyond.