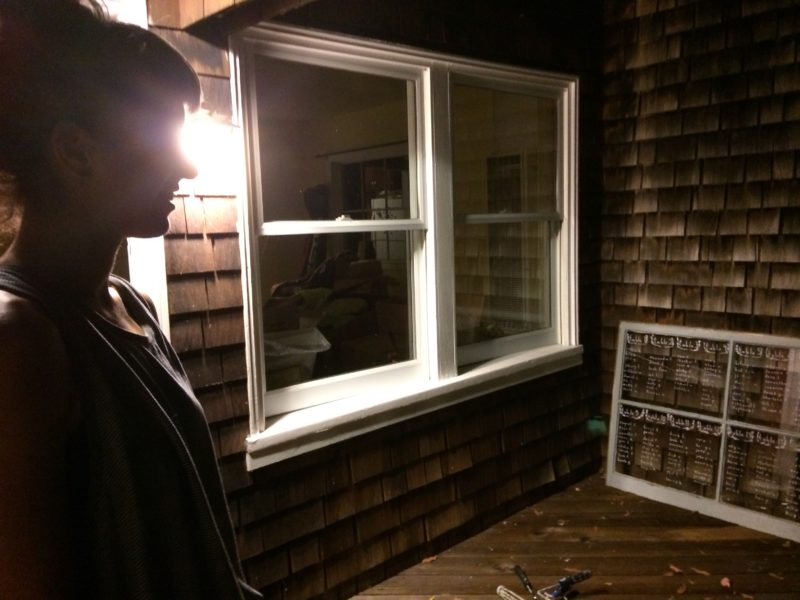 A shadowed outline of a person stands in front of the window of a weathered wooden-shingled building. Across from the person another window with white writing on it leans against the wall.

I’m notorious for hating goodbyes — I prefer to get it over with, to detach. Once, when a dear friend was moving away, I hugged her distractedly on the porch and rushed back inside, where I began to take photos of her through the window, photos I’d later post on Instagram. She looked up and shouted, “No phone! I’m here! Look at me! I’m still here!” She made me take pictures with her instead, and we laughed. I benefit from instructions at times like that. 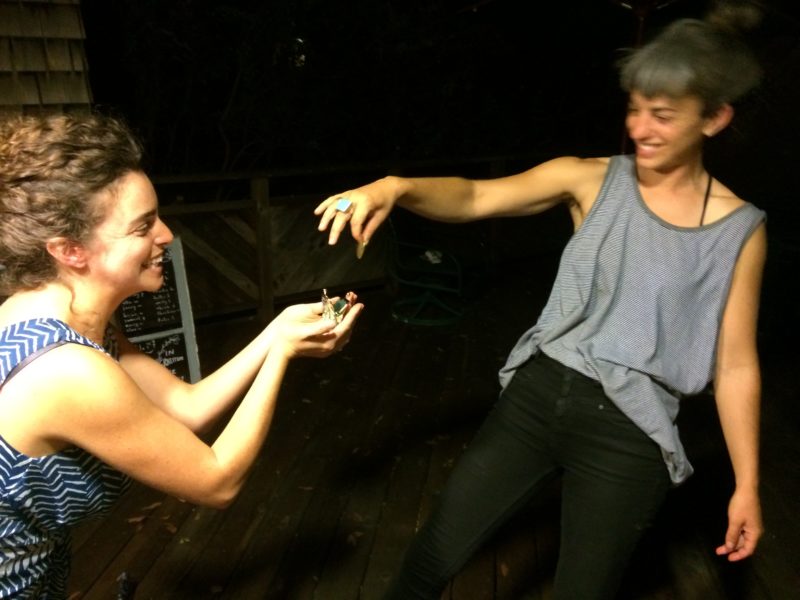 One person drops a small, unidentifiable object into the waiting hands of another person. Both people are smiling. It is dark in the background.

I thought of this friend at the start of Jess Curtis’s performance (in)Visible, which opens in total darkness. The performers are scattered through the space; one by one they calmly state, “I’m here.” Listening, I began to get a sense of their voices and their locations. My eyes were still pulsing a bit from the sudden transition to black, but I resisted the urge to turn my eyes toward each voice, I’m here, knowing I wouldn’t gain anything from looking. It felt intimate, and kind, like a friend guiding me into an experience I might not be equipped to handle.

I thought then of Harry Dodge, who writes in The River of the Mother of God: Notes on Indeterminacy, v. 2:

It was my second time seeing (in)Visible, but this time I was seeing it in something like home, in the city — or at least the metropolitan area — that I currently call home. I first saw the show when it premiered in Berlin, though I found out about it because many of the performers are based in the Bay Area. I’d been traveling almost two months, but the moment I joined the waiting crowd, I felt an immediate familiarity, particularly during the prelude around consent. Before we entered the theater, Curtis explained in detail that much of the performance takes place in darkness and that if we chose to sit in certain areas of the room we might be touched by the performers. “Tap three times if you need them to stop,” he said, “or just, ‘no thank you.’”

The concept of Curtis’s show is a dance performance that de-centers the visual; it is performed and informed by visually impaired artists. By limiting the amount of light available, introducing props that rustle and crinkle and whip as the performers interact with them, and involving the audience, Curtis asks us to experience through other senses and to notice — even monitor — our body’s reactions.

Bay Area artists often include an awareness of trauma in the spaces where they present or perform, from the consent talks at the beginning of Keith Hennessy’s de(composition) workshop to the way Sins Invalid offers educational workshops alongside performances. When I think about access-informed art-making, I think also of local artists like Jennifer Christine Williams who work professionally as therapists or healers of some kind, and whose work is influenced by expressive-arts therapy schools like that at San Francisco’s CIIS. I think too of art whose content and form engages directly with embodied experiences of such trauma, as in Amy Berkowitz’s Tender Points. These experiences are touchstones of a network I’ve lived inside for much of the last ten years, one that has taught me to expect a level of awareness of trauma that — I remember when I travel — I cannot assume in all arts spaces.

In the warnings Curtis gave before audience members entered the theater — what I’ve become used to calling “the consent talk” — he acknowledged that it’s risky to ask people to be in the dark and possibly receive an unexpected touch. Even though I am used to this language, I could feel the way my skin prickled when the body was named, when the possibility of trauma was named.

Such naming brings the realities of each individual audience member’s body into the room; it can feel formal, but it can also elevate the sensual. Recently I participated in a workshop on Pauline Oliveros’ Deep Listening led by the artist Steph Kudisch. Prior to beginning, Kudisch reminded us to pay attention to the needs of our bodies, and to feel free to move to be more comfortable. I stretched out on my belly and dug my fingernails into the dirty carpet beneath me, suddenly self-conscious, aware of my own flesh.

“No big deal if you need to leave,” Kudish said. I wondered about the standards of “need” here.

in(Visible) audience members were also reminded of the possibility of removing themselves. We were handed glowsticks as we walked into the theater; told that we could break them if we felt that we must leave in the middle of the performance. My friend Elisabeth called them “ejection devices” and there was this hovering feeling, that some danger might alight. I felt this not necessarily because of a specific history I have with trauma, but because of the belabored speech around it, the feeling throughout the performance that something intense is about to happen. I waited for it, braced for it. 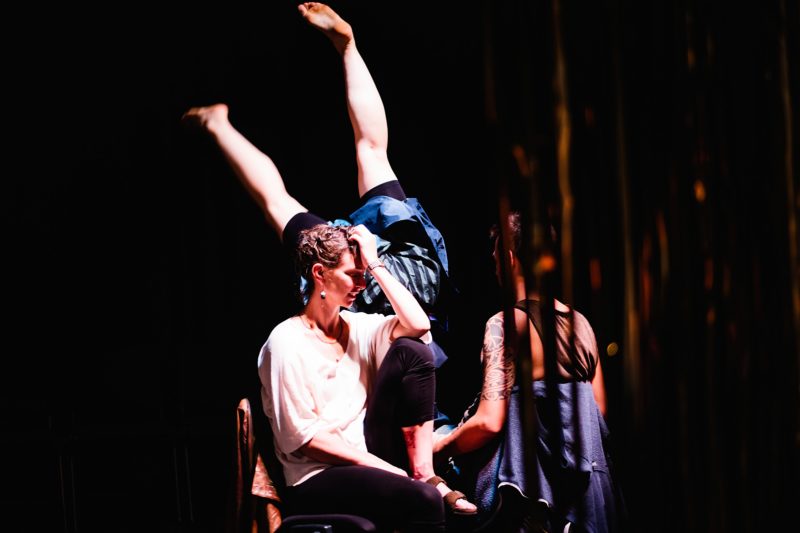 Against a dark background, Sophia Neises’ legs emerge into the air as she performs a shoulder stand between two audience members who are seated in the performance space of (in)Visible. In the foreground the metallic streamers of the set obscure the view slightly. Photo: www.hagolani.com.

In a way this is my primary experience of the show: expectation. After the performance in Berlin I talked with several audience members who said the consent talk was too much, that it made the work fall flat. If you’re going to talk that much about something that will happen, you have to really shock me, one said. I didn’t hear this reaction at the San Francisco performance, I think because we are more used to these instructions. But in addition to the pleasure and positive confusion I experienced while watching, I also experienced boredom. It’s a flavor of boredom I feel in other consent-heavy spaces, and not one I much mind, as it seems a necessary sacrifice for safer spaces. It confuses my sense of how to judge a performance, but perhaps it’s this confusion that an accessible space most presents and requires.

“But bafflement is an integral part of the pleasure and sometimes the comedy of the intimate, just as disbelief is a core affect of the political.” That’s Lauren Berlant and Lee Edelman in their collaborative book, Sex, or the Unbearable, in which they discuss the “unbearable” contradictions that arrive when an individual encounters the disintegration that sometimes results from physical intimacy. I move between spaces where consent is officially inscribed to spaces where it is not. With this movement comes a confusion, and in both directions. Yes, I feel unsure when I leave a space with specific rules, suddenly muddled about whether it’s okay to take off my shoes and lie on the floor after a dance workshop; when does the community agreement begin and end? But I also feel unsure when I move into the proscribed agreements themselves, as I watch a facilitator write “step up, step back” on a whiteboard or listen to a painter tell me to ask permission before applying paint to someone’s skin. I am confused as my body slowly adjusts to new invitations; it’s a body often performs as an able body, and so it’s not a part of my regular every-day experience to feel alienated by social rules.

What does it mean for art to be accessible? I think it is this choice: for alienation not to be immediately imposed upon a given set of people because of their specific abilities, but for alienation to be placed on view and offered as part of the experience. The disability justice performance project Sins Invalid centers disabled people of color, often framing their performances about sexuality, embodiment, and the disabled body with the idea that this work is “provocative” (according to their website) because it challenges “paradigms of “normal” and “sexy.” Discomfort from this “provocation” is named from the start. In relating to their own disability status in their multimedia work, Steph Kudisch re-writes inherited stories of monstrosity into new material, while Anna Landa’s recent Sight Unseen installations foreground non-normative experiences of sight and accompanying neurological function. Each of these projects works not just toward a simple visibility of the experience of the differently abled, but offers this experience to others as a possible way of approaching the world.

One of the most effective moves in (in)Visible are the performers’ descriptions of what they are doing. “I am trembling,” said a performer behind my back, much like an accessibility-oriented image description on a photo. “I am noticing you,” one told another as they peered across the room toward the sound of a person tumbling. After wrapping an audience member in a section of cloth and putting on that person’s backpack, a performer knelt and, as they did it, stated, “I place my head in the subject’s lap.” And later, “I am dripping sweat on the subject.”

The clinical word “subject” is used several times to refer to audience members as performers touch them. There’s an unpleasant association, for me, with doctors and scientists poking at a patient or object, but with it comes the connotation of distance, of a desire to do things correctly by a given system of ethics. The use of “subject” and the narration of what performers are doing — both of these slowed time in a way that allowed me to actually parse each interaction as it was being named. This is a rare experience, one I don’t often allow myself, in part because I know that if I slow down fully I might feel unpleasant things. I might remember shitty experiences I’ve had in my body, injuries and transgressions, losses of connection to people I’ve loved. 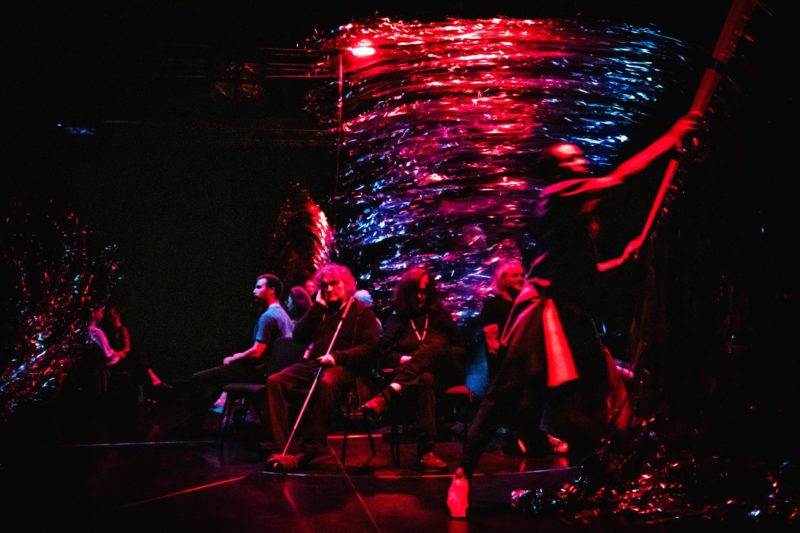 On a stage with low lighting, Gabriel Christian dances in the foreground, swinging a wooden pole with metallic ribbons attached. Behind Gabriel on center stage, a group of audience members sit in a circle; other metallic ribbons are being swung by performers in the background, creating shapes that look like tornadoes. Photo by www.hagolani.com.

But it’s only when I slow down that I can see where I am, that I am actually in one single place at any given time. I keep returning to location. I came home to the Bay Area from Berlin, I saw a show that I’d already seen, and I chose to sit in the same inner circle of chairs. That bit from Harry Dodge continues: “Where we are is fundamental because it comprises who we are. We locate, become relative, and manifest in relation. To accomplish this we need things to crash into.”

There is some crashing in this performance, but it’s heavily padded by prologue and choice. This is ultimately about how much we are willing to set ourselves up to be altered. Truly accessible performance does not make this decision for us, but rather asks us to assess what our individual bodies can withstand in a given moment, based on who and how — physically, concretely, and emotionally — we are.