An Aesthetics of Survival 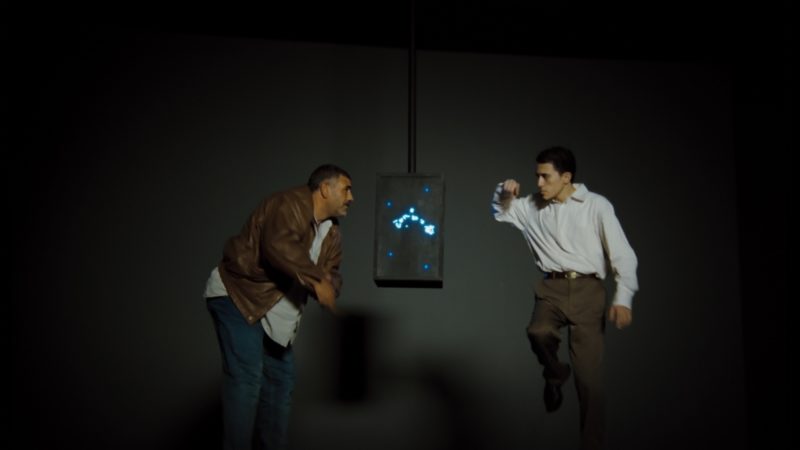 Hassan Khan’s Jewel is often said to be an enigma. The video begins with darting spots of icy blue light against a black background. An anglerfish emerges, bioluminescent and grotesque, swimming in deep, dark water to a mournful, simple soundtrack. A beat is added as the fish propels itself forward at closer range, all glowing fins, spines, teeth, and lure. The creature transforms into an icon of itself, points of light stamped into a rotating loudspeaker. As the music builds in complexity and momentum, the speaker is revealed to be at the center of a room, very much like the one in which the viewer is standing. Two men dance in front of the speaker, their dynamic at once private and communal, symbiotic yet awkward. At times they seem determined to engage directly yet often they look past each other. The older, heavier man wears a leather jacket; his movements are curved and fluid, almost sinuous. The other wears a button up shirt and gestures in straighter lines. They don’t seem to be expressing anger, joy, or even pleasure. They dance with great concentration. The viewer is presented with a charged situation but not invited in. The dancing continues for a few minutes, as the camera zooms out. And that is all.

Visually and aurally mesmerizing, Jewel has appeared extensively in international contemporary art exhibitions over the last several years. I have encountered it in four cities around the world: Doha, New York, Hong Kong, and most recently San Francisco, as part of Soft Power. It is a puzzle to which I keep returning, and I’m not the only one to be entranced — the piece is an audience favorite. Inspired by a memory of the streets of Cairo and appearing just weeks before the Egyptian revolution of January 2011, Jewel has often been read in light of those events, even as Khan has resisted the idea that it can speak directly to that moment. He has often expressed concern about the ways that the global art world can flatten a work and commodify both artists and political events in its hunger for explanations. (See, for example, Read Fanon You Fucking Bastards, an ongoing project begun in 2003). While he expresses a fascination with cultural transmission, Khan simultaneously refuses to represent.

Jewel emerged from a fleeting observation. One sticky summer evening in 2006, Khan was in a Cairo taxi when out of the corner of his eye he saw two men dancing on a crowded street corner. They circled a homemade set up, a large speaker with a lightbulb attached, flashing in time to loud music. That scene, only glimpsed, formed such a vivid mental image and had such a profound effect that Khan daydreamed the work in its entirety during the rest of the taxi ride. “Communication is a mystified, mystifying and highly engaged act,” he wrote in early process notes. “[It] is always, somewhere, absolutely clear and mysterious at one and the same time. And it is this cold heart I want to touch.”

I was among the first to see the finished piece, in December 2010. Khan was one of twenty-three artists commissioned to make new work for a large contemporary exhibition called Told/Untold/Retold, part of the opening for Mathaf: Arab Museum of Modern Art in Doha, Qatar, where I worked at the time. I had visited Cairo for the first time the previous October, a trip which included listening to Khan and others talk about the injustice and unsustainability of existing systems. Perhaps because of this, I read Jewel as a heightened and distilled exploration of the fluid and complex relationship between Cairo as a metropolis — the constant barrage of images, sounds, encounters, histories, as well as palpable political tensions — and its inhabitants. Both the fish’s determined swimming and the men’s earnest, persistent dancing seemed to me to contain a certain urgency, a potential for transformation. While the work was not about Cairo, it was certainly born from it.

Khan aimed to produce a particular representation of Egyptian visual culture at the end of the twentieth century. His annotated process images for the Told/Untold/Retold catalogue include: screenshots of YouTube clips depicting groups of young men dancing in the Cairo streets; a leather jacket “made popular with taxi drivers in the 80s”; “the cheapest ‘decent’ belt the artist could find”; a cassette tape cover of shaabi music (the urban genre he had heard from the speaker); and a photograph of undercover police beating up citizens on the street. “This image,” Khan wrote in the notes, “acts as a diagram indicating how a power structure manages to replicate itself. Thus all characters: victims and aggressors seem identical. […] If we were able to abstract some of these violent movements they would look a lot like a dance.”

Khan worked with his two actors separately at first, developing with each a fluid language of physical gestures before introducing them to the music. He then began a collaborative process of choreographing their conversation through movement. “What was important was that these gestures were always anchored to a sense of communication,” Khan stated in a 2012 interview, “that they were haunted by the world around them even if they were not completely of that world.”

It was also important that the music drive the communicative act. Khan composed and arranged the score, layer by layer, instrument by instrument, using shaabi as his basic vocabulary and forging something new. Shaabi, which combines electronic and traditional elements and literally means “of the people,” refers to a musical genre that emerged from the Egyptian working class urban context of the 1970s. Khan has worked with shaabi in several ways in his practice and (in the same interview as above) has called it an open, generative, and subversive form, “a place of decoys and sublimation […] a place that is not easily reducible.”

I remember walking in to see Jewel for the first time, between installation and the opening, and finding two South Asian construction workers (who had been part of the crew that was finishing the building where the work was housed) in the space, dancing quietly but intently to the music. There was a mop and bucket on the floor between them, a visual echo of the speaker between the two men on the screen.

Actually, I don’t know if this memory is real, or if it is someone else’s experience that I heard about and absorbed. But I see the uncanny double image clearly in my mind’s eye, a testament to the power of the music and the mesmeric quality of the piece, its oblique commentaries on class, labor, and belonging. Doha is a very different city from Cairo, but in that moment, through the artwork, the subjects of two separate, complex systems of (homo-) social control encountered one another; a carefully calibrated dance inspired a spontaneous dance of physical and emotional release.

Seeing Jewel in San Francisco, I am once again enthralled by its strangeness and curious about its melancholic machismo. The anglerfish, alien and ancient, swimming in the cold, deep sea and then fixed into the speaker, is a reminder that extreme conditions produce fierce adaptations. I have read that female anglerfish are the ones with the lure, the luminescent bait to attract both food and mates — each species of fish has her own elaborate structure of filaments and pattern of light flashes, like fireflies, to communicate with her own kind. The females have gaping mouths, expandable stomachs, and teeth like needles, to catch the very little prey that appears that far down in the water. The males are smaller and less fierce. In several species they attach themselves to the female’s body, atrophying except for gills and sperm. Khan has described the connection between the fish stamped into the speaker and the music that plays from it as being about survival in context, but was he thinking about anglerfish sexual behavior as he crafted Jewel? What was his interest in gender and public space? I cannot quite tell.

The men dance forever around the speaker but remain in place, in the same relation to one another. Today they remind me of a Cairene version of Estragon and Vladimir, the main characters from Beckett’s Waiting for Godot. Their perseverance is touching. I cannot help but think that it is almost exactly nine years since the Egyptian revolution began, and from what I understand, that political context continues to shift as much as it remains immovable, closed; existential survival has become a form of resistance. As ever, Jewel provides no explanations — its meanings remain indefinite and unknown. As the camera zooms out, I seem to move further and further away, just as Khan did in the taxi. I too am left with a form in my mind that I turn over and over, a gem that catches a flickering light.